No God. No Treyf. No Conflict. 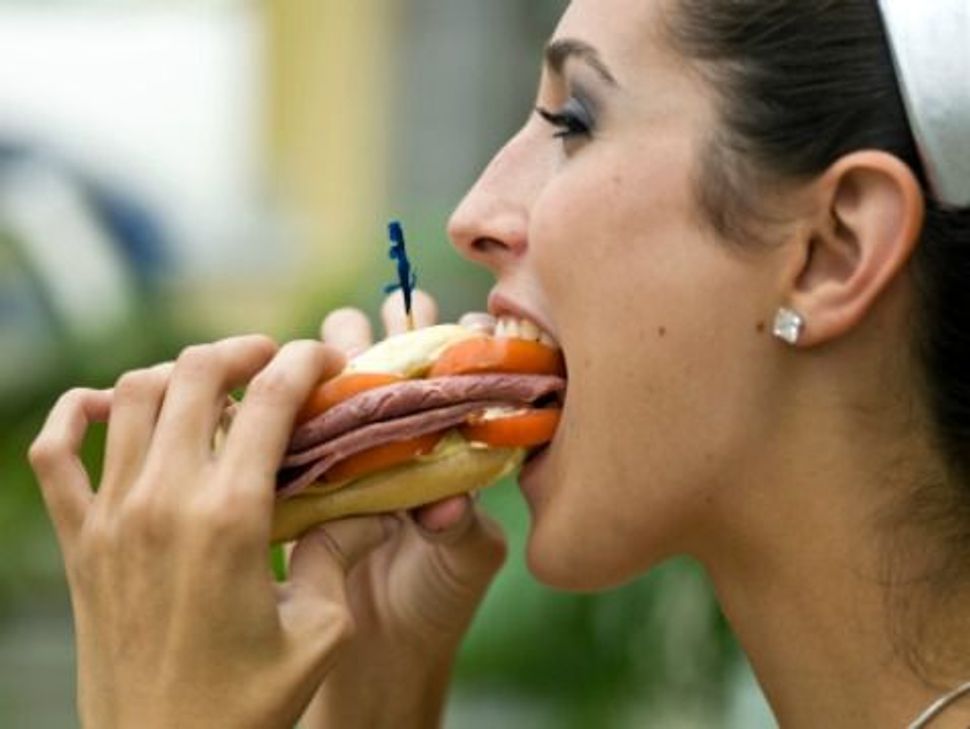 The moment I saw the title of David Meir Grossman’s latest piece on Jewcy.com — “Why I Gave Up God But Still Keep Kosher” — I thought, “Finally! Someone’s going to talk about how faith and custom can be unrelated concepts!” Of course, seeing as Jewishness has as many branches (and twigs and leaves) as a massive tree, Grossman’s thoughtful words didn’t mirror my own experience. Which I should have expected, because for me there was never any God to give up.

Saying I was raised atheist would incorrectly imply indoctrination; I simply grew up without supernatural beliefs, just as I grew up not living in an igloo and not speaking Portuguese. I did absorb the crucial fact that I was Jewish, and that in our family being Jewish meant we celebrated certain holidays, learned certain histories and ate certain foods while avoiding others.

In this, we may have resembled Ezekiel Emanuel, identified in a recent Philadelphia Inquirer profile as a kosher-keeping atheist. Emanuel, the medical third of the exceedingly accomplished Emanuel brothers, refuses to elaborate on his adherence to Jewish dietary laws. “Atheism and Judaism are completely compatible,” he says, a statement as obvious as it is guaranteed to freak people out.

Religion writer Lisa Miller, in a subsequent Washington Post article about this tidbit, interviews two rabbis who support Emanuel’s view, but sides with an (atheist) author who opines that the “mindfulness” of kashrut, or the “transcendent aspects of life,” explains why Godless people maintain the practice. This is, as Grossman points out on Jewcy, “a fundamental misunderstanding of what it means to be an atheist.” It’s also redolent of something ickier.

I assumed Miller was writing as someone currently or formerly religiously observant, unable to separate belief and practice. So I was surprised to discover she came from a secular family similar to my own. Why would she “assign” a spiritual motivation to someone else’s avowedly non-religious habit?

To those who accept faith and tradition, following the laws of kashrut is obeying God. To those who take the God but leave most of the traditions, as Miller eventually did, following them is perhaps admitting a connection with a legalistic, old-fashioned, insular Jewishness they’d rather disassociate from. Those of us in the middle, who never had the God and always had the traditions, disturb this “us vs. them” structure. This is not to say that Miller herself thinks this way, only that her analysis renders us invisible.

Why do I keep kosher, then? Tradition, for one. My mother was not particularly dogmatic, except about things like not picking flowers. (“What if everyone took one?”) But I understood kashrut was important to her. Her parents, who did not attend Synagogue and never mentioned God, nevertheless owned four sets of dishes. My grandmother emulated her mother who emulated her mother, until the sepia photographs run out and the trail enters the realm of Bible story, of myth. Then it becomes a deeper tradition, a recognition that those ancient Jews may have known a few things. Paying them a small tribute by conducting my life in a manner that commemorates theirs is hardly an inconvenience.

Also, keeping kosher irks people. It bothers some Jews, but mostly non-Jews — otherwise friendly types who react with visceral disgust to my non-consumption of cheeseburgers. I know a Norwegian (online only , thankfully) whose objections to Jewish practices are as predictable as they are harsh. She is a devotee of Krav Maga. How do you explain to someone that her workout was created for Jewish self-defense against the physical manifestation of her own prejudices? You don’t. You simply become more convinced that skipping the lobster is not simply a personal preference, but a worthy fight.

There’s something else, too. When I unintentionally eat more strictly than my usual “mostly kosher” routine, I feel better. It isn’t a physical or moral feeling, and it certainly isn’t “transcendent.” My transcendent side appreciates music, art, literature and nature — pretty much anything other than pondering whether marshmallows have gelatin in them.

No, it’s the sort of better you feel when you behave in accordance with who you are. When you quit a miserable job, or wear something that’s really “you,” or realize that you don’t have to stay at boring parties full of people you dislike. An intangible feeling, yes, but fully earth-bound, fully human.

No God. No Treyf. No Conflict.