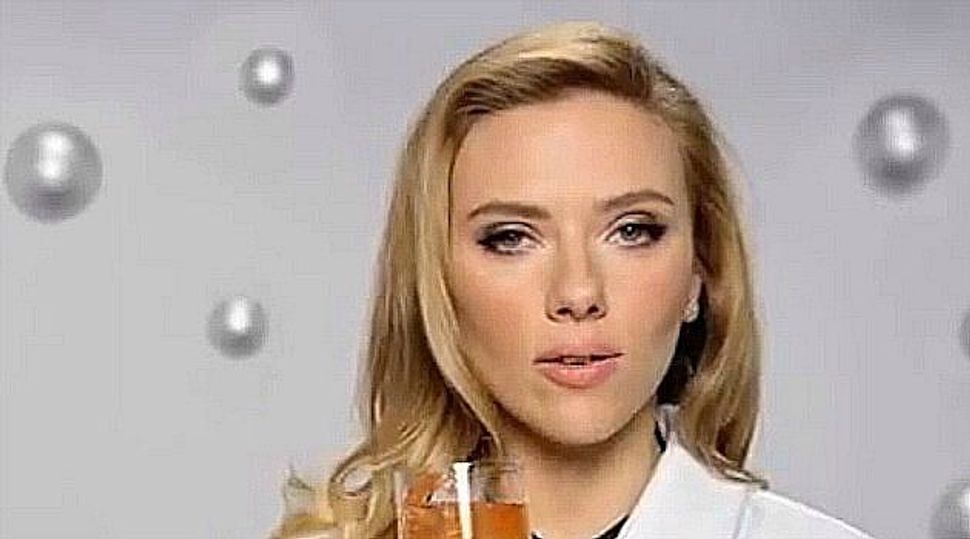 No matter where you stand on Israeli politics, it’s hard not to see Scarlett Johansson’s decision to become a spokesperson for SodaStream as a bold choice.

Unfortunately, this boldness didn’t make its way into the commercial itself. Instead, the ad relies on the most cliche, ickily retro advertising tropes imaginable.

If you are reading this you have probably have already seen the spot. If not, spare yourself the 33 seconds and allow me to summarize. We meet Johansson on a set, where she is wearing a full face of make-up and a crisp, white robe. She runs through the environmental and health benefits of the product, and then, changing gears to a more girlish voice, says “if only I could make this message go viral.”

The robe slips off, baritone-voiced soul music pipes in, and Johansson walks up to a stage where she begins to make out with her straw, coming up for air only to say “sorry Coke and Pepsi” in a tone that suggests she is bidding adieu to aggrieved ex-lovers. Yech.

Except the irony, if even intended, doesn’t really come through. What is clear, however, is Johansson’s pillowy lips moving up and down a straw and, well, that’s enough. The woman played a cyborg with very believable sex appeal. You know what she is capable of.

There is a lot riding on this campaign, for Johannson and the company. They must have spent a lot of money on the sultry-voiced actress, and she gambled some serious political capital aligning herself with a business that is based behind the Green Line.

What SodaStream’s got going for it, location of one of its factory aside, is it’s progressive values. It’s product represents a greener future, a more progressive and mindful way to live, all the while Coke and Pepsi are still wasting fossil fuels shipping sugar water around the world. Too bad then that this commercial, its big attempt to go mainstream, didn’t message any of those forward thinking values. Instead, they came off looking just like all the those sugar-water peddlers they so desire to eclipse.