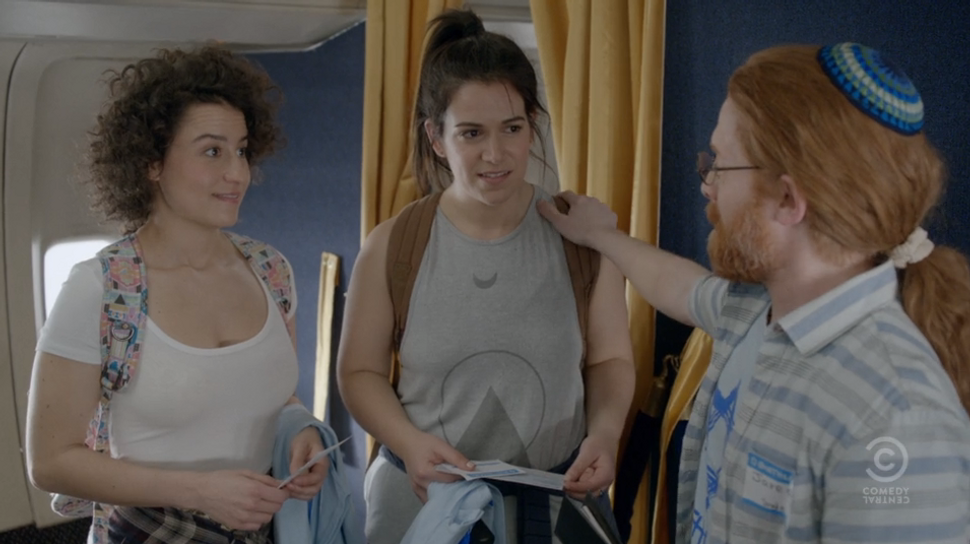 When Ilana and Abby from “Broad City” announced last week that they were going on Birthright Israel, my heart sunk.

For those who haven’t been watching, the show follows two young women from New York as they make their way through life in Manhattan. Main characters Abby and Ilana are Jewish, and their heritage is a central part of many of the show’s gags. Much like Golden Globe-winning “Crazy Ex-Girlfriend,” the characters’ New York Jewish heritage is neither fetishized nor exoticized but is instead a well-integrated part of the humor throughout.

Last week’s episode showed the pair running to catch a flight, the destination of which was kept a secret right until the end. But we soon figure out that their “Birthmark” trip is actually Birthright Israel, the all-expenses paid 10-day trip to Israel offered free to all young Jews worldwide ages 18-26.

The critiques of Birthright are numerous, and just this week a new Jewish-led effort to stop American youth from signing up for this transparent propaganda tour was released. The heart of the problem is that Israel is built on the dispossession of Palestinians from their homeland, and today more than 5 million Palestinians who were driven out of their homes in 1948 and their descendants are still refugees. Israel forbids Palestinian refugees the right to return to their homes, in direct contravention of international law.

Thus, while Israel allows Jews born anywhere on Earth to move to Israel and automatically gives them citizenship, Palestinian refugees — including those born in what is now Israel — are forbidden from returning.

With a budget of nearly $50 million a year, Birthright has taken hundreds of thousands of Jewish youths over the last two decades on its whirlwind trips to Israel. Critics charge that Birthright conflates Judaism and Zionism and encourages unconditional Jewish support for Israel by offering a misleading and blatantly propagandistic narrative of Israeli history that erases Palestinians while glorifying Israeli atrocities.

Like it or not, however, Birthright is a major part of Jewish life worldwide today, and it’s not surprising that this virtual rite of passage is increasingly making it into the media.

To my pleasant surprise, “Broad City” addressed Birthright — and the Jewish American relationship to Israel — in an extremely critical way. The episode’s critique highlights the sea change in US popular opinion on Israel that has occurred in recent years, particularly how common public criticism of the country has become among American Jews. If Bernie Sanders’ recent comment on the need to treat Palestinians with “respect and dignity” was a major opening in the political realm, the “Broad City” Birthright episode is its pop culture equivalent.

“Broad City” didn’t just go on Birthright; it spent 21 full minutes mocking it. The show called attention to the disturbing militarization of Israeli society and attacked the idea that American Jews must necessarily feel a commitment to a country that tries to represent itself as the state of the Jewish people. And all of this was done in the classic “Broad City” brand of humor, without ever seeming too preachy or even political.

From the moment the episode begins — showing the pair stuck on a plane full of (really annoying) teenagers accompanying them on the trip — Abby and Ilana can’t stop making fun of Birthright. On last week’s episode, the tour guide explained that the trip was oriented toward the “reproductive future” of the Jewish people, after which participants began chanting “Jews! Jews! Jews!” to Ilana and Abby’s horror. The gag continues this week, as the trip ends up looking like an extended, in-person, and even more awkward version of J-Date. Trip participants are seated according to marriage eligibility, which involves pairing male and female Ivy School graduates with each other (and forcing Abby and Ilana apart).

One of the participants proposes to the girl sitting beside him right there in the plane, having brought a wedding ring just in case. Meanwhile, Ilana gets in an argument with the tour leader, during which he admits that he couldn’t care less about marriage but gets a commission for every couple that gets hitched, and a bonus if it happens on the plane before arrival.

Abby soon realizes that she has had her period and is in trouble because all of her tampons are in her carry-on bag, which she was forced by the El Al look-alike airline to check in. The pair devise a plan to snatch a box of tampons they notice in the plane kitchen, but in the resulting chaos end up physically restrained and arrested by the stewardesses who felt the two were acting suspicious.

The episode ends with Abby and Ilana being interrogated at Ben Gurion Airport in Tel Aviv, probably one of the few times in US history that an Israeli interrogation has been shown in a comedic format. The show thoroughly mocks Israel’s approach to security and makes the two interrogators look like over-zealous buffoons.

It’s hard to miss the irony of the fact that Abby and Ilana’s first experience in their purported “Jewish homeland” was far more akin to the welcome that Palestinians or others of Arab and Muslim heritage get if they try to visit.

Indeed, while critiques of US media portrayals of Israel often focus on the fact that Israelis are humanized but Palestinians and the occupation totally ignored, in “Broad City” we don’t even get to that point. The only Israelis we meet are the two security agents – and they end up deporting our protagonists straight back to the US.

On the plane back, flying under armed guard, Abby and Ilana look at each other and say: “Israelis really like their guns. Guns are so gross. I’m really glad we’re going back home.” The two pause for a full second or two, and together say “Hm,” putting an extra stress on the words.

They continue: “There’s actually this restaurant on Steinway that makes falafel that I heard is even better than the real deal. Let’s just go there.”

The pair assert that New York is their home, and nothing Israel can do or say can change that fact. What seems like a simple statement is actually a powerful challenge of Israel’s claim to be the be-all and end-all of Jewish identity.

Much like the worshipers at a French synagogue who responded to Israeli Prime Minister Benjamin Netanyahu’s speech imploring them to move to Israel by loudly singing the French national anthem, “Broad City” has boldly refused to allow Israel to define their Jewish identity and in so doing has powerfully debunked the narrative that being Jewish is necessarily associated with the country.

It’s hard to imagine a Birthright episode of this fabulous, feminist stoner comedy going any better.

Alex Shams is an Iranian-American journalist and a PhD student of Anthropology at the University of Chicago.