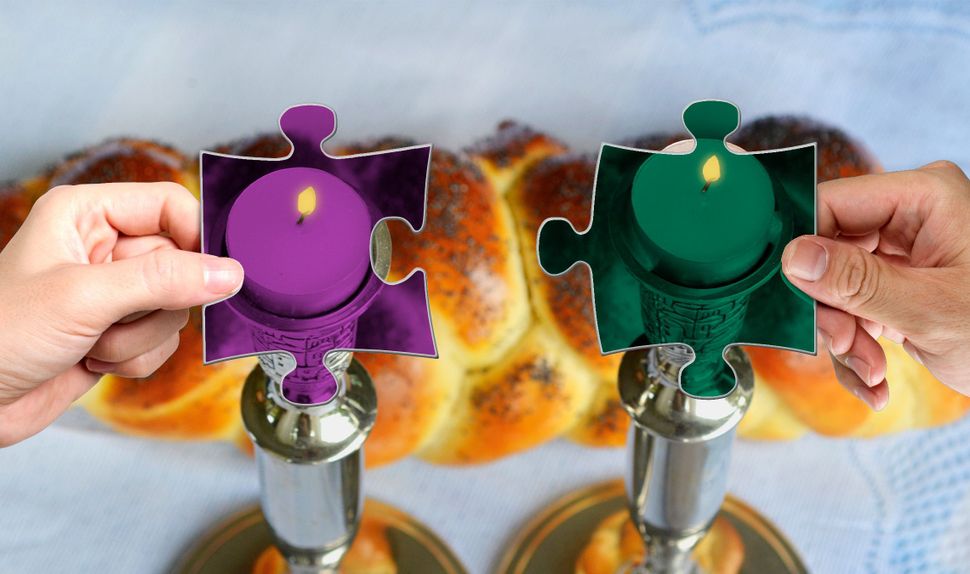 “I know my husband uses the microwave on Shabbat,” a friend told me, after I shared my story of being in a mixed secular-religious marriage, “but he makes sure to do it while I’m out of the house at shul.”

While this bifurcated approach may work in the short term, where the less observant partner does his or her own thing in private while the more observant one pretends to look the other way, I think it’s a recipe for resentment.

The better solution – and the one that’s worked for my marriage – has paradoxically put the onus more on me: to find secular meaning in traditional Jewish rituals. Then we can share the same religious activities while interpreting their significance differently.

The big three are taharat mishpacha (the laws of family purity), kashrut (keeping kosher) and Shabbat.

Family purity might seem like a deal breaker: why would a now non-observant person like me agree to forgo sex for half of every month until after my wife has visited the ritual bath?

When we were newly married and both religious, it was just what you did. It wasn’t until years later, when I was questioning everything, that we realized that the externally mandated ebbs and flows of menstruation and mikveh enriched our sex life. It gave us a fresh start every month, a moment to anticipate, and a structure that we chose to adhere to even when I no longer believed in the halachic (Jewish legal) imperative.

Keeping kosher is a tougher one. The way I’ve come to understand it, the underlying purpose of the laws of kashrut is less about holiness and more about keeping Jews and gentiles apart. The Torah gives no reason why certain animals are kosher and others aren’t. Rather, it’s a test of faith.

Kashrut has done an excellent job achieving its goal over the years but that mission – particularly in Israel where I live – seems less relevant today. (It has also gotten so mired in politics as to drive people away.)

Still, it’s important to our community and friends and it’s not that hard to keep a kosher home. While traveling or eating out we are more flexible. In any case, my wife Jody is a vegan, which has become a sort of secular kashrut for many people with a modern meaning we can both get behind: not harming animals and inflicting less damage on the planet.

Coming every week without fail, Shabbat is probably the biggest topic of potential friction in a mixed marriage but I love how Jewish tradition marks the weekend as a “day of distinction.” I don’t need Jewish law to tell me that (mostly) turning off electronics for 25 hours brings enormous benefit.

You just have to compare a weekday meal with Friday night.

During the week, the phones are out and, even though we have a “no screens at the table” policy during family dinner, the dopamine demand of each pocket vibration or the hypnotic pull of a far off ding often proves to be too much – even for me.

On a Shabbat at home, though, we can spend hours just talking, eating and having fun together. The kids play card games, while Jody and I catch up on reading. Friends drop by and we spend quality time together. We walk the dog without being plugged into a podcast obsessing over whether Adnan did it or why Bowe walked off his base.

In this respect, I find comfort in the writing of Judith Shulevitz, who described her ambivalent relationship to Shabbat in the book The Sabbath World, or the secular-friendly National Day of Unplugging.

I don’t go to synagogue much anymore and I sit quietly at the table if others want to say the grace after meals, but I wouldn’t give up the peace that a traditional Shabbat provides for anything.

I may pull out my iPad to read one of the dozens of eBooks I’ve downloaded, but at least for now, I’ll do that in private, not because I’m fearful or afraid of offending, but because I’m choosing to.

I’m grateful and don’t take for granted that Jody values my post-modern quest for Jewish authenticity. That’s her part of the compromise, too, and it’s no less significant.

Making a mixed marriage work means moving past the binary and eschewing either-or declarations. It means embracing change and not knowing precisely where you’ll end up. A successful mixed marriage may very well be the truest demonstration of love. I know it is for me.

Brian Blum is a freelance writer who specializes in technology, start-ups and the entrepreneurs behind them. Originally from the San Francisco Bay Area, he lives in Jerusalem with his wife and three children. More at www.bluminteractivemedia.com