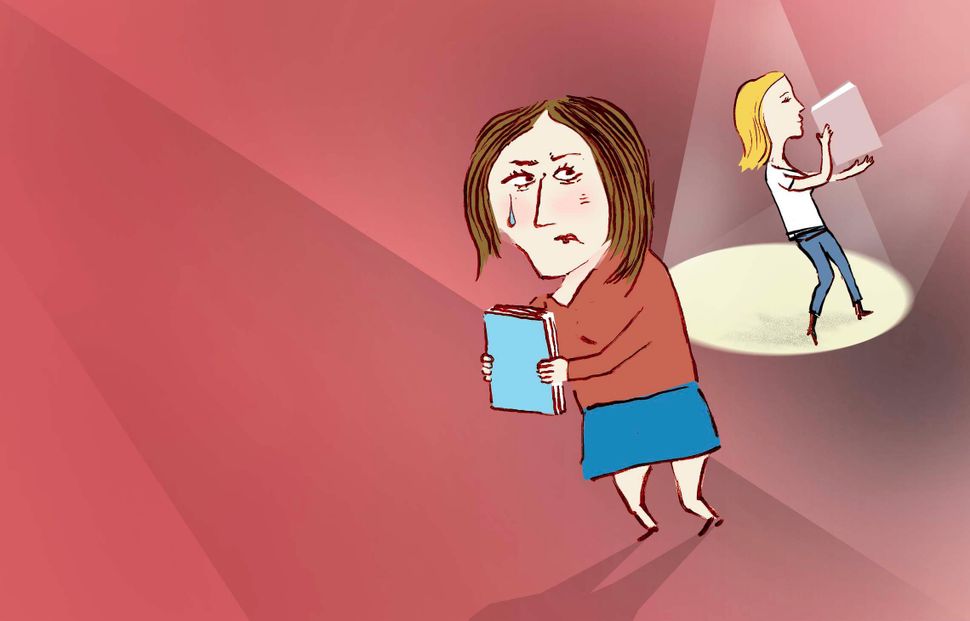 Jealousy’s a … difficult thing for everyone. Image by Kurt Hoffman

What interests me about what would otherwise be a bruised-literary-ego scandal with few stakes is the way Weiner presented her insecurities about this missed achievement. The slight was, Weiner suggested, on some level, at least in her own mind, about not being pretty enough. About not meeting certain, ethnically-coded beauty standards. In the Jezebel-captured version of one of Weiner’s controversial-but-deleted posts, she mentions “a voice in my head (a small, sad voice) that sees a slim, blond, traditionally attractive woman getting something great and thinks, Oh, well, of course.”

So. While there are, of course, Jewish women of all sizes, hair colors, and levels of traditional attractiveness, there’s something very Jewish about this remark. Partly it’s that “small, sad voice” may be a Biblical reference. But it’s also that the role it evokes, the brunette sidekick to the pretty, chipper blond, has long been intertwined, in stereotype and pop culture, with American Jewish female identity. Weiner places herself in that role with respect to the writer who did get picked, Glennon Doyle Melton, who is—and I’m going here by a blog post which includes the sentence, “I love my Jesus”— not Jewish.

I’m reminded of a scene from “The Mary Tyler Moore Show” where Rhoda tells Mary, a fellow brunette, she (Mary) has a blond personality. I’m reminded, that is, because Weiner’s persona is very much that of a Rhoda, the archetype of the smart, funny Jewish woman who struggles with her weight.

Does this form of Jewish female self-deprecation now, four decades after that show’s finale, come across as passé? I—old-millennial, Ashkenazi—can relate to it on a personal level, but would younger Jewish women (or ones who watch less 1970s television) find it bizarre, or even an appropriation of the beauty-standards concerns of women of color?

Perhaps so: In “Broadly,” Lauren Oyler brings up an interview where television producer Jill Soloway said, “‘I only want to write about somewhat unlikable Jewish women having really inappropriate ideas about life and sex.’” To which Oyler responds, “This is the kind of thing that elicits cheers from the feminist corners of the internet, but to me, it doesn’t sound radical. It sounds like Girls.”

The place of Jewish women in pop culture, on TV in particular, isn’t what it was in the 1970s, not with shows like “Girls” or “Broad City,” and not with a cultural climate (crucial exception: the alt-right) that tends to view pale-skinned Jews as white and nothing more. Lutkin highlights the fact that Weiner, who’s protesting being overlooked due to non-blondness, is nevertheless white: “While many of us can probably relate to Weiner’s feelings, in whatever area of our life it resonates, she is still an extremely successful white cis female writer.” Which, yes, she is.

Phoebe Maltz Bovy is an American writer living in Toronto. Her book, “The Perils of ‘Privilege,’” will be out with St. Martin’s Press in Spring 2017.