Taylor Swift Probably Isn’t Jewish But Very Well Could Be 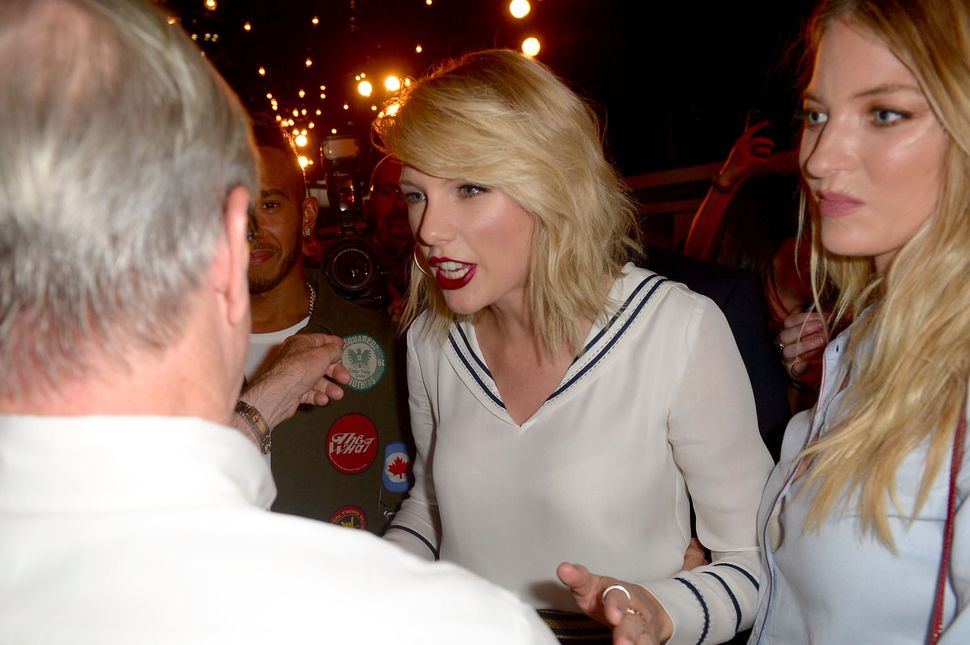 With online anti-Semitism running rampant, and with this evening’s presidential debate likely to make life in the public sphere that much more delightful for Jews, the question is, what do we do? How do we cope?

I urge you to read journalist Ned Resnikoff’s Medium post, “Nobody talks about the fact that Taylor Swift is Jewish. Here’s why it matters.” I urge you to do so even though the piece is from August (it remains timely) and ask that you read on, even though I’m about to violate the humor code and explain a satirical article.

At this point you may be thinking, huh, Taylor Swift’s Jewish? How has this fact not yet made its way into Jewish publications’ Jewish-celebrity coverage? So I will get this out of the way: Resnikoff’s piece is what’s referred to as trolling the trolls. Specifically: the neo-Nazi trolls who’ve decided, on the basis of no particular evidence, that Swift is a secret Nazi, turning the innocuous-enough, ubiquitous singer whose voice used to accompany me on grocery trips back when I had a car and lived in suburbia into an icon of “Aryan”-ness. (See Brian Schaefer on the bizarre phenomenon.) By all accounts Taylor Swift is not Jewish, and Swift wasn’t changed from “Swiftowitz.” Resnikoff’s just offering up a scenario that would devastate Swift’s white-supremacist admirers.

But I’m not doing the story justice. Have a look:

“I know Taylor Swift is Jewish because my friend’s cousin was at her Bat Mitzvah. It was held at Temple Beth Keshet in the suburbs of Philadelphia, and it was reportedly extravagant even by upper middle-class reform standards. The spread, I’m told, was fantastic. As for the live band … eh. It was nothing to write home about.”

Resnikoff’s article riffs off a grand tradition in the Jewish press, wherein it’s announced that a celebrity (bonus points if it’s a beautiful blond woman) is, in fact, Jewish: Scarlett Johansson, Gwyneth Paltrow, Bar Refaeli, others I’m too old-millennial to have heard of. That these women, not just blond but icons of blondness, are actually Jewish ought to give a clue as to why it’s entirely plausible Swift could be as well.

Those look-a-blonde-Jew stories can be annoying to those of us who are Jewish women who do not, with our appearance, shatter stereotypes about what a Jewish woman might look like. (Imperfect analogy for reasons I’m about to spell out, but imagine responding to anti-black or anti-Asian racism by pointing out that some people of color “pass.”) But there’s also something subversive about the trope. Nazis hated Jews for looking less “white” than non-Jewish Europeans. What if, on the whole, we don’t? If nothing else, there’s something ironic about the fact that so many of the female celebrities held up, in our racist society, as ideals of “white” beauty are Jewish (or Palestinian).

So Resnikoff also mirrors (that is, in this case, mocks) the approach white supremacists have taken to Swift. Where neo-Nazis insinuate that Swift’s one of theirs, based on nothing more than the desire for that to be the case, Resnikoff offers the following airtight case for Swift’s tribe-membership:

“As for ‘Blank Space,’ is it possible the title of that song refers to Swiftowitz’s ambivalence about the erasure of her Jewish identity? I can think of no other plausible reading.”

Will Jewish humor save us from Trump’s Twitter brigade, and the potential horrors of a Trump presidency? Likely not, but it’s needed now as much as ever.

Taylor Swift Probably Isn’t Jewish But Very Well Could Be