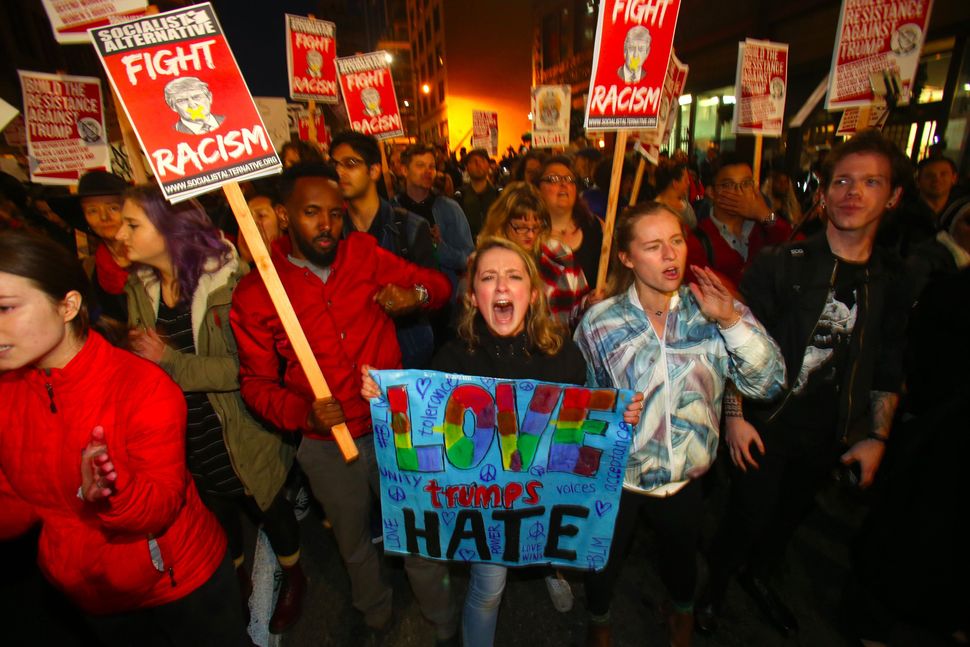 Not without a fight. Image by Getty Images

It’s Thursday, so I have some links for you, Sisterhood readers. A female presidential candidate — not a Jewish one, but one who received a whole bunch of anti-Semitic attacks, on her and her supporters — was just defeated. I’m still grappling with that, and would not be surprised if you are as well.

-Have your tears from Clinton’s concession speech dried? Get ready to sob again: Stephen Hiltner writes about the New York Times “Madam President” headline that never was. There’s a photo of the mock-up of that cover. “To some, the image you see here is a painful reminder of a historic presidency that did not come to pass.”

-On Buzzfeed, Doree Shafrir reminds: “White women may have voted for Trump, but Jewish women did not.” Shafrir writes powerfully about the new anti-Semitism. Read the whole thing.

-Aaron Sorkin wrote a letter to his daughter and her mother, except not just to them, because it’s in Vanity Fair. He’s furious about Trump, as an American and as a Jew, which is fantastic. That he addresses his 15-year-old daughter and a grown woman (his wife? his ex-wife?) as the “Sorkin Girls,” and that the whole thing reads as if it was written to two children, and then is signed “Dad,” is a bit less so, but I’m feeling indulgent towards anyone who’s on the right side of this mess.

And now, some moderately lighter news from across the pond:

-Prince Harry’s girlfriend, Meghan Markle, is older (than he is), American, black, and… a resident of Toronto, all facts one might find surprising if one is familiar with how British royals tend to do things. (If the couple needs any Toronto coffee-shop recommendations, I’m available!) On a more serious note, tabloids and trolls have been harassing Markle and her family, and there’s now an official royal document telling them to back off. Progress!

-In the New Statesman, Amelia Tait responds to news that New Balance supports Trump with a clever ranking of shoes from most to least fascist. As the owner of non-Hunter rain boots (and nothing Ivanka-branded, ever, thanks), I’m feeling OK about the list. Not about the state of the world, but my footwear choices. It’s something.