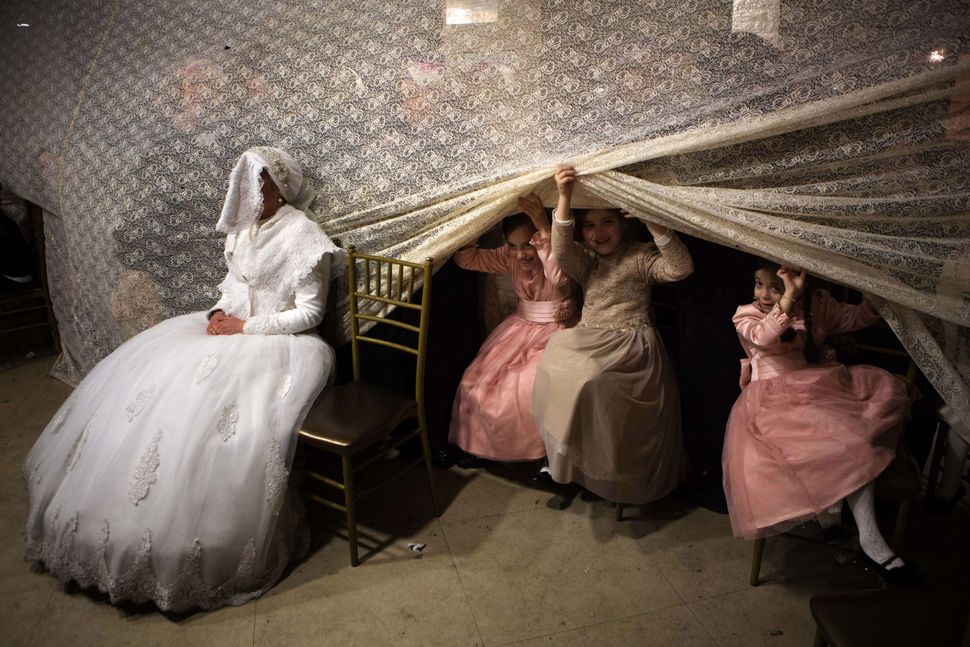 It’s a mix of serious and silly for the more frum among us. Image by Getty Images

Observant Jewish women lead day to day lives that are different from the “mainstream.” They pray frequently, keep kosher, observe the Jewish holidays, exclusively wear skirts and dresses, and cover their hair. Instead of hooking up with people through Tinder and Bumble, they’re hiring shadchans (matchmakers) and asking their rabbis for matches. While other women their age may be partying at the club on a Friday night, they’re eating with friends at the Shabbat table.

A wide range of situations involving womanhood and leading an observant Jewish life pop up in #FrumGirlProblems, a private Facebook group with 6,000-plus members.

Started two-and-a-half years ago by moderator Jenna Bazelon, 25, the group features members posting about every day occurrences, questions they have about Judaism, funny Jewish memes, and products that the others may enjoy. On a typical day members may link to modest dresses on Amazon, invite local women to their homes for Shabbat meals, talk about how they deal with coworkers who ask about hair coverings, and joke about their bad dating experiences.

Bazelon, who grew up in a culturally Jewish home in Chicago but later took on more observance, started the group with a friend after she went to seminary in Israel for eight months. “When you become frum (devout), you notice things that other people wouldn’t notice,” she said via a video interview. “You see frum people all the time and feel like you’re part of something.”

There wasn’t an outlet where Bazelon and her friend could go to discuss their frum observations and crack jokes about their lifestyles, which they had been doing through text. “One of our jokes was, ‘Is that a kippah or a bald spot?’” she said. “We thought that other people might have funny things that happened to them too.”

The kippah quip became the tagline of #FrumGirlProblems, which is only for observant Jewish women. Bazelon, who said that the women in the group are an average of 30 years old and live around the world, screens every member who requests to join. She makes sure they are not men or fake profiles. “I look for certain things like the numbers of likes on a profile picture and whether they’re in other groups that are remotely connected to observant Judaism.”

Bazelon also reviews the posts before they go up. She’ll delete advertisements, personal tehillim (book of praises/prayer) requests, and anything that’s too personal or not related to Judaism.

The most popular posts are about dating, modesty, and hair covering. “There’s a lot of lighthearted jokes in good spirits about things that are hard,” said Bazelon. “For some people, it’s kashrus [kosher] or tznius [modesty] or Shabbos. It’s a big sacrifice for them and they like to laugh about it.”

What Bazelon most enjoys joking about is dating. “It’s the biggest challenge for me right now but it also gives me the best material,” she said.

Since #FrumGirlProblems has grown so rapidly, Bazelon is considering expanding it to other platforms, though she has no concrete plans yet. She said, “I get a lot of pressure to grow it. There is a huge need for positive, healthy support for frum women. There’s a need online and off. I do feel like this is an opportunity to provide that.”

Currently, she’s a medical recruiter in New York, and spends 10 to 15 hours a week on the group. In Chicago, she was a social worker and came across frum women at her job. This gave her some insight on what they go through, and encouraged her to be involved with her community.

Because Bazelon became observant in her early 20s, she didn’t grow up with preconceived notions about the Orthodox world, she said. “I have a unique perspective. Since I’ve become frum, I’ve been passionate about bringing positivity to the Jewish world.”

Through #FrumGirlProblems, Bazelon is able to fulfill her mission. “I’ve been told that people feel connected to other women through the group,” she said. “They feel like it’s comedic relief and provides a sense that they’re not alone in these challenges.”

Kylie Ora Lobell is a super Jewess and freelance writer living in Los Angeles. She’s been published in The Washington Post, The Jewish Journal of LA, Tablet Magazine, Aish, and Chabad.