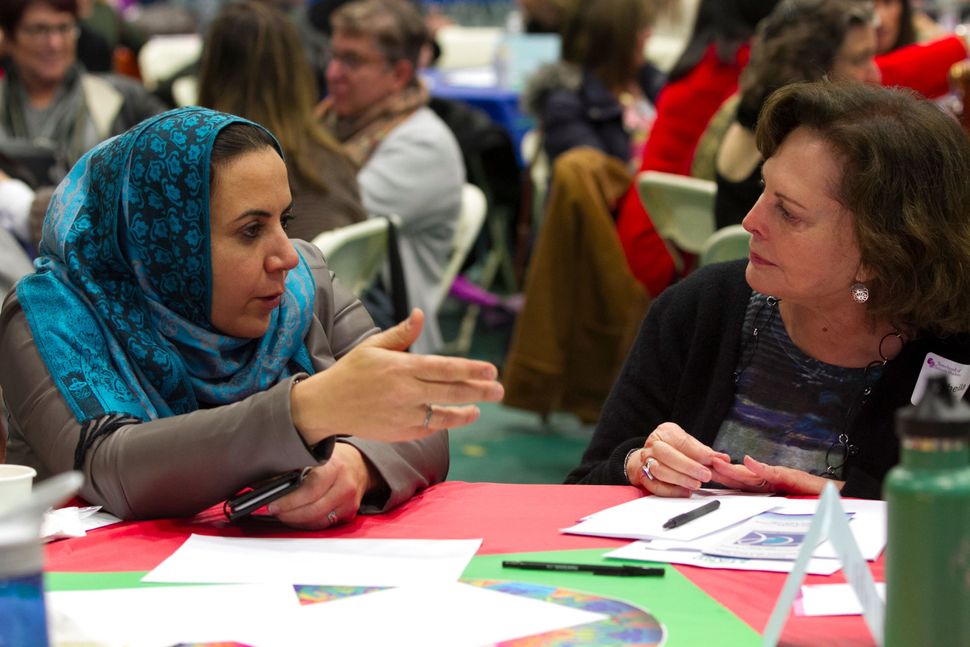 In 2010, Sheryl Olitzky, a marketing professional, who had worked in marketing throughout her career, decided to start an interfaith dialogue group for Jewish and Muslim women. She sought advice from various people who had experience with putting together these types of groups. One of them, Eboo Patel of the Interfaith Youth Core, told her that with a project like this, she should give herself three years to succeed. Three years and a week after she started it, her group, the Sisterhood of Salaam Shalom was on the front page of the New York Times. The story included photos of the national conference the organization held at Drew University in Madison, New Jersey on December 4, 2016. The conference was attended by almost 500 Jewish and Muslim women, up from 100 at the first conference two years ago.

Olitzky began the Sisterhood of Salaam Shalom. which has 50 chapters in 20 states and is continually expanding, after a return from a trip to Poland. Olitzky put the trip together in 2010 to bring others after she had gone with the NATIV gap year Israel program sponsored by United Synagogue Youth the prior year. She told me in a phone interview in early December that as a Jew visiting Poland, she was upset at the overt signs of hate she saw, the anti-Jewish graffiti, and the Jewish dolls she saw for sale all over the country in drugstores, grocery stores and souvenir shops. These dolls who had long white beards, peyos (sidelocks), and carried money bags. She said to herself, she told me, that while she “can’t change the past, I can change the future.”

On her return, she decided that she would do what she could to stop hate in the US: “No one should be made to feel afraid.” Her first phone call, she said, was to a local imam in her central New Jersey hometown. She wanted the phone number of just one woman at the local mosque to talk to. This is where the story of her organization begins.

In our phone conversation, Olitzky described what happened when she first tried to call Atiya Aftab, now the chair of the board of directors. “I called her three times, and was thinking why doesn’t she call back? What I later found out was that she was wondering ‘who is this lady bothering me?’” Finally though, Aftab responded and told Olitzky that her faith commanded her that when someone from a different religion reaches out she is obligated to respond. After Aftab returned the call, Olitzky and Aftab then met to chat at a coffee shop. They had sons who had been in the same grade at the local public school, but had never met. Olitzky recounted to me that in that first conversation, one of them said something, the other said, “yes I feel the same way” and that it was “as if we had known each other forever.” Each of them invited five women to be part of the first chapter.

The aims of the Sisterhood of Salaam Shalom are threefold: dialogue, socialization and community building/social action. Olitzky explained each of these pieces, telling me that “research has shown these three aspects are necessary for relationships.” The reasons to go about things with these guiding principles? Olitzky explained: “Dialogue is about listening with your heart not your ears. Socialization, breaking bread is among the best ways for people to really feel comfortable and feel safe. Community building is having a shared goal to make the community a better place.”

Olitzky said that the desire of both groups is give individuals a chance to act by getting to know those in other faith groups and to “to change the feeling of vulnerability by making sure there is a unified voice of women of faith, who are standing up and taking charge.” She added that these goals give the group a sense that they “have the same goal we are both working at.”

She went on: “Hate isn’t a new thing. The environment we live in today is not new. The way the Sisterhood [of Salaam Shalom] responds is new. What we believe is that if you give Muslim and Jewish women a safe space to really know each other, develop intense relationships, and because of those relationships they will stand up for one another and be upstanders to hate.” She added that this is uniquely female attribute as “women navigate the world through relationships,” explaining that her husband says “women are from Genesis and men are from Leviticus, women do things through relationships and men through rules and regulations.”

A few days after our conversation, Olitzky had the opportunity to present First Lady Michelle Obama with the business card for the Sisterhood of Salaam/Shalom at the annual White House Hanukkah party.

Beth Kissileff is the author of the novel Questioning Return and the editor of anthology Reading Genesis. Visit her online at www.bethkissileff.com