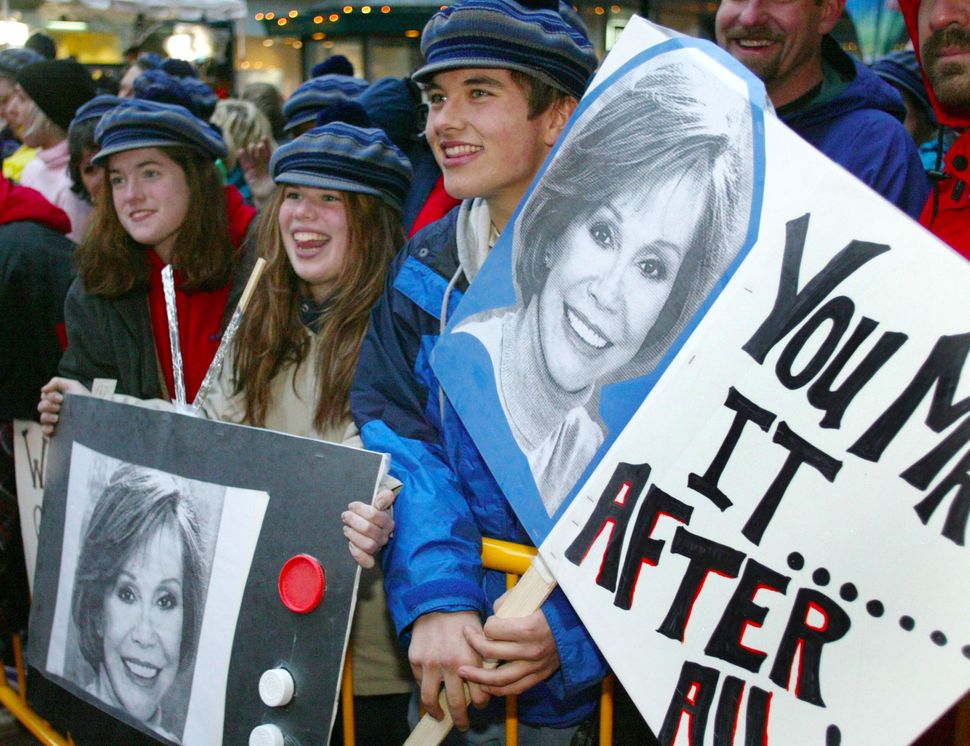 Have we moved backwards since the days of “The Mary Tyler Moore Show”? Image by Getty Images

Ever since reviewing Ruth Whippman’s book, America the Anxious, I’m attuned to the concept of happiness, and to its centrality in American life. I thought of it most recently when reading Heather Havrilesky’s recent Ask Polly column, “Ask Polly: I’m Pretending I’m Happy Single, But I’m Not!” The letter-writer may look like a proud, independent single woman, but her inner life goes otherwise: “I still grumble bitterly when I have to move out of the way of some happy couple on the sidewalk, or when I just feel too exhausted from a long workday to carry the groceries to my fifth-floor walk-up apartment all by myself.”

What does it mean to be happy about a life situation that cuts against what society demands? To be happy single or childless? To be fat and happy, or at a not so prestigious college but happy? There’s on the one hand how someone feels, which may be super complicated but is above all unknowable from the outside, and on the other, the face they’re presenting to the world. And manners dictate… well, what, exactly?

Sometimes social pressure leads those in these situations to pretend to be happy about a situation that is actually causing them a great deal of pain, as in the Ask Polly letter. Other times, it leads those who sought out the unconventional situation to play along with the notion that they wish things were otherwise, and to pretend they’re not happy when they are. That would be the single friend who agrees that she wishes she’d find the right man, when she’s actually not looking for one, never was, and just doesn’t feel like explaining this (or has but you weren’t really listening).

More commonly, though, life is a tough-to-disentangle mix of what we want, what we think we should want, and what we’re actually happy with. Sometimes people are happy, or happy enough, in situations others would expect to make them miserable, and the unhappiness their situation brings them stems from others’ expectations.

In the Washington Post, Emily Shire reports on the difficult lives of single modern Orthodox Jewish women, and finds just that situation. (She interviews, among others Sharon Weiss-Greenberg, of Forward 50 fame.) Writes Shire, “[T]he bigger issue for a modern Orthodox single woman may not be her relationship status, but how she is treated by her community because of it.”* Apart from not having a spouse (which is absolutely all that “single” ought to entail), the single women profiled describe a more general exclusion from social and communal activities. No one, male or female, secular or pious, is entitled to a spouse. Everyone is entitled to, well, a life.

Is there a way out? There are certainly hints of one. The first: a New York Times real estate story about modern Orthodox roommates. The women are “25, 36, 31 and 36” and appear to be having a great time: “[C]amaraderie is as much a part of the apartment as are the kosher kitchen and the Friday night Sabbath dinners,” explains one roommate.

The secular world offers another option, currently being vigorously debated by some Facebook friends and friends-of-friends: Self-marriage. Yes, like on “Sex and the City.” Is it a consumerist invention of those selling self-marriage classes and self-wedding registries? Perhaps. But it’s also an opportunity for the single and happy-enough to make a public statement about not finding their lives as tragic as all that.

*The piece discusses the gender disparity, but not why there are more single Orthodox women than men, but a linked article spells out that this relates not to male secularism but rather to a high birthrate and the relative age of first marriage for men and women in the community.)