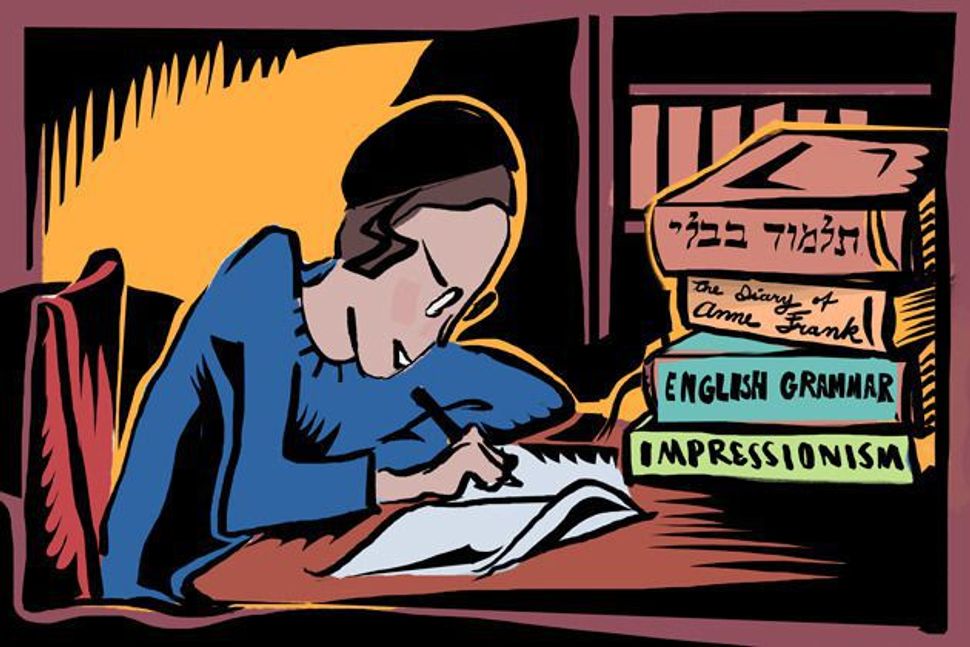 When I got married, I decided to speak Yiddish to my children, and not just any Yiddish, but my husband’s “heymish Yiddish”; in other words – Hasidic Yiddish.

I was able to carry out my plan quickly since I was marrying a divorced father of three, so I inherited three stepchildren. By the time my own children were born, Yiddish had long been established as the language of our home.

Most Hasidic families in America (with the exception of Chabad), automatically speak Yiddish without thinking twice. According to the 2000 Census, 90 percent of families in Kiryas Yoel reported that they spoke Yiddish at home. However, I wasn’t born into a Hasidic family and my mother tongue is English. I didn’t speak Yiddish growing up, but learned it in college and graduate school, as a part of my concentration in Yiddish Studies. On my wedding day, my Yiddish was fairly academic and definitely not fluent.

My stepchildren were little angels and never made fun of my Yiddish. In fact, by speaking Yiddish to them, my command of the language became more and more fluent and “haimish,” until people no longer were able to tell that it wasn’t my native tongue. Not that I stopped speaking English. On the contrary, my husband’s English improved dramatically since our wedding day. But Yiddish was the official language of our home, and in time, even my stepchildren stopped using certain English words that are widespread in Hasidic Yiddish because my husband and I were careful to speak pure Yiddish.

Suddenly I noticed all sorts of English words creeping into his Yiddish. But I dug my heels in and corrected and corrected until the children learned that we speak Yiddish at home – and only Yiddish.

From time to time I noticed that my children spoke differently to me than to other children. Once, one of my children invited a friend over to play. Suddenly, he asked me for some orange juice, using the Yiddish phrase, “marantsn-zaft”. He then turned to his friend and asked him if he wanted “orange juice”.

Another time, my heart ached when I brought my youngest child to a very Hasidic playgroup and the teacher asked my son to take of his coat in the Hasidic Yiddish-English hybrid: “Ti os daan ‘coat’”, using the English word “coat” instead of the Yiddish word, “mantl”.

“Ti oys dayn MANTL sheyfele,” (“Take your coat off, sweetie”) I said a bit too loud, emphasizing the correct Yiddish word for coat. I explained to the teacher that we used the real Yiddish words for things at home and that if she used the English word for coat, my son might, heaven forbid, not understand.

I guess you could ask: Why was I so stubborn about speaking a “pure” Yiddish with my children? If I wanted them to speak a true Hasidic Yiddish, it has to include a plethora of English words. Maybe I was still under the influence of the Yiddishists who I befriended during graduate school? Maybe I still scorned those who wanted to take our beautiful language – the language which Yiddish activists had worked so hard to prove its pedigree and promote its high literature – and turn it into an actual jargon? It’s also possible that although I’m no linguist, I still clung to the belief that it was sacrilegious to depart from some sort of standard for a language. Or maybe I simply felt that the Yiddish language was being flooded with English words and expressions because Hasidic mothers today often speak better English than Yiddish. Probably it’s combination of all of the above, tinged with my own idealistic nature.

Recently, I started thinking about another language-related matter. When my oldest child was small, my non-Hasidic friends would ask me if I minded the fact that he probably wouldn’t go to college. I firmly answered: No.” I was insulted when I overheard my mother whisper to my sister: “If anything happens to me, make sure he (my son) goes to college.” I always said that if my children decided of their own volition to go to college, I would support them, but that I would never push them in that direction. I truly believed that it wasn’t hard to pass a GED if you studied by yourself, and I was theoretically ready to help them prepare for it if the occasion were to arise. Meanwhile, I ignored my mother’s hand-wringing over their “immigrant English.”

I don’t remember exactly when the “Aha moment” came. Probably, it was when my son was speaking English to someone who didn’t know Yiddish and his usage of a Yiddish syntax while speaking English suddenly grated on my ears: how he couldn’t translate simple idioms from Yiddish; and how his pronunciation really did sound like that of an “immigrant”. It dawned on me that my son who was born and raised in America would always be asked, “Where are you from?” It could be that my same desire for a pure Yiddish at that moment also meant a pure English. I didn’t want my kids to speak a broken Yiddish, or a broken English.

And so “English-Speaking Day” came into being. Every Sunday I speak only English to my children. The first time we celebrated English-Speaking Day, I was out with the kids on walk. The younger ones thought it was funny and tried to speak English back to me; but my oldest son got so upset he ran away and walked home by himself. Eventually, he became used to the concept, but he still answers me in Yiddish.

At the same time, I became somewhat dissatisfied with the way English was taught in the Hasidic boys’ schools. Although the school that my children attend has one of the better English departments, they just learn the English language and math, and will never study science, history or literature. (I was pleasantly surprised, though, when my son’s English teacher taught them about the national elections, about the Bill of Rights and even gave them a brief introduction to the civil rights movement.)

Another hurdle is that the school day is so packed with learning Torah that my ten-year-old son has almost no time during the week to play. He once mentioned that he would love to learn woodworking so I placed an ad in the local classifieds seeking a teacher. No one responded. I dreamed of sending him to a class in another neighborhood, but when would he have the time? He comes home at six PM and then sits and learns “voluntarily” for a program in which the children are rewarded for extra learning with a trip or ice cream, and then he still has his regular homework to do…

I don’t want to get into a lengthy discussion about the state of English studies in Hasidic schools, and I’m still not sure if I’m going to try to compensate with any sort of sustained Enrichment program. But I do know that if my son ever decides to take the GED and study study for some sort of degree, he will hopefully be able to do so as a native English speaker.

In the meantime, what are his plans for the future? His reply: he wants to own an aquarium supply store.