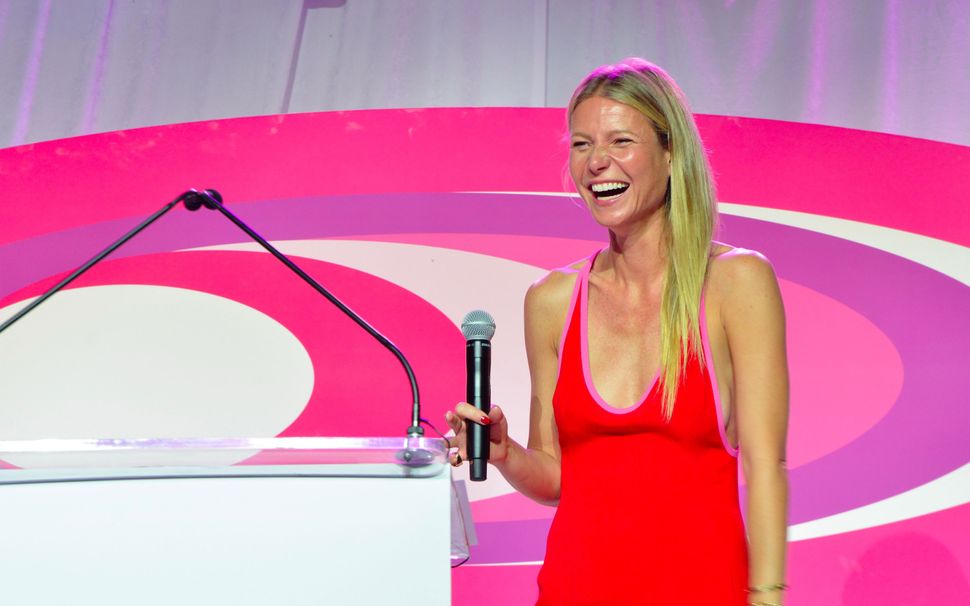 Of the “hundreds” who attended In Goop Health, a day-long Los Angeles event, there were – as Becky Scott points out – a not-insignificant number of lifestyle reporters. So much has been written about the event that it can feel like the attendees were all there to cover the event, until you take into account that a good amount of the coverage is aggregation from writers who’ve read so much about the event that they feel as if they’d been there. Alexandra Jacobs tracked down some “true believers,” so they’re out there. They form, in Paltrow’s own estimation “a sisterhood.”

I can’t promise that I’ve read, skimmed, or even clicked on all the various journalistic accounts of the summit. But one that stood out, among the ones I did read, was Lindy West’s, for the Guardian. West insists, early on in her piece, that her aim is not to make fun of people for enjoying the event: “I don’t believe that my proximity to crystals (or lack thereof) has any effect on my wellbeing, but I don’t think it is interesting or sophisticated to mock people who do.” There’s an undercurrent of sexism in the way women-oriented lifestyle actvities can get discussed, so this is a refreshing approach. That said, the event was plainly hilarious. West is a great writer, and manages to convey the event’s silliness without mean-spiritedness, as with the sentence, “Oh, my God, I realise. Paltrow is going to start selling her own poop.” She describes Paltrow as “glow[ing] like a radioactive swan.” That is, she restricts snark to Paltrow herself, and to things like the event having three price tiers.

West makes clear that her only issues with the event are substantive ones. She points out, for example, that attendees and speakers were almost all – as she is – white. (So am I, but I was not at Gwynethfest, and thus not contributing to its pallor.) While non-press attendees were presumably people who’d to pay a lot of money to see Gwyneth Paltrow, a group all but guaranteed to be white and female, a lack of panelist diversity is, yes, something theoretically avoidable. Writes West: “I wonder if anyone at Goop brought up the lack of diversity in their speakers during the planning stages, or anticipated this criticism.”

I can hear the collective voice of leftist Twitter: what could be more liberal in the pejorative sense than caring about panelist diversity at a thousand-dollar Gwyneth Paltrow snake-oil-promotion event? Or maybe it’s not leftist Twitter wondering this. Maybe I’m wondering this. But I see West’s point. The wellness industry, like any other sector, should have fair employment practices. If money’s being made – no matter how troubling the industry – it’s ugh if it’s just white people making it.

West’s overarching point about the event was that its purpose was, in effect, to teach a bunch of rich white women to feel “entitled.” While she notes that there’s a sexism at work in who’d even consider shelling out for an event of this nature (a decision perhaps motivated by fear “of losing your youth and beauty and the currency they confer”), the subtext here is, rich white women? Already entitled enough.

As with all discussions of insufficiently intersectional feminism (if indeed In Goop Health is feminism), there is a requisite interlude about whether women can Have It All. Wokeness-wise, West ranked this Ivanka-level, which seems about right:

For her keynote to close the day, Paltrow purports to dissect the complexities and woes of being a working mother with a panel of famous gal pals: Cameron Diaz, Tory Burch, Nicole Richie and Miranda Kerr. How do they do it? How do they have it all? The women deliver a bounty of platitudes about ambition, female friendship, self-care, their mothers and sticking to one’s “practice”. They are charming and humble. Richie is funny. But at no point do any of them say the words: “I HAVE LOTS AND LOTS OF MONEY AND A STAFF.” In the context of a conversation about the challenges facing working mothers, the omission is, frankly, bizarre.

West was not alone in noticing this. Discussing the same panel, in the New York Post, Maureen Callahan recalls “hear[ing] Paltrow and her peers gush over each other’s fabulousness, marvel at how each of them does it all (with no nods to nannies, personal assistants, household staff, managers and agents)[.]” Obliviousness grates, and this sounds like a textbook case.

But I’d assume it’s clear – even to someone who’d pay $1,000 to stand near Gwyneth Paltrow – that A-list celebrities are rich, and that with tremendous wealth comes all the help you could want. That panel sounds irritating, but it’s hard to make the case that the audience was being deceived. But that’s not quite what West is arguing. Her point is that Paltrow and the others needed to acknowledge the difference between their situation and that of most other women: “It is a basic responsibility of the privileged to refrain from taking credit for our own good fortune.”

A version of the panel with a privilege disclaimer tacked on would have been a notch less irritating, I suppose. Or it might have backfired for the panelists, serving only to highlight the privileged obliviousness of the entire enterprise. Is the problem Paltrow’s stance with respect to her privilege? Or is it a mix of the broader systems at work, and Paltrow’s own role in perpetuating a damaging concept of “wellness”? What if carefree cluelessness is the brand?