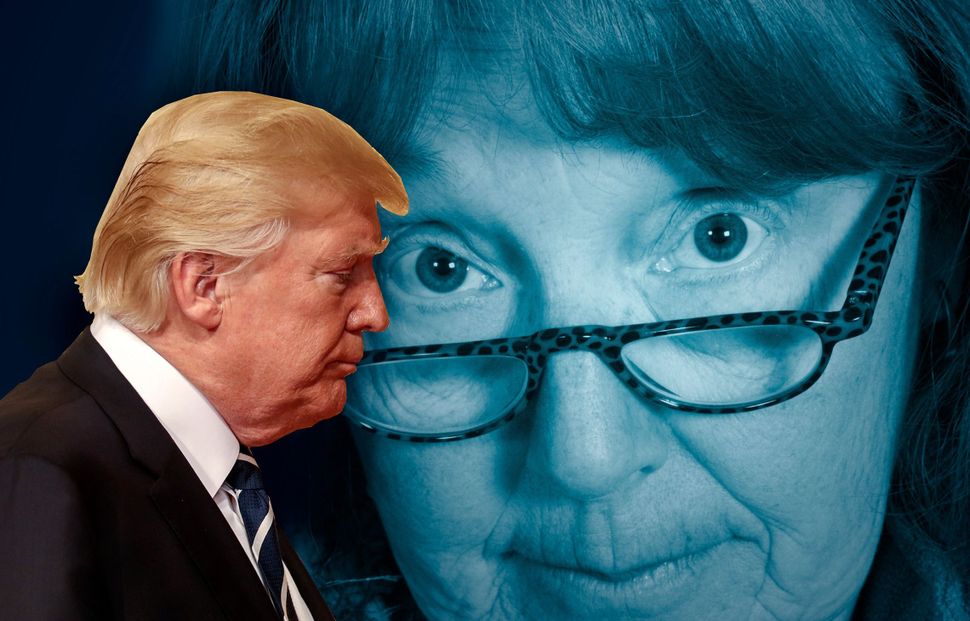 Frankly, bubele, you should be ashamed. For this we sent you to Wharton? To put wrestling videos on the Twitter? We both know you can do better. Your sister the judge wrote opinions, none of this tweeted narishkeyt (foolishness).

Honestly, sweetheart — you don’t look so good. What are you eating? You look a little bloated — maybe a water pill? Don’t you have a chef in that fancy schmancy White House kitchen? They can’t make you a salad once in a while? I’ll talk to them. You’re no spring chicken, Donald, even if you’ve got that (spit three times) Melania. Oy. A shande.

What was I saying? Oh — that you’re not getting any younger. And sometimes, when I read you on the Twitter, I wonder if you are getting a little meshugeneh. All I ever hear from you is Obama this, Obama that, lock her up and the emails over what’s her name, the wall, the wall, the wall, and now fake news? Well, I’ve got some real news for you, sweetheart — you need a little help. I didn’t teach you to blame everyone else for your problems — what is this meshugas? Oh, it’s his fault, it’s her fault, they’re picking on me, blah blah blah. There’s an old Yiddish proverb: The girl who can’t dance says the band can’t play.

Also, as bubbe used to say, a fish starts to stink from its head. I’m starting to smell it even here in Boca by the pool, so I’m packing it up and coming to Washington to help you out. And before you say no, I already talked to those Secret Service guards and they’re expecting me. What can I say, they like my rugelach. Your mama’s still got it.

Please, though, tell them I don’t like my code name and I want a new one. They couldn’t do better then “Yenta”? Maybe “MOTUS”?

A few things. That Jared? In charge of the Middle East? Hah. Put me in a room with Bibi and Abbas and I’ll work things out. You gotta handl a little, nudge a little, let them both think they’re getting what they want. There’s a Yiddish expression: What a fishing rod is to fish, flattery is to kings. Think about that, Mr. Art of the Deal.

And don’t worry, I’ll deal with North Korea. The zaftig shmendrik with the funny haircut needs to cut it out with the nuclear already. Genug is genug — enough is enough. It’s only funny until somebody gets hurt. I’ll talk to him. And I’ll go with you to meet Mr. Putin this time. Remember another proverb: Don’t sell the sun to buy a candle. Syria, Iran, China, the rest — you got some real problems here, boychick. It’s time to put down the golf clubs, buckle down and pay attention. No more Mar-a-Lago for a while. You want you should be in Florida? Then retire.

And remember this, Mr. Big Shot, with your name on the this and the that — you can catch more flies with honey than with vinegar. Stop with the mean and the yelling. You want those reporters should say nice things about you? Then be a mensch and stop tweeting face-lift this, blood coming out of whatever, grab them by the shmundie. You’re on your third wife — you don’t know how to talk to the ladies by now? When I come, I’ll bring videos of you when you were little, show them the cards you made me. I’ll kvell, we can schmaltz it up a little. But until I get there, give that Michael, the vice goy in chief, your phone. And get Bannon out of my wing — I don’t need to deal with that kind of dreck. I haven’t got the koyekh (strength).

What’s with the health care — I don’t understand. You want 22 million people shouldn’t have health insurance? People shouldn’t be able to see a doctor? If you had gone to medical school like I wanted you to, maybe you’d have a little rakhmones (compassion) but it’s too late for that. So I’ll talk to those 13 and see what we can do. You don’t have to give away the whole hospital, but bubkes? A little health care for everyone wouldn’t hurt.

And again, again with the taxes? What are they going to, take it with them? Better they give now, with warm hands. I have a lot more ideas for what we gotta do, but let’s talk when I get there. Oh, and don’t bother with the Air Force One — I can fly coach.

Judith Zirin is an attorney, freelance writer and Jewish mother of three.