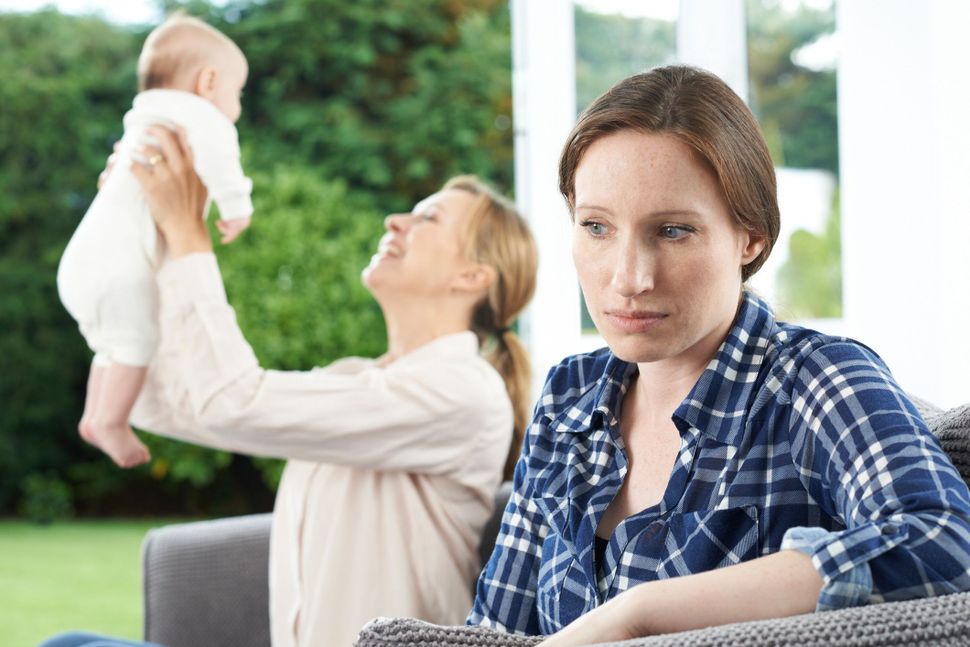 “I was so tired I just wanted to throttle her,” one mom said with a little laugh to show she wasn’t planning on harming her toddler. “And then when I finally went to the living room she’d spilled rice all over the floor!”

The moms at the party nodded in complicity, adding their own tales of woe: night terrors, bed-wetters, reluctant weaners, picky eaters. And of course, tiredness. Their own aching exhaustion — a state that no doubt fueled their complaints.

Gah! I wanted to throttle them.

“AT LEAST YOU HAVE A BABY!” I wanted to shout. “AT LEAST YOUR PREGNANCIES DIDN’T KEEP TERMINATING FOR NO REASON!” I would have added to their shocked, shamed faces. “WHO CARES IF YOU HAVE CHEERIOS EVERYWHERE?” I’d say, picking a piece out of the offending mom’s hair and storming off, never to have a friend again. Oh wait, before I slammed the door, I’d add, like the Jewish mother I was not: “YOU WANT SLEEP? TRY BEING CHILDLESS, YOU’LL GET SO MUCH SLEEP YOU’LL THINK YOU WERE IN YOUR GRAVE.”

Sure, I understood them. Having children is tiring. But not having them when you desperately want them is tiring, too. Especially when you’re hearing parents complain about them all the time.

I mark it as a sign of sanity — or divine providence — that I never said any of those awful things, not to them, anyway.

“If I ever have a baby, I will never complain,” I said to my husband, Solomon. “Ever. I don’t care how tired I am, how messy the house is, how little sex we are having. I will just. Be. Happy.”

It was an easy promise to make –- especially because it seemed like it would never come true: Over three years, I’d had four miscarriages, 10 doctors and seemed to have tried every treatment possible. So imagining what kind of wonderful mother I was going to be was just as pragmatic as picturing what kind of wonderful president I would be. In the words of the Magic 8 Ball -– which, bereft of a spiritual adviser, I turned to a lot in those days — “Outlook Not So Good.”

And so, in my fifth pregnancy, the one that survived past the dates previous ones hadn’t, I did not complain: not about my itchy skin, gargantuan ankles, or my addled, unfocused brain. How could I? You complain only about something you have, and despite said symptoms and my protruding belly, I did not feel secure that I was actually gestating a baby.

“You won’t be happy until you hold that baby in your arms,” said Dr. Braverman, a repeat miscarriage specialist who was so used to anxious pregnant women who experienced loss that he let me come for a checkup every week until my fifth month.

And I wasn’t. Happy, I mean. Until they took that baby out of my body and handed her to me.

“I feel amazing!” I told my best friend on day two in the hospital, wheeling the bassinet around and around the maternity ward to lull my daughter –- my daughter! — to sleep. My friend, a mother of two, was amazed that sounded so chipper. Maybe it was the Percoset, or the new hormones flooding in with my milk, or even the lack of all the chemicals I’d been administering for the past four years. Or simple because I’d finally become a mom.

I was still ecstatic those first few months. Yes, I was tired. Yes, breastfeeding was impossible. (Why didn’t anyone tell me?) Yes, I was frightened –- I even wanted to cover the baby in towels while I bathed her, lifting one tiny section at a time so that she wouldn’t get cold. (“We don’t live in the tundra,” Solomon said, refusing, bathing her like a normal baby.) Yes, I was drowning in stuff — baby presents and generous second-hand clothes friends and even some strangers sent me. No, I had no idea how to organize them: I had no nanny, baby-sitter or anyone except Solomon to help me out — which mostly meant passing me things while I nursed or pumped.

Still, I did not want to complain. I was so grateful for what was right there in front of me, this squirmy little girl with fierce brown eyes and dancing feet. How could anything be bad?

And yet the fact that “there are people starving in China” doesn’t make us less hungry.

Six months of sleep deprivation were taking their toll. Endless boob time –- my daughter refused the bottle –- was shackling me to the house. Her changing wardrobe –- time to pack up the newborn clothes! the 3-6 months clothes! –- was turning our house into a disaster zone. I was so, so hungry. And tired. And tired. And tired. And beginning to understand all those parents who complained.

I had what to complain about: I wanted to go back to freelance work, but couldn’t afford to hire help. I wanted to have more than two consecutive hours to think about my writing. I wanted Solomon to care about the baby’s schedule the way I did (a bit Gestapo-like, in retrospect). I wanted the baby to drink from a bottle. And I wanted just one full night of sleep.

But I felt guilty voicing these things aloud. All this –- work/life balance problems, identity problems, child-rearing problems –- were so cliché. Besides, wasn’t it everything I had railed against when I was childless? I’d promised myself I would be grateful. Every. Single. Moment.

Truthfully, all the hard things about being a new mom paled in comparison with my years of infertility and miscarriages. I intimated this at a baby shower for a friend –- one who’d suffered losses and did IVF. “You got this,” I told her. “The hardest part is over.”

“It’s just beginning!” a mother of teenagers told me. I didn’t have teenagers, only an infant, but I think the mom-to-be knew what I was getting at. When you don’t have a baby, you have sleepless nights and bad things happening to you in work and life, but no reward: no sweet-smelling doll with silky skin, no tiny fingers clutching your pinky for dear life, no synchronized breathing as you fall asleep together, no little private smiles that only the two of you understand.

Having a baby is easier than not having one.

And yet, can’t it be hard, too? Can’t diaper explosions in the middle of the market stink (literally) and baby using you as a human pacifier suck (literally) and being awakened at any noise in the night bite (not literally)?

When was I going to be allowed to be a “regular” mom -– to join those secret Facebook groups in which women griped about their bratty kids, clueless hubbies and unhelpful in-laws — to just rage against the machine? When was I going to allow myself to be that way?

The truth is, probably never.

The baby is a toddler now, and I must admit she has her challenging moments. “Do it myself, Mama!” she whines, ripping the Cheerios out of my hands. “No THANK YOU!” she screams, somehow missing the point of politeness and pushing another child out of the way. “I don’t like it!” she says, darting out of my reach so I can’t brush her hair, curls threatening to turn into dreadlocks.

I know I’m a “regular” mom now: I drink “Mommy Juice,” go on preschool tours and criticize my husband’s parenting style (probably less than he criticizes my cleaning style, which can be filed under I Don’t Do It). I look like every other mother, except I can’t completely forget my infertility. Even as it fades in the face of real life, I can’t help but remember how long and hard I tried to have a baby. How many I lost. And how many people there are out there who don’t have children because they can’t or because circumstances didn’t allow it.

Maybe it’s just another thing infertility has stolen from me -– the ability to take my child for granted.

And I wonder if that’s such a bad thing after all.

Amy Klein writes about health, fertility and parenting and is working on a memoir. Follow her on Twitter, @AmydKlein