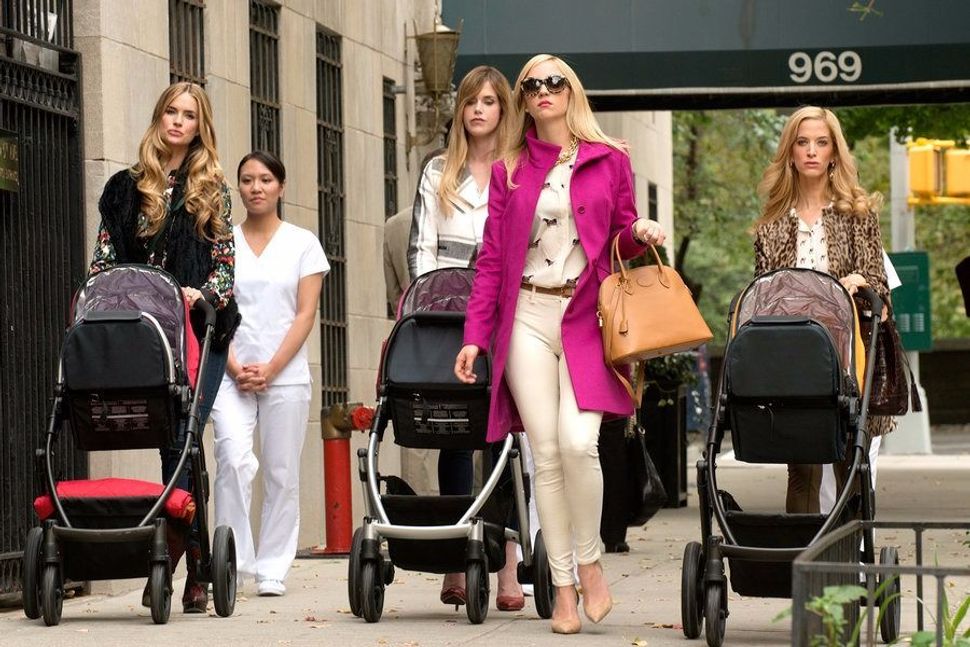 The topic of the Israeli-Palestinian conflict is stirring controversy in unusual quarters.

A Facebook group of moms on Manhattan’s Upper East Side that is known for tense exchanges (along with stroller recommendations, nanny discussions and million-dollar apartment advertisements) is teetering on the edge of dissolution with the publication of a children’s book. And according to anonymous group member sources, the moderators of UES Mommas (with over 27,000 members) are discussing closing the group due to the political tension that erupted as a result.

Last week, Golbarg Bashi, an Iranian-Swedish professor of Iranian studies at Rutgers University, took to the UES Mommas group to announce the launch of her book “P Is for Palestine.”

“How is there an alphabet book in a nonexistent Palestinian language?” one member asked. (The book is in English.)

“You should buy a plane ticket to Palestine then,” another snarked. “Let me know when you find one.”

Someone suggested that Bashi should have written about the Kurds instead.

And there was sheer racism: “Nothing more racist than Muslims!!!!!!!” Many members called for the post to be taken down.

Then the lightning rod that is the name of Linda Sarsour, the Brooklyn-based Palestinian-American activist, appeared. (Bashi had tagged Sarsour in one of her posts.)

“Linda Sarsour??? LOL d is for delusional I is for Israel s is for sue me….” And, in a fit of absurdity: “Linda Sarsour??!!!! Was Hitler not available to write a blurb?”

O for obsession, anyone?

There were some attempts at compassion: “Congratulations on your book and please know that many who love Israel also would celebrate your achievement, care about your safety and rights as an American and support you in this endeavor!”

Eventually, tired talking points emerged, like the possibly apocryphal quote attributed to Golda Meir: “Peace will come when the Arabs will love their children more than they hate us.”

According to the crowd-funding video for the book (a copy of the published version wasn’t available before this article was published), the author writes that “A is for Arabic, B is for Bethlehem, D is for ‘Dabkeh, a delightful dance.’ There’s also Gaza and Yallah and ‘Miftah, a key of return.’”

The word that landed with a thud in the mom’s group, though, was intifada. “I is for Intifada, Intifada is Arabic for rising up for what is right, if you are a kid or grownup!” the book says.

In response, some mommy group members shared memories of terror attacks in Israel.

As with many things related to Israel-Palestine, the answer is complicated. The first intifada (1987-1993) consisted largely of rocks, molotov cocktails, general strikes, tire burnings and graffiti. It wasn’t without bloodshed, though. Nearly 300 Israelis were killed, including 175 civilians. But Palestinians bore the brunt of the violence: Nearly 2,000 Palestinians were killed (with 359 of those being killed by other Palestinians).

As I have detailed in my book “The International Self: Psychoanalysis and the Search for Israeli-Palestinian Peace,” the first intifada showed Israelis that how the army suppressed the uprising challenged society’s values of fighting “wars of no alternative” and deploying only purity of arms. The intifada arguably humanized Palestinians in the eyes of Israelis and paved the way for the 1993 Oslo agreement.

During the final year of that uprising, I was attending the Hebrew University. To get downtown, we sometimes took the bus route that cut through East Jerusalem. One American friend from those days recalls rocks being thrown at her bus. “Were you scared?” I asked. “Kind of,” she said. “But mostly I felt like it was wrong to be driving through there when we could take a longer route and not flaunt our freedom.”

Fast-forward seven years, and the second intifada was much more violent. Frustrated by lack of progress in the 2000 Camp David talks between Yasser Arafat and Ehud Barak, followed by Ariel Sharon’s visit to the Temple Mount, Palestinians ramped up their use of force. One thousand Israelis and 3,000 Palestinians died during that four and a half year uprising.

So does “P Is for Palestine” celebrate violence? Possibly. But not necessarily. Resistance to the occupation involves a lot more than the use of force. And it surely involves much more than wanting to hurt Israelis out of a sense of hatred. There is, after all, personal and collective freedom at stake.

And if it does celebrate violence, even implicitly, and if we are going to censure a book for celebrating the intifada as child’s play, then we might want to rethink letting our own kids walk around in Israel Defense Forces T-shirts, a common fashion staple among young Diaspora Jews. I’m probably not the only teen of my generation who had gotten her hands on army-issued IDF surplus and wore it to Jewish summer camp, awash in a sense of tribal solidarity.

For every Diaspora Jew or Israeli frightened by the threat of Palestinian violence and the “intifada” word, there are many more Palestinians terrorized by those who wear the IDF uniform and order administrative detention and home demolitions and carry out night raids. And if violence is unacceptable, then there are other, more peaceful means to pursue resistance.

And last I checked, activists like Linda Sarsour are at the forefront of those efforts. So something tells me that this fight isn’t actually about violence after all, but about wanting those who are seeking their freedom to just go away.