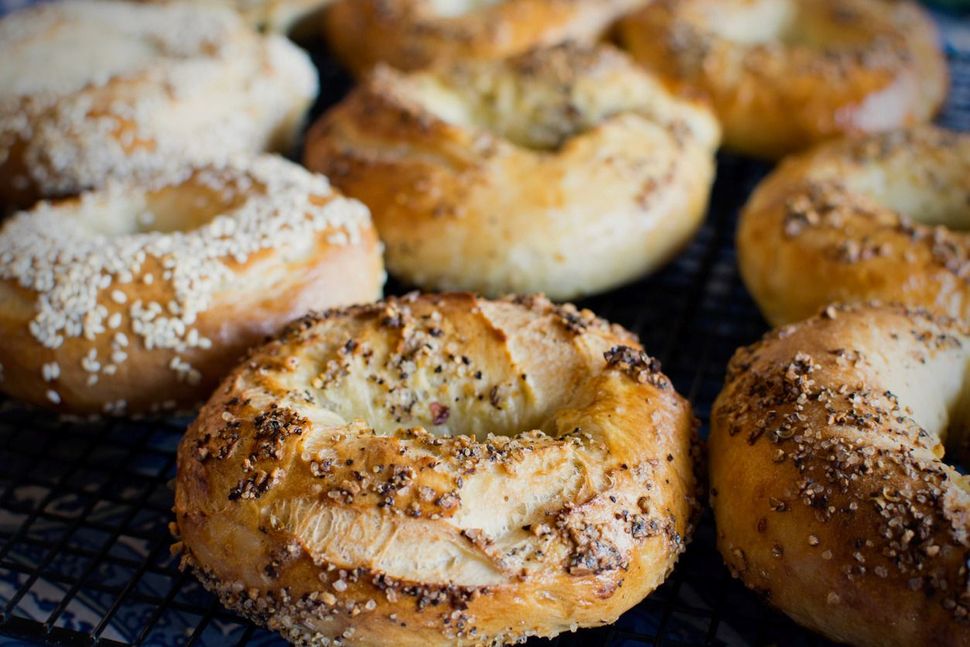 Perhaps because of their near-primal significance, throwing around phrases like “best bagel place” turns out to be a great way to start a fight. On Twitter, advocating unorthodox bagel slicing practices can render you an overnight pariah. If you admit to buying bagels at a chain, someone will immediately inform you that said chain has Nazi connections. And Americans who unironically refer themselves as “citizens of the world” may turn into unabashed xenophobes if told that it’s possible to get a decent bagel in Montreal.

This National Bagel Day, we want to usher in a new age of bagel détente. So instead of slamming down hot takes, we’re sharing the bagel places that have succored and sustained Forward staff, from our hometowns across the country to our current neighborhoods. We’re not telling you what to do, merely giving some friendly hints — much like Timothée Chalamet handing out Tompkins Square Bagels on the red carpet, but without those fabulous eyebrows.

Here’s what our staffers have to say.

Hot Bagels Abroad, Monclair, N.J.: “I have barely eaten a full bagel since 2011, but we live back to back with this little shop, and the boiled-then-baked smell every time I pull in the driveway gives me a bagel fix without the carbs. Also, I’m there around 6:30 a.m. most mornings getting a “plain, a little bit of butter” for my son’s lunchbox, and they ask every time if I want a receipt (no).”

O’Bagel, Montreal, Canada: “Best one I ever had (sorry to say) was at O’Bagel in the Jean Talon market.”

Monticello Bagel Bakery, Monticello, N.Y.: “This is my local Upstate New York joint, on East Broadway in the old capital town of the Borscht Belt, complete with drive-through window! Fresh and hot is how I like to have these, straight out of the bag they’re packed in—no cheese nor butter shmear necessary. And should you choose to hunker down and ‘eat in’ at this half-century old family owned joint, you will enjoy true archival bagel bakery atmosphere which is to say, a couple of tables, some chairs and an old rumpled up newspaper for company.”

Absolute Bagels, Upper West Side: “They have have the best texture — chewy on the inside, crusty on the outside and just the right size. Also, they carry egg bagels! Almost no one has those anymore.”

Beauty is in the eye of the bagel holder. ?: @mollytavoletti

Bagel Pub, Crown Heights: “Yes, they have the “hipster vibe” price markup but the fresh lox classic made with cucumber dill cream cheese on an everything bagel is a godsend on most Sunday mornings (or afternoons if we are being honest).”

Kehillath Israel, Brookline, Mass.: “The best bagel in America is served at around noon after Shabbat morning services at Kehillath Israel, a synagogue in Brookline, MA. The bagel itself is standard— soft on the inside, chewy on the outside, ideally eaten with a slab of cream cheese. But munch on the bagel while sitting around a table and catching up with the friendly group of 20-somethings that gathers there, feel the sun stream in and ignite the light wood paneled floor. Then, slip upstairs to the balcony of the sanctuary, good book in hand, and listen to the chatter downstairs fade into the rest of the day. You’ll never have a better bagel.”

Bagel Boys, Airmont, N.Y.: “Each year at the Yom Kippur break fast, we rely on my aunt and uncle to import our bagels from near their home in Suffern in Rockland County. Having come of age in something of a bagel desert, this is as close to a hometown carb ring as I have. (Pity me.) Still, for me they have that Proust’s madeleine quality, transporting me to hunger pang days of Yom Kippurs past. They keep pretty well in the freezer, too, and there are usually some stragglers in the fridge when I make a homecoming.”

H&H Bagels, Upper East Side: “Jaded New Yorkers like to say this legendary bagelry has declined in quality since the Koch administration. But should they ask me how they’re doing, I would answer: just fine. (Then again, I was born during the Dinkins years.) Still a good, dependable, if overly-dense and stuffed-to-excess bagel. The Sunday morning lines prove that there’s still something special about this place, where, in the ’80s, a worker once sagely refused to put tuna on my father’s cinnamon raisin bagel. Here’s a pro-tip: You can order pickup on Seamless and breeze by the queued-up yuppie masses. As that H&H employee said to my gobsmacked dad — after he selected a less exotic vehicle for his tuna fish — ‘excellent choice.’”

Leo’s Bagels, Financial Disrict: “I am not a huge bagel fan but, since I’ve been here my coworkers have introduced me to some very good bagels from Leo’s, not too far from the office. I’ve been there a few times and I think slowly but surely converting. My favorite bagel to get is an everything bagel toasted with plain cream cheese.”

(The erstwhile) Nagel’s Bagels, Crown Heights: “For a couple years the pleasure of my life was my Sunday pumpernickel everything with whitefish at Nagel’s Bagels on Lincoln road. Yes, the store was always weirdly filled with smoke; yes, the bagels were looked down on by certain Manhattanites. But they were just dense enough, with wonderful strong-but-not-tough crusts, and they were mine. Then Nagel’s closed with no warning — one weekend the grate stayed down over the store, and that was it. My neighborhood has low bagel density, so now I am forced to go to Bergen Bagel. It is smoke-free, but it will never have my heart.”

Knickerbocker Bagel, Bushwick: “I moved to Brooklyn two years ago this month, and that first weekend I eagerly scrolled Yelp for a true New York bagel shop. I found it around the corner from my empty apartment at Knickerbocker Bagel, and I was instantly hooked. I didn’t realize how deprived I was living in Florida, with its thin, crunchy bagels that weren’t ordered alone, but rather came as a side dish to an egg platter. At Knickerbocker Bagel, I learned what a bagel should be like: warm, with a fluffy center and perfectly browned crust. My first order, a sesame bagel lightly toasted — sorry! — with lox spread, became my staple. Expect a long line, but boy, it’s worth it. (I even wrote a little ode to it.)”

Too Jay’s, Fort Lauderdale, Fla.: “In Florida, bagels alone aren’t breakfast. They’re thin, crunchy and come in a plastic bin next to your eggs or pancakes (seriously), and you have to schmear it yourself. However, it’s what we know and we love it. But going to Too Jay’s was always a treat — their bagels beat all the other delis and diners in South Florida.”

H&H bagels, Upper East Side: “When my parents were dating, my father came into New York City from New Jersey every weekend and brought my mother bagels from H&H. I myself have never eaten an H&H bagel, but given how difficult it is these days to induce my father to come to New York (“the parking!”) they must be good.”

Brooklyn Bagel, East Village: “My ideal Saturday starts with a trip to Brooklyn Bagel on 8th Street and one of their everything bagels, toasted — at least twice! depending on how hot the bagel was to start with — and positively shmeared with dill pickle cream cheese.”

Rise Bagel Co, Minneapolis, Minn.: “I was born and raised in Minnesota, where Jewish appetizing culture is… lacking, compared to New York. (My mother has long fantasized about opening an appetizing shop called “The Hungry Jew.”) Recently, however, bagels have become a subject of culinary interest in the Twin Cities, and on a recent visit home my family and I engaged in a blind taste test of four bagel purveyors. The verdict: Rise, in Minneapolis. Though too small and not crusty enough for my taste, they had a strong yeasty flavor and a fluffy crumb with the right amount of chew.”

Tal Bagels, Upper East Side: “Everything is fresh and they have whole wheat flat bagels!”

Ize’s Deli & Bagelry, Rockville, Md.: “Located in a small, always packed shop on the Rockville Pike, Ize’s reminds me of New York when I’m back home. I know it’s truly the breakfast of champions because Maryland’s own Olympic star Katie Ledecky calls it one of her favorite places and the shop even has an omelet named after her.”

Bagels on the Square, Greenwich Village: “Bagels on the Square is not the best bagel in the village, or probably even within a flew blocks radius from NYU, but it is the best bagel in my heart. There’s something about the ridiculous number of bottled drink offerings and the sad, plastic wrapped muffins that is extremely comforting after submitting a twenty page sociology paper and running on nothing but Argo’s green tea. Get a bagel, sit in Father Demo Square, and watch all the West Village toddlers in strollers that cost more than your rent go by.”

If you’re up to it, why not make your own bagels following the recipe below (with English subtitles).