We asked an expert: conflict management for a summer without camp 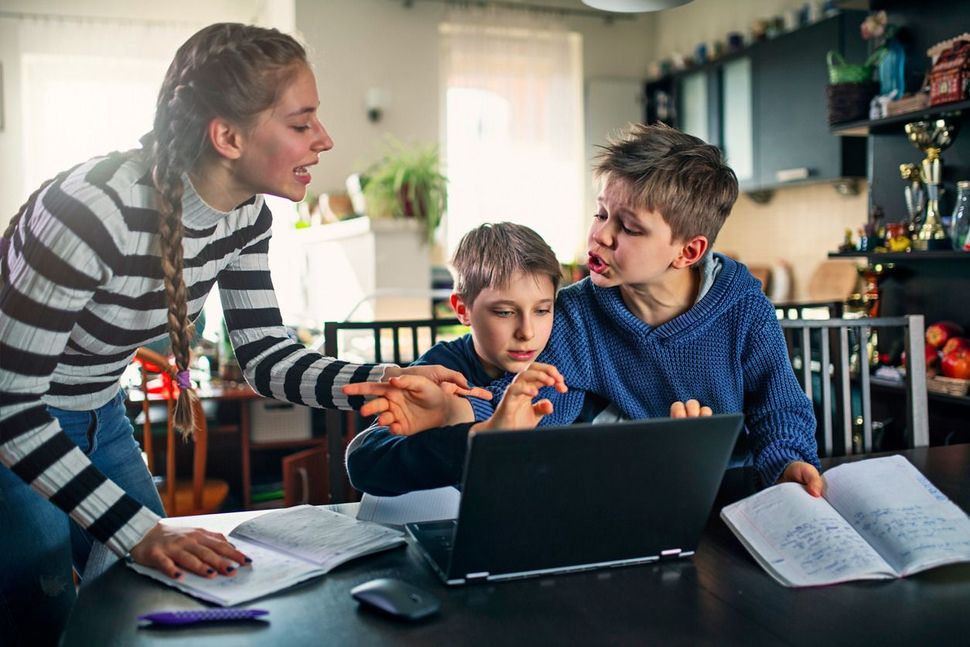 After months of sheltering in place, tempers are high in many a home. Image by iStock

Your kids are fighting over a toy. You know, the toy they’ve fought over every single day since shelter-in-place began. You’re worried that someone is going to end up with a bloody nose, and you’re also desperate for a few quiet moments to get some work done. You yell at them. They yell back. Soon everyone is in tears and, to alleviate your guilt, you start handing out cookies. Peace is restored — until tomorrow.

If that’s what your life looks like right now, you were probably hoping against hope that summer camp would give your kids a chance to get out of the house and give you a chance to relax and regroup. But with all summer camps operated by the Union for Reform Judaism cancelled, and other Jewish camps on the verge of similar decisions, parents are facing long summers acting as informal crisis mediators.

So what’s a conflict-weary parent to do? Sarina Natkin, LICSW, is a parenting coach who helps families talk their way out of patterns of argument. She’s also the parent of two kids who won’t be attending summer camp this year — so she knows the struggle is real. We asked for her best tips on keeping calm when camp is definitely not carrying on. Here’s what she had to say.

Remember that conflict is normal.

All kids fight with each other, Natkin said. It’s also healthy: by resolving their differences, kids learn skills like sharing that will stand them in good stead for the rest of their lives. Your job as a parent isn’t to resolve every fight. In fact, as much as possible, parents should help kids resolve conflict themselves — without “doing too much damage to the house, each other, or themselves,” Natkin said.

The best way to nip a conflict in the bud is to distance yourself from it, Natkin says. If your quarreling kids are about to make you explode, sit in another room for a few minutes. This is also a skill that kids can use. Tell them that if they’re feeling hurt or annoyed by a sibling, they can always choose to leave the room rather than initiating a fight.

The only catch? You have to practice what you preach with your partner, Natkin added. If they see you taking breaks to cool off when you have a disagreement, they’ll imitate you. If you routinely let arguments escalate into fights, they’ll do the same.

Carve out some private space — even if it’s all in your head.

With so many people working from home, there may not be a quiet room where you can go to cool down. So think creatively about what “private space” really means, Natkin said. For a kid, it could just be a corner where they can read when feeling stressed. For a parent, it could mean cultivating some mental distance. Even taking a couple minutes to play a game on your phone can get your mind engaged with something totally different than the situation around you. You don’t need to put a closed door between yourself and an argument, but you do need to keep yourself from dwelling on the snappy comebacks you wish you’d made in the heat of the moment.

“Generally my philosophy is that the more parents get in the middle, the more conflict will continue,” Natkins said. Kids are likely to view parental intervention, especially when it involves disciplining one party, as evidence of unfairness. Instead of coming down on one side or the other, ask your kids to talk through the problem and prompt them with some solutions. For example, if one sister snatched a toy because the other refused to share it, you can help them establish a schedule for the item in question.

Teach younger kids to use “I” statements to describe their feelings (“I felt hurt when you pulled my hair”) rather than you statements that blame their siblings (“You ruined my toy”). Establish “stop” as a firm code word that kids can use when the behavior of a sibling is annoying or hurting them. You can turn practice into a game by role-playing these behaviors with your partner — the sillier, the better. Older children may be less charmed by their parents acting out conflict resolution skills. If you have teens or tweens, Natkin suggests initiating a conversation during another activity, like taking a walk or kicking a ball.

Take care of yourself, and help kids to do the same.

Prescribing “self-care” often seems more like a judgment than a solution. But Natkin says that stewarding your mental health doesn’t have to be another chore. Instead of making intense exercise plans and failing to live up to them, aim for something achievable: a gentle walk or several short breaks during the workday. “It doesn’t sound as meaningful, but small breaks more frequently can be more helpful in taking care of ourselves,” Natkin said.

For kids, finding a way to help others can have positive effects on mental health — especially in the long term. “When we can make meaning out of a situation, we’re less likely to have post-traumatic stress issues” later, Natkin said. Kids don’t have to embark on major tzedakah projects; even calling a grandparent or sending a funny text can be energizing and empowering. Recently, Natkin and her daughter visited a friend’s house to sing “Happy Birthday” and hold up a sign outside her window. It was a simple gesture, Natkin said, but it made for one of her family’s calmest quarantine evenings.

Give kids independence — and responsibility.

“If you try to make a structure [for the summer] without consulting the kids, it’s not going to be successful,” Natkin said. Kids are more likely to be cooperative if they feel they have agency over their daily lives. But that doesn’t mean you have to let them watch TV all day long. “Ask what they want to do or want to learn,” Natkin suggested, and let them pursue it on their own as much as possible. Enthusiasm about a pet project is much more likely to keep a kid occupied than a top-down lesson plan imposed by parents.

Natkin added that quarantine is a great opportunity to build a habit of doing chores. Sharing out household tasks can take some pressure off harried parents, and teach kids practical skills like cooking, doing laundry, or even using a bank account. Most importantly, sharing the responsibility of keeping a household running will help kids feel like important members of a unit, rather than prisoners of coronavirus — or their parents.

We asked an expert: conflict management for a summer without camp