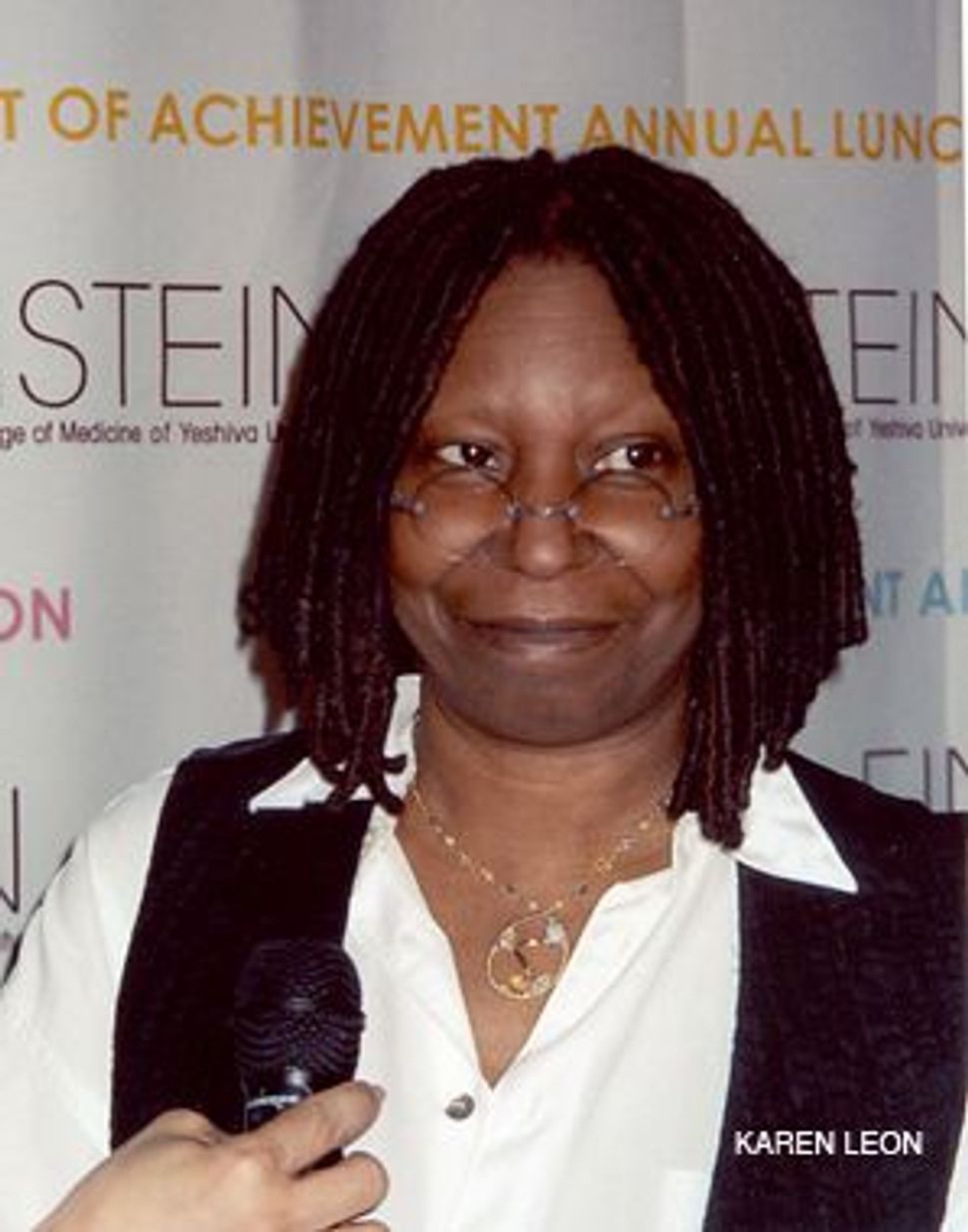 HER VIEW: Goldberg spoke at the event. 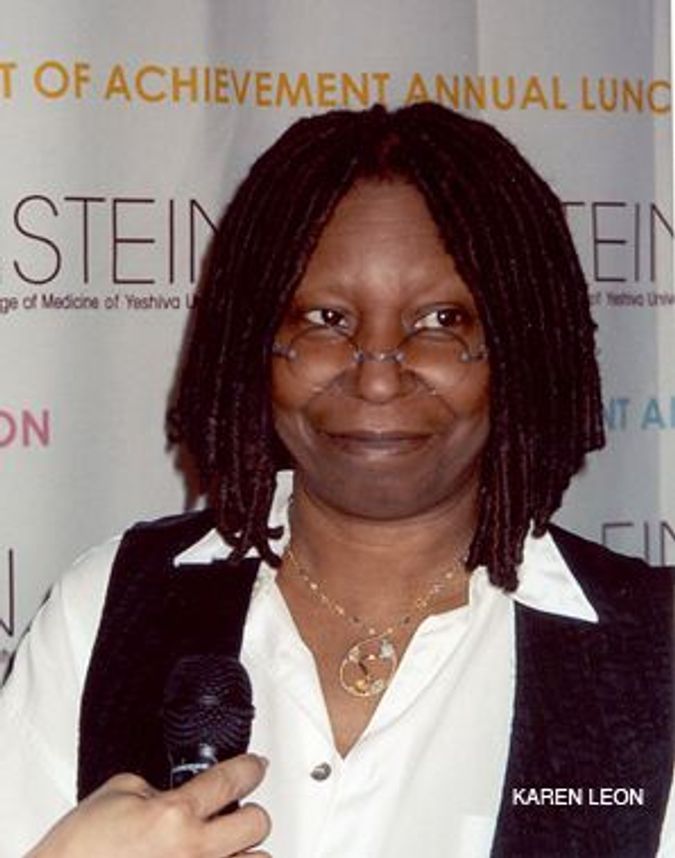 HER VIEW: Goldberg spoke at the event.

This is the last place I thought I would be… Thank you for shining a light on me,” said Whoopi Goldberg an honoree at the May 5 Albert Einstein College of Medicine’s 54th annual Spirit of Achievement Luncheon. Donny Deutsch, host of CNBC hit show “The Big Idea With Donny Deutsch,” noted that award-winning actor and author Goldberg, moderator of ABC’s talk show “The View,” was being honored for her humanitarian endeavors. In 2004, honoree Zaha Hadid was the first woman to receive the “Pritzker Prize — the Nobel Prize for architecture.” Her work was the subject of a critically acclaimed exhibition at New York’s Guggenheim Museum in 2006. When asked, “How did you get here?” Hadid said she replied “by plane,” aware that the real question was: “How did a girl from Baghdad get to be me?” Hadid explained: “I began in a nun’s school. The students were Muslim, Jewish, Christian; the head nun wanted us to achieve.” After their grandson was diagnosed with autism, in 2005, honoree Suzanne Wright co-founded Autism Speaks with her husband, Bob Wright, CEO of NBC Universal and vice chairman and chief executive officer of General Electric Co. To date, Autism Speaks has raised $100 million. “I never thought how this organization would define my life,” said Wright, who grew up in the Bronx and Queens. “One in 95 boys is born with autism. One half million will be diagnosed this year. I went to Israel, [where] one in 214 children is affected.”

Reflecting on the festive decor in the Hotel Pierre ballroom, honoree Pamela Fiori, editor-in-chief of Town & Country, joshed. This room setting is like spring on steroids.… For the past 40 years I have been a magazine editor, but it is not brain surgery.… We make judgments… separate the wheat from the chaff… bringing a magazine created in the 19th century into the 20th century. It’s about the good life, the pursuit of pleasure… and life’s pains. We did a feature on autism, a special sections on Alzheimer’s, depression. Even plastic surgery. Last summer, a section on grief garnered more responses than anything else.” Sydell Miller, recipient of the Lizette Sarnoff Award for Volunteer Service, recalled: “I was 20 years old when I met [my husband] Arnold. [He] did not want me to be a working wife; still I opened up a women’s boutique, ‘Tops and Bottoms.’ Twenty-five hundred women a week walked through the doors… I learned how to juggle my home, my business, my children and my husband…. In 1980 Arnie and I founded Matrix Essentials. We wanted to change the image of the entire beauty industry. At the time, there was not one woman salesman in the entire industry. Today over 50% are women.”

“It’s not enough to be the daughter of a famous father,” Deutsch said of honoree Dylan Lauren (daughter of Ralph Lauren [ne Lipschitz])  She took the candy story concept and turned it into a hot, sophisticated destination called Dylan’s Candy Bar. The March issue of Crain’s New York Business listed Lauren among its 2008 “40 under 40” honorees. Speakers and participants at this Albert Einstein National Women’s Division, New York Chapter luncheon included Allen Spiegel, dean of the Albert Einstein College of Medicine; Ruth Gottesman, chairperson of the college’s Board of Overseers, and luncheon chairs Judith Ripka Berk, Nancy Corzine and Andrea Stark.

BRONFMAN PRIZE HONORS RACHEL ANDRES ,WHO “WOULD NOT STAND IDLY BY”

The Bronfman mishpokhe was out in full force at the May 6 Charles Bronfman Prize ceremony, held at New York City’s Morgan Library & Museum. Prize recipient Rachel Andres, 45, led the team that launched the Solar Cooker Project of Jewish World Watch. The solar cookers allowed the women who fled to refugee camps in Chad to avoid going in search of firewood and putting themselves in danger of being raped. This award was created and endowed by Ellen Bronfman Hauptman, Andrew Hauptman, Stephen Bronfman and Claudine Blondin Bronfman, in honor of their father and father-in-law’s 70th birthday. It carries with it an award of $100,000. A visibly moved Charles Bronfman* told the gathering, “Nothing is more meaningful to a father than to see his children do what they do.” In his address, **Stephen Bronfman referred to “indifference as injustice’s incubator” — the very antithesis of what Andres said inspired her. “It was my Jewish upbringing and the Jewish imperative ‘Do not stand idly by’ that taught me to protect the vulnerable — Jews and non-Jews alike,” Andres said. “Just as I told my grandmother that I would bear witness and tell our family’s story, I promised the women of Iridimi that we would bear witness to the stories of the 4,669 families in the camp. Nobody was there to save my family, but I hope to play a role in protecting these families.” Andres and her team at JWW have raised more than $1 million in increments of $30 each! It’s enough to provide each family with two solar cookers (simple cardboard and aluminum foil contraptions).

Andres told the audience how her grandmother landed in Dallas after she fled from Suwalki, Poland, to avoid a loveless potential marriage “The rest of the family perished in the Holocaust, ” she said. Andres vowed to “bring the project to all the 12 refugee camps in Chad.” The success of her project has resulted in an 86% reduction in the rape or death of women going out to gather firewood. She cited some horror stories she had heard from survivors about women who had been run up in trees and burned to death, or girls raped till they died when they refused to reveal where their men were hiding. Among the evening’s speakers were Dan Meridor, Israel’s former minister of finance and justice, and Rosalie Silberman Abella, a justice on the Supreme Court of Canada (and the first Jewish judge appointed to Canada’s Supreme Court). The guests were treated to a heart-warming video “The Women of Iridimi” by Barbara Grover, then mingled, sipped and nibbled as the Gilead Hekselman Quartet provided background music.

There is still time to catch a few gems from the Film Society of Lincoln Center’s “Israel @60” Film Festival, which ends on June 5. For starters, four shtreymlakh for Gidi Dar’s brilliant thriller — yes thriller — “Ushpizin” (“The Guests”). And yes, shtreymlakh — the hats trimmed with fox fur that were worn by the Breslau/Bratslaver Hasids in the film — because to say “thumbs up” would be inappropriate inasmuch as an upward pointed thumb is often used to checkmate a hair-splitting talmudic argument. And, to my astonishment, I just learned that it was thumbs up — not down — that decided if the gladiator in the Coliseum lived or died. So shtreymlakh it is. “Ushpizin,” with its ultra-Orthodox baal tshuvah actors, and psychological, sexual and religious strands, will have you at the edge of your seat. At moments I thought that Dar must have had Sholom Aleichem’s Yiddish-speaking Tevye in mind when he cast Shuli Rand as Moshe Bellanga and his real-life wife, Michal Bat Sheva Rand, as his film wife, Malli Bellanga. They are a God-fearing, God-directed couple whose faith never wavers. As for the guests who invade their lives, there were scenes during which a whiff of the Fox TV show “Prison Break” invaded the film’s Hasidic enclave.

In Joseph Cedar’s “Campfire,” a charmer set in 1981, Rachel, a young widow, is at odds with her two teenage daughters — one involved with a soldier, the other on the cusp of sexual awakening. She decides to join a new community on the West Bank and is badly set up by a busybody neighbor. She eventually finds love where she least expects it. Moshe  Ivgy, a star in whatever Israeli movie he’s in, gives a performance that will leave you farklempt yet happy. The film also touches on the Sephardic-Ashkenazic chasm among both adults and teenagers, and frankly addresses Israeli sexism and the trauma of sexual harassment.

Amos Gitai’s “Disengagement” seems to be two disparate films at odds with the whole. In the first meandering half, Ana, played by Juliette Binoche, is an out-of-touch, distracted woman living in France in what may be end-of-the-money-line lavish splendor. Her father lies dead on a plank. Next to him, an attractive middle-aged African woman dressed in Indian garb is intoning, in beautifully articulated German, a funereal lied. What does this mean? Suddenly there is a will. French icon Jeanne Moreau portrays a lawyer who informs Ana and her just materialized half-brother, Uli (hello!) that the will leaves everything to her daughter, Dana, whom she had given up at birth and is now on a kibbutz in Gaza. Who was Dana’s father? Why did Ana give up Dana? Was she too young for motherhood? Was the birth the result of a rape? Ver veys? Ana and her half-brother travel to the kibbutz to find Dana and arrive just as the kibbutz is being dismantled and the settlers told to leave what had been home for decades. Ana still seems to be in some kind of daze. Her reunion with her daughter resembles neither detachment nor emotional drama, nor is there an explanation for the mother-child break. Based on the violent film clips of Gaza kibbutz/settlement “disengagements,” the forcible removal re-creations are so politically correct as to blunt one’s anger at the blue-shirted uniformed police who appear unrealistically restrained in enforcing their orders. And with few exceptions, there is little sympathetic angst for the settlers who, urged by their ineffective rabbi, seem almost fatalistic about having to leave their gan eiden. All I could think of was where are these settlers going to be resettled next?