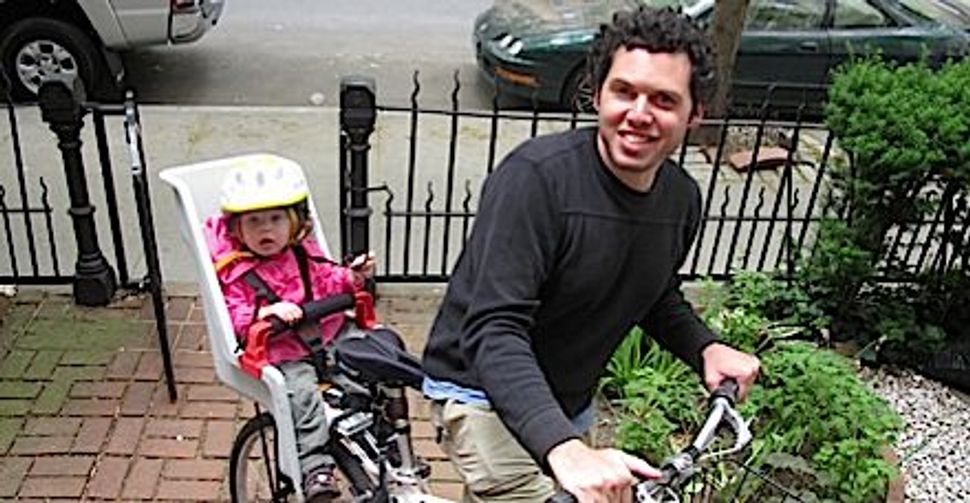 Image by Courtesy of Gal Beckerman

Being a dad, and especially a Jewish dad, is a role that has evolved mightily since Abraham, the first father, raised a blade to slaughter his son, Isaac.

Fathers have long been God-fearing, law-abiding men, strict disciplinarians of their children. Today’s dads take on additional responsibilities and challenges. They perch at the kitchen table to help with schoolwork, hang out at the baseball diamond to coach Little League and sit behind the wheel or in the passenger seat to give patient driving instructions. They turn a baby’s tears into laughter. At 3 a.m., they change diapers. Sometimes, it falls to fathers to make the tough decisions that affect the welfare of the entire family.

Through their acts of kindness, wisdom and understanding, fathers shape the personalities and futures of their sons and daughters.

Is This Itch God?

Father’s Day is even more of a hallmark festival than Mother’s Day. Arriving at the Sunday in question doesn’t so much oblige children to bring gifts as oblige fathers and children to step back and say: Whoa, we’re in this relationship. Who’d’a’thunk it?

Before I was a father, I’d never have expected that I would be so infatuated with a small pot-bellied human who was not able to walk or talk or eat solid food.

Before I was a father, I’d never have thought that I could take such an interest, nay pride, in another person’s poop — its regularity, consistency and color.

Before I was a father, I had whole prairies of time to wander around slowly and achieve professional and personal tasks. Now my time is a narrow alley between my employer’s office building and the growing kingdom of my daughters’ needs.

Before I was a father, I was barely able to put an elastic band around a plastic container of leftovers, let alone brush curly hair into a ponytail affixed with a purple hair band.

Before I was a father of an inquisitive daughter, I had allowed my own curiosity to fade and let the world become a blurry place. Now it’s: How does a duck chew? What’s a hammock? If God is everywhere, then is this french fry God? Is this itch God?

Becoming a father has moved me out of the center of my own universe. And it’s nice to have a day a year set aside to remember why.

Of Bosses and Bikes

This Father’s Day, I’ll take my daughter, Mika, for a bike ride. She’s a year and a half old, and already has her own set of distinct desires, which include being on the back of a bike. (Though, if she had it her way, she’d probably be commandeering her own.)

My wife and I attached a bicycle seat for her as soon as the weather got warm, and she insisted on choosing her own helmet — the yellow one with “quack quacks.” There’s nothing like having a person you just saw burst into the world bossing you around.

The bike riding has been special for me, too. Because strapping her into the seat, putting on her helmet and riding around the park was really the first moment that I was doing something as a father that I had imagined doing, long before I had Mika. My experiences with her to this point have been a string of constant surprises. Could I have ever known what it would be like to get that little sleep? To be so obsessed with the well-being of another person? To find joy in the way she says the word “poop”? No, no and no.

And yet there is something about the bike riding that feels familiar. Maybe it’s the mix of adventure and security that I remember feeling as a boy with my own father. I know she’s back there, exhilarated at moving faster than she ever has, and yet able to see me in front of her the whole time, knowing I’m not going anywhere. That’s what I’d always imagined a father was — someone who launches you out into the world but who never lets you get too far out of his sight.

It’s a rational move, the product of a long and difficult process of evaluation — both of the school to which he is going and his situation here at home. After several years of struggle, we have concluded that this school, with its intense therapeutic environment, can do more for him than his parents can.

That is a hard conclusion to reach. And my feelings this Father’s Day are guilt about being a bad parent; exhilaration at the prospect of being liberated from the extraordinary and unrelenting burden of caring for a 9-year-old who must be watched and followed every second, lest he harm himself or others; even worse guilt about those feelings of anticipation; hope that his departure will enable us to care better for his two sisters, each of whom has significant — though less debilitating — disabilities of her own; concern about the impact his departure will have on his sisters, and guilt, again, about that playing a role in my feelings.

None of this changes my rational conclusion that this is the best thing we can do for Eli, and for us. But this Father’s Day, those are my feelings.