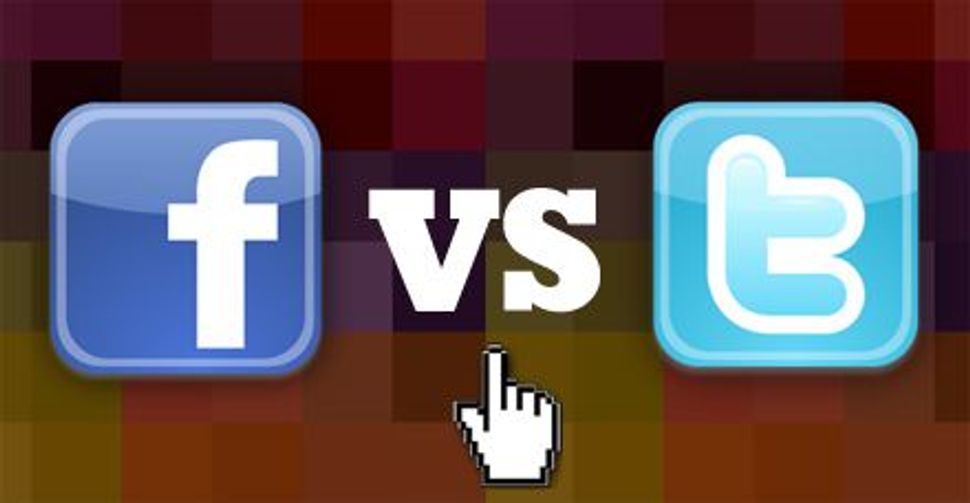 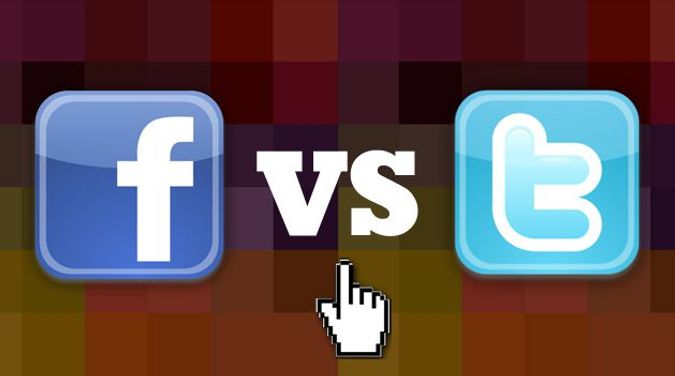 Social Concerns: Facebook and Twitter have very different approaches when it comes to dealing with claims of anti-Semitic or hate speech. Image by nate lavey

Ask Abraham Cooper of the Simon Wiesenthal Center how he grades Twitter’s efforts to combat anti-Semitic hate speech, and Cooper, the group’s associate dean, won’t even give Twitter an F.

“They haven’t even shown up to the dance yet,” said Cooper, who directs the center’s anti-hate speech efforts.

Facebook, on the other hand, has recently won plaudits from Jewish groups, such as the Anti-Defamation League, for its willingness to censor perceived anti-Semitic hate speech and even some anti-Israel Facebook pages.

The distinct responses from Twitter and Facebook have been no different when Muslims have protested content that they deemed anti-Islamic. Pakistan, for example, recently demanded that Twitter remove alleged anti-Islamic content from its platform, but officials at the mirco-blogging medium refused, leading the government to briefly block access to it for the whole country.

But in 2010, when faced with the same demand from Pakistan that Twitter defied in 2012, Facebook quickly complied.

In the hot, rapidly evolving debate on new social media and the boundaries of free speech, the dichotomy between Twitter and Facebook tells more than just a digital tale of two cities; the response to their divergent stances also sometimes illustrates a maxim as old as the two media are new: It depends on whose ox is being gored.

The two huge media companies’ respective postures were on sharp display in a recent pact signed between the Inter-parliamentary Coalition for Combating Antisemitism and by Internet giants Google and Facebook. The agreement, reached on May 7, declares that both sides will work together to “build best practices for understanding, reporting upon and responding to Internet hate.”

But Twitter was notably absent from the agreement. The company has consistently rejected attempts to intervene with its content, citing its concern for maintaining free speech.

“Facebook has been very responsive, cooperative and committed to fighting Internet hate,” said Deborah Lauter, director of civil rights at the Anti-Defamation League, a group that has played a key role in reaching understandings with social media providers. Twitter, Lauter admitted, has been slower to respond to requests for removing hate speech and offensive Tweets. “But as Twitter grows, they’ll have to go through this stage and understand this is a problem that needs to be solved,” she said.

This divide does not come as a surprise to those who have been following the two companies on issues related to real or perceived encroachment on their users’ freedom to share any content through a social media platform. Twitter, self-described by its leaders as “the free speech wing of the free speech party,” has largely resisted lending itself to restrictions on content by either governments or citizen groups. It has, for example, in the absence of court orders of warrants, fought government demands for records of its users in criminal and terror-related investigations — even as Secretary of State Hillary Clinton has praised it and other digital media for resisting encroachments by authoritarian governments abroad.

Facebook has taken a diametrically opposite approach. Critics of the social network have listed many instances in which the company, which recently went public, has quickly cooperated with American and foreign governments seeking to limit content or to obtain users’ information.

The company has also been attentive to complaints – if there are enough of them – from individual users concerned about offensive content. It was this type of citizen activism that recently led Facebook to block a posting by an Israeli cartoonist depicting the Jewish state as a giant who still believes he is the iconic Jewish boy raising his hands in fear in face of the Nazi soldiers. This type of censorship does not seem to have a clear political color; Facebook has also removed content following complaints from users aligned with the Israeli left, such as a recent post seen as inciting against African asylum seekers in Israel.

Facebook played host for several meetings leading to the establishment of an Anti-Cyberhate Working Group by the Inter-parliamentary Coalition for Combating Antisemitism, a nongovernmental organization composed of interested parliamentarians from around the world. Google joined Facebook as the other major participant in the newly established task force, a product of the coalition’s May 7 agreement.

“We welcome the commitments of Google and Facebook to participate in this dialogue to combat online hate speech, Holocaust denial and anti-Semitism,” ADL’s national director, Abraham Foxman, said in a statement. “Working alongside the Internet’s leaders will allow for the development of industry standards that balance effectiveness with respect for the right to free speech.”

Jewish and pro-Israeli activists have been monitoring posts on Facebook ever since it gained prominence as the leading vehicle for internet-based social engagement. An early test in March 2011 made clear that the social network is open to dialogue with those seeking to rein in speech they view as extremist.

An Arabic page put up then called for a “third Palestinian intifada,” and included content posted by the page’s administrators quoting a hadith, or saying of the Prophet, that has been appropriated by radical groups: “The hour [of redemption] does not come until the Muslims fight the Jews and even the stones and trees say, ‘O Muslim, a Jew is behind me, so kill him.’”

The Arabic language Facebook page attracted more than 330,000 fans, according to the Jerusalem Post, and called for a mass march into Israel from neighboring countries. The call appeared to echo the Arab Spring uprisings in Egypt and Tunisia taking place at the time. But a number of messages posted by fans contained both implicit and explicit violent content, according to a translation of the site quoted by the Post.

The content led Israeli Minister of Information and Diaspora Yuli Edelstein to send a letter to Mark Zuckerberg, Facebook’s founder and CEO, asking him to remove the page. Jewish groups also marshaled a mass pressure campaign for the page’s removal. After initially resisting, Facebook complied. Andrew Noyes, a Facebook spokesman said the page was removed because it contained “direct calls for violence or expressions of hate.”

“They lagged on that one a bit, but when they saw the reactions, they removed it,” Lauter said.

She added that despite Facebook’s understanding of Jewish groups’ concerns, the social media site is still slow in responding to requests to remove pages when it comes to Holocaust deniers.

Facebook, which has more than 800 million users worldwide, has shown its willingness to address concerns of other interest groups and of governments, as well. Its public guidelines specifically allow the social network to provide government and law enforcement agencies with information on its users as it determines necessary, even in the absence of a court order.

“They want to get into the Chinese market,” York said. “That is why Facebook is careful not to identify itself with the Arab Spring or any other kind of activism.”

The run-ins with authorities in Pakistan made the differences in approach between Facebook and Twitter crystal clear.

On May 20, Pakistani regulators shut down Twitter for eight hours after it refused to remove content promoting the third annual Everybody Draw Mohammed Day. The event was created in 2010 as a campaign supporting free speech after Muslims in some countries violently protested offending visual depictions of Islam’s founder. The Pakistani government asked Twitter to block all content advocating participation in the event, but Twitter turned it down, provoking Pakistan’s censorship. Despite this, at the end of the day, it was the Pakistani authorities that backed off and removed their block on accessing Twitter from within the country.

When Pakistan made the same demand of Facebook in 2010, Facebook agreed to take down the page promoting the event.

The contrasting responses highlight the fact that neither of the social media platforms seems to base its decisions on the religion of those offended. Their respective stances reflect broader social and economic outlooks.

Twitter has made its resistance against requests to provide information to government and police investigations part of its brand.

Under the 2002 USA Patriot Act, the government can issue secret requests, known as national security letters, demanding Internet carriers and social media platforms to provide information on users without a court order and without informing users that their personal information was shared with the government. Some 50,000 national security letters are issued annually and most go unknown. Twitter has been the only large provider to challenge the requests, demanding it be allowed to notify users when handing over their information to the government.

In recent months, Twitter has been battling in courts against an attempt by the Manhattan district attorney’s office to have the company provide three months of records on Malcolm Harris, a user who was active in the Occupy Wall Street demonstrations.

The American Civil Liberties Union took on the case, stating that “Twitter should be applauded,” for rejecting government attempts to reach its users’ records.

But what wins applause from some is problematic for others. In their efforts to get Twitter to respond to their concerns, Jewish activists invoke the concept of “corporate responsibility.” It’s a voluntary standard, but one that is expected from large Internet and social media providers, and would rein in content deemed hateful on their platforms.

“Right now we are talking about conversations and work groups,” Lauter said when describing the tools used to convince companies like Twitter to take action. But other forms of pressure exist, including shareholder activity for publicly traded companies.

Jewish advocacy groups stress that limiting perceived hate on Facebook and Twitter is not a First Amendment issue, since there is no government intervention blocking free speech. But, at the EFF, York fears overuse of pressure. “My concern is that if they respond to the ADL, other groups will ask for other limitations,” she warned. “It is a slippery slope.”