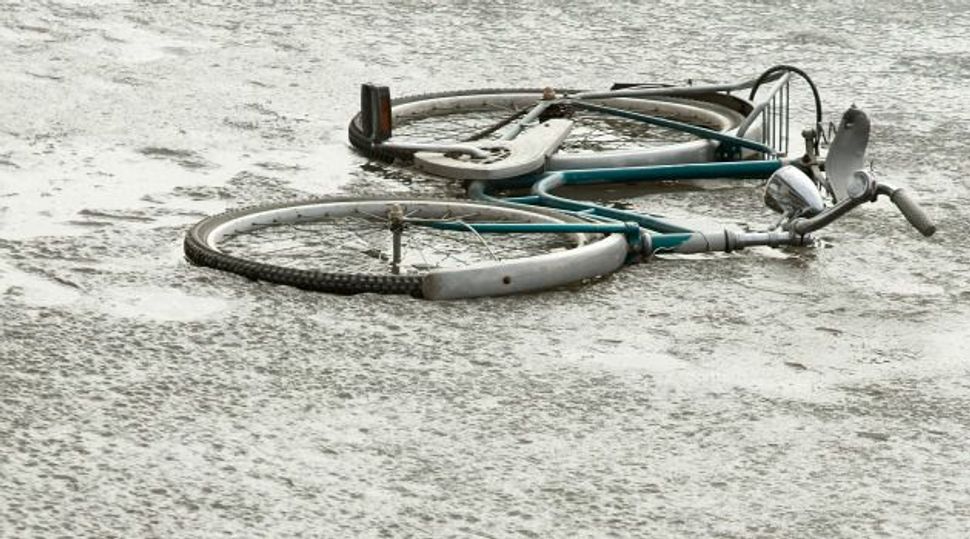 Aaron walked into our lives on the day of my next-to-youngest son’s bar mitzvah. The services and the Kiddush reception were over; I was cleaning up, shoving plates of half-eaten cakes I’d baked myself into garbage bags, when he turned up on the arm of Shimon, one of our guests. “We can’t have Aaron for lunch. Maybe you could,” Shimon said.

“Sure,” I answered. I’d never hosted Aaron before, but it felt right. Hosting guests, especially challenging ones, was an old Jewish tradition and a mitzvah. Lots of my neighbors did it all the time: Shimon, of course, and also Jenny, who served meals to Eda, a chronically depressed woman who didn’t seem to bathe. At least Aaron was nattily dressed and clean.

I didn’t know Aaron, but I’d seen him and I knew his story. It was every parent’s worst nightmare. Thirty years ago, Aaron was born healthy. At age 3 he grew a brain tumor. The doctor removed it and saved his life, but after that he was different, out of sync. He never married, never had children, never held a paying job. He lived at home like a child, which in some ways he was.

The Jewish mystics say that people like Aaron are elevated souls, too holy for our grim and dirty world. With Aaron the holiness was evident. As soon as he sat down at our table, he began to sing, in his rich baritone voice, not pop songs or hip-hop, but the Sabbath zmiros, the exquisite Sabbath-table hymns of praise, penned by the Jewish poets of medieval Spain.

I loved the zmiros, but my family didn’t always sing them. That week, however, the bar mitzvah Sabbath, I wanted everyone around the table to sing con brio. Now, Aaron had arrived to answer my prayers. When he sang, everyone joined him. How could we not?

Aaron brought us another gift, too. As the 10th man at the table — in Jewish law, Aaron is a man — we were able to recite a special version of the bentshing, the grace after meals.

After that, Aaron became our guest. He never called or emailed or texted to announce his arrival. Nor did we contact him. He just came.

Sometimes he brought news — not current events or celebrity gossip or even sports scores. Aaron never watched TV, never listened to the radio, never surfed the Internet. Aaron’s big news was that he received a new keychain for his collection: He wore at least two dozen, some with Magen Davids, others with menorahs or mezuzahs attached. They dangled from his belt like a huge ball.

Another “news” item was a d’var Torah. Aaron’s divrei Torah were the kinds of things that kids learn in kindergarten, but when he repeated them his light-blue eyes shone like pale sapphires, and his sallow face lit up with a broad grin.

But on other days, Aaron’s eyes clouded and his lips sunk down like the sad clown Pierrot. On those days Aaron was hurting — sometimes physically, but more often emotionally. His delicate feelings had been trampled on, and he needed the catharsis of “telling.”

Telling wasn’t easy. Aaron searched for words and struggled to string them into sentences, as I lost patience. Asking him to hurry up didn’t help. “Please,” he’d beg, “it will only take a little bit of time. I need to say this.” So I’d bite down on the inside of my mouth to suppress a yawn.

Some of my kids would flee to their rooms whenever he turned up. Amazingly, though, my youngest child, 11-year-old Yanky, had preternatural patience for him, and Aaron sensed this. He sought out Yanky. Often he brought a game — checkers or Connect Four — for them to play.

I kept my eye on them. Since I’d heard so many stories, my hypervigilance was almost reflexive. Thank God, though, nothing ever happened — not that I really was expecting it to. Aaron wasn’t a pervert or a pedophile, he was just a lonely boy trapped in the body of a man. Still I wondered whether I was doing the right thing by letting him hang around the house.

Sometimes I questioned whether my hospitality did him any good. Aaron took a lot of my time, and on many days he seemed to leave our house sadder than he had been when he had entered.

Then my family had its own worst nightmare. Yanky was out on his bike. As he was riding, a driver of a parked minivan flung open his door. Yanky’s head collided with the door. Because of the impact, Yanky flew into the middle of the street, where he landed, bleeding and nearly unconscious. An ambulance took him to the hospital.

Those first few days, we watched as Yanky lay asleep in his hospital bed. The doctors didn’t call it a coma, but Yanky was gone and we couldn’t seem to get him back. Nothing roused him — not our hugs and kisses, not even the sound of his own name. The nurses poked and prodded long and hard just to get his eyes to flash open for a second, and I felt a fear that seemed to leech out from the marrow of my bones. Would my baby ever come back? Eventually, Yanky did return, cranky and crying but very clearly alive. It took many weeks for his old self to come back.

As we waited, my family seemed to fold into itself. Our days were spent shuttling back and forth to the hospital and then later between the rehabilitation facility and our home. We had no guests. We had no time even to think of guests. Though we never told him not to visit us anymore, Aaron stopped coming over.

Thank God, Yanky did recover. The neurosurgeons said that it was because he had been wearing a bicycle helmet when he crashed. While that was true, I had another explanation. It was something I’d figured out on my own, but I never shared it with anyone until I met Aaron’s mother on the street one day.

She’d heard about the accident. She told me that she had been praying hard for Yanky. Then she hugged me. Though we didn’t know each other well, her hug felt natural and good.

“You know about Aaron’s special friendship with Yanky. I don’t think it’s a coincidence — what happened and how things turned out, I mean,” I told her.

“Yes I thought that, too,” she said, and she hugged me again.

To a believer, nothing is random. Life is a puzzle. lf you look closely enough, you see how the pieces connect.

Yanky is back at school now and almost completely better, and Aaron is back in our lives.

These days, when he comes over I try harder to listen. In some way I feel I owe him something. Maybe each time I force myself to stay awake through his long stories or fix his tea the way he likes it (“two little spoons of sugars and milk, please remove the teabag”), I’m paying back a cosmic debt. I don’t know for sure; God’s account books aren’t open for us to inspect. But there’s never any harm in doing a mitzvah.

Carol Ungar is a writer and food blogger. She is at work on the forthcoming cookbook “Jewish Soul Food” from Brandeis University Press. Read her work at kosherhomecooking.