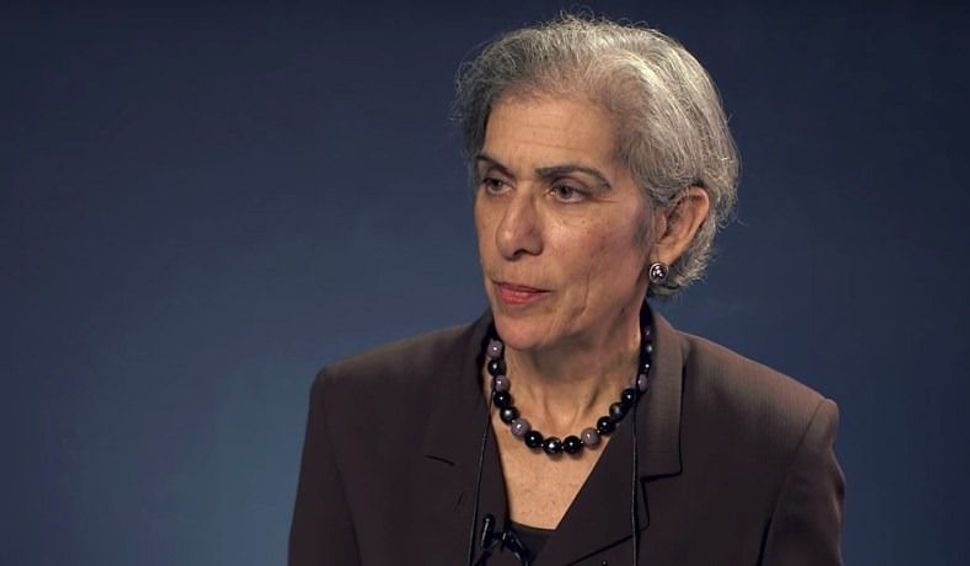 The latest battle in the “free speech wars” on college campuses took place at the University of Pennsylvania this month, where a professor known for her controversial views on affirmative action was removed from her position teaching mandatory first-year classes.

Amy Wax, a tenured professor at the University of Pennsylvania Law School, had made disparaging remarks about the school’s black students and suggested that some of them should not be at the school. After the video of her remarks came to light earlier this month, the school announced that she was barred from teaching first-year students and would only teach her specific areas of expertise – but would also maintain her tenure, salary and seniority.

Her case raises questions over whether colleges will allow professors, students and speakers to express controversial or even offensive views.

“I regret that I created a firestorm, I regret that certain people were upset by what I said,” Wax said in a public video chat after the furor arose. “Although I think it’s part of the problem that people are very thin-skinned these days.”

“Here’s a very inconvenient fact, Glenn: I don’t think I’ve ever seen a black student graduate in the top quarter of the class, and rarely, rarely, in the top half,” she said. “I can think of one or two students who scored in the first half of my required first-year Civil Procedure course.”

She went on to say that the prestigious and exclusive Penn Law Review had a “diversity mandate,” and that some black students face an “uphill battle” because they aren’t properly matched to the high-level school. “We’re not saying they shouldn’t go to college – we’re not saying that,” she said. “I mean, some of them shouldn’t.”

After the video came to light in early March, African-American students organized a petition asking Penn to “explicitly dispel the lies” and remove her from teaching first-year students.

In response, Law School dean Theodore Ruger sent an email to the campus community on March 13 denying Wax’s claims and announcing her removal from 1L classes. “Black students have graduated in the top of the class at Penn Law, and the Law Review does not have a diversity mandate,” Ruger wrote. “Rather, its editors are selected based on a competitive process.”

“In light of Professor Wax’s statements, black students assigned to her class in their first week at Penn Law may reasonably wonder whether their professor has already come to a conclusion about their presence, performance, and potential for success in law school and thereafter,” he added. But he also claimed that the move was a “curricular decision” and was therefore not sanctioning Wax for her views, which are protected by her tenure.

Wax would not talk with the Forward on the record about the controversy. But she did write an op-ed in the Wall Street Journal last week pointing out that Ruger had not actually released data that would have proved her right or wrong – which the petition itself also asked for – and called on him to do so.

She also claimed in a return appearance to Bloggingheads last week that she was a mentor to black students and had never received a bias complaint until last year, and that Penn’s blind grading process prevents her from knowing which grade she is giving to which students until the semester ends.

“If you are accused of racism, to deny racism is proof of racism,” she complained.

She also admitted that she did not have data that could prove her original statement about class rank correct.

Wax, 65, grew up with two other sisters in Troy, New York, the daughter of a businessman and a technical writer who were both active leaders in their local Jewish community.

In an 2015 article explaining her opposition to affirmative action programs, Wax described her childhood as “part of a close-knit, observant, conservative Jewish family in a predominantly Catholic town….Although it was common in our culture to complain a lot — about friends, relatives, business partners, bad luck, and the general cluelessness of non-Jews—we were not permitted to complain that anti-Semitism and discrimination were standing in our way. We knew discrimination was out there, but the discussion was limited to anti-Semitism as a general social problem rather than as a stumbling block in individual lives.”

Wax has used her perch to argue against constitutional protections for gay marriage, welcoming low-skill immigrants and what she sees as the decline of cultural norms in lower-class and minority communities.

Her 2009 book “Race, Wrongs and Remedies” argued that cultural-behavioral issues, not racism, are the most important factors preventing African-American progress. Such statements have garnered criticism from black Penn students as far back as 2005.

Nonetheless, according to RateMyProfessors.com, Wax has received mostly high marks from her students in recent years, though one commenter described her as someone who is “obsessed with her own victimization at the hands of forces she believes deserve blame for being victims themselves” but is nonetheless a “decent instructor when she can just stick to the course content.”

Wax has twice won awards for teaching, including the A. Leo Levin Award for Excellence in an Introductory Course – a course that she will presumably no longer be allowed to teach.

This is not even the first time Wax has been caught up in controversy over her statements in the past year. At the beginning of the school year, she co-wrote an op-ed for Philly.com claiming that “all cultures are not equal,” criticizing “single-parent, antisocial habits, prevalent among some working-class whites; the anti-‘acting white’ rap culture of inner-city blacks; [and] the anti-assimilation ideas gaining ground among some Hispanic immigrants.”

Wax claimed in a follow-up interview with the student newspaper that Anglo-Protestant cultural norms are “superior.”

In response, 33 law school colleagues wrote an open letter condemning her statements. Last month, Wax responded in the pages of the Wall Street Journal, saying that her colleagues hadn’t addressed her argument on its merits and that their behavior reflected “a spirit hostile to [unpopular] ideas — indeed, a spirit that might seek to punish the expression of such ideas.”

She also claimed that Dean Ruger told her he was getting “pressure” to banish her from campus and had asked her to take a leave of absence and stop teaching a mandatory first-year course – the same course that she was eventually removed from after the Bloggingheads incident.

A law school spokesman said in a statement in February that the dean’s conversation with Wax was a “discussion with the dean about the timing of a regularly-accrued sabbatical, a discussion the dean has with many faculty members each year.”

A fellow law school professor, Jonah Gelbach, also took issue with Wax’s op-ed, claiming in his own op-ed that it had been Wax who hadn’t addressed her critics’ counter-arguments on their merits. “Whatever her motivations, Professor Wax’s record of key omissions, misleading editing, and false quoting have led me to the opinion that her claims warrant no independent credence,” he wrote.

Another Penn professor, Tobias Barrington Wolff, claimed that Wax is “using [the] language and arguments” of white nationalist groups.

Since the Bloggingheads incident, censure toward Wax has extended beyond Penn to the broader academic legal community.

“This whole thing is turning into an almost Platonic ideal of a particularly beautiful right-wing academic grift,” wrote Prof. Paul Campos of the University of Colorado. “The short con is very straightforward: write something ‘politically incorrect,’ in which for example you point out that it’s now practically a crime to point out the self-evident superiority of white northern European civilization. When the inevitable blowback comes from various lesser breeds without the law, write some more stuff about how the reaction from outraged SJW snowflakes just proves your initial point in spades.”

To be sure, Wax has been defended in conservative publications like The Wall Street Journal and National Review.

“All of the problems listed by Dean Ruger are the direct result of Penn’s affirmative-action policies,” Jason Richwine wrote in National Review. “Those policies generate a racial skills gap in Penn’s first-year law class, and Professor Wax has merely voiced what every rational observer already knows.”

Richwine has co-written articles with Wax (a fact not noted in the National Review article). He has also previously written for AlternativeRight.com, the website of the prominent white supremacist Richard Spencer.

Wax did not respond to the Forward’s query about her relationship to Richwine and knowledge of his past.

Wax is not the first conservative professor to gain notoriety and possible university sanction for promoting controversial “anti-PC” views. Jordan Peterson, a University of Toronto psychology professor whose conservative advocacy has shot him to global recognition, has received multiple warning letters from the administration for his refusal to use the preferred pronouns of transgendered students. And non-tenured professors have claimed that their contracts were not renewed because of their advocacy for unlimited free speech or the state of Israel.

But for Penn students, especially students of color, the decision to remove Wax from her introductory class was the right one.

“It’s been incredible to see how black students and alumni came together, grappled with how to handle this, and moved to create a change, and I hope that it continues,” the president of Penn’s Black Law Students Association, Nick Hall, told Philly.com.

Wax, for her part, sees her experience as part of an ominous trend, which could especially affect Jewish students.

“Jews have been harmed by the threats to freedom of opinion and debate, the punishments for candor, and the decline in rigorous standards in the academy that have accompanied progressive hegemony, which insists upon the sacrosanct status of affirmative action and other policies favored by the left,” Wax wrote in an email to the Forward. She added that such pressures were especially powerful on female students.

“Things were so much better in the 1970s, when I was a young women undergraduate at Yale. I am grateful to have come of age during that period. I wouldn’t want to be an undergraduate at an elite college today.”