Read This 16-Year-Old’s Good-Bye To Her Family, Written As Nazis Deported Her The original letter written by Sala Kirschner on the day of her separation.

When Sala Kirschner, formerly Sala Garncarz, was separated from her family in the midst of the Holocaust, she did not know when she would see them again. Kirschner and her family were stuck in a Jewish ghetto in occupied southwestern Poland’s Sosnowiec when Kirschner’s older sister, Raizel, was conscripted to work by the Germans. Kirschner volunteered to take her place.

Kirschner and her diary survived the war. Her parents, who were sent to Auschwitz, and four of her siblings, did not.

Kirschner passed away in March 2018 at her daughter’s home in Manhattan. Her diary entries and letters, however, remain prescient in the face of American family separation. 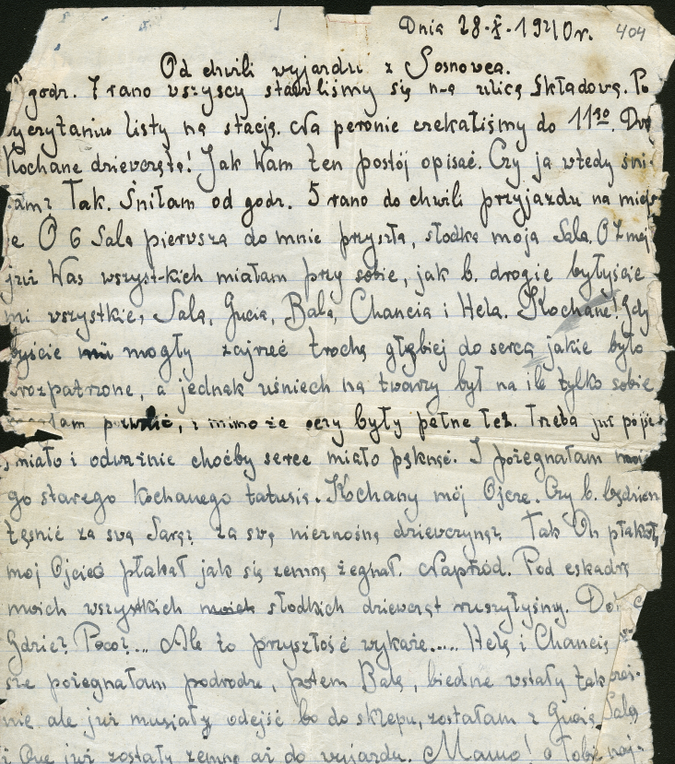 The original letter written by Sala Kirschner on the day of her separation.

Today, her granddaughter, Caroline Weinberg, is speaking out with fellow families affected by the Holocaust.

“Our families represent the survivors and the victims,” says a petition from Survivors United, helmed by Weinberg. “As their descendants, we carry the solemn responsibility to ensure that the trauma and destruction visited on millions of people during the Holocaust because of their religion, sexual orientation, ethnicity, citizenship, and political beliefs will never happen again. We will not allow silence in the face of inhumanity to become a part of our legacy.”

Kirschner left her family at age 16, and would only be reunited with two of her sisters after the war.

“This morning, I came across the attached diary entry my grandmother wrote when she first left home for the camps as a 16 year old volunteering to go in her sister’s place,” Weinberg wrote in an e-mail. It was a trauma that never left her. “

A translation of diary entry she wrote after saying good-bye is below.

At 7:00 o’clock AM, we all arrived at Skladowa Street. After our names were checked, we went to the railroad stations where we waited until 11:00 AM. Dear beloved girls!

How can I describe this waiting period? Was I dreaming? Yes, I had been dreaming, from 5:00 o’clock in the morning until we arrived at the designated location. At 6:00 o’clock, it was Sala [Rabinowicz] who first arrived, my sweet Sala. At 7:00 o’clock, I had you all with me: all my dear ones, Sala, Guica, Bala, Chancia, and Hela.

My dearests! If you could have looked deep in my heart, you would have seen how desperate I was; still I tried to keep a smile on my face as best I could, though my eyes were filled with tears. One must go on bravely and courageously, even if the heart is breaking.

I said goodbye to my dear old father. Dear father, will you miss your Sara a lot? The intolerable girl? My father cried…yes, he did cry when we were saying goodbye. Onward. Accompanied by all my sweet girlfriends, we started out. Where to? Why? Only the future will tell.

I said goodbye to Hela and Chancia first, then Bela; the poor girls had to leave to attend to the store. I remained with Gucia and Sala, and both of them stayed with me until it was time to depart. Mother dearest, I have not mentioned you until now. I was not looking at you, though I was consumed by you. You were pleading with me, you were begging me, almost yelling at me – yet, I want to do what I want to do. Now it’s so hard to say goodbye; what can I say to you, what to wish you?

I said nothing. I did not wish you anything, did not ask you for anything. Still, I could not stop looking at you Mother, because I felt something inside of me tearing, hurting. One more kiss, one more hug, and my mother does not want to let go of me. Let it end already, it is torture. Then I say goodbye to my sisters.

I step into the line-up, and looking around me, I see Sala and Guica, my faithful friends, standing at a distance (since they are not allowed to be near.) Except for my mother and sisters, here everybody and everything are strangers to me. _ _With whom are you leaving me, and to whom are you sending me off?

Dear girls!!! I got accustomed to you more than to my sisters, and now I have to leave you and must go into the unknown world. Will I ever see all of you again? Sala, does it seem possible that I will not be in your house tomorrow to play cards with Frymcia? And you, Szemek, can you believe that you won’t see me again tomorrow? I wonder if he will remember me, or talk about me. But what right do I have to demand it?

We are starting to move. Goodbye everybody; remember me, only please do not pity me, because nobody forced me to do this. I got what I wanted. God help me!!!

Read This 16-Year-Old’s Good-Bye To Her Family, Written As Nazis Deported Her