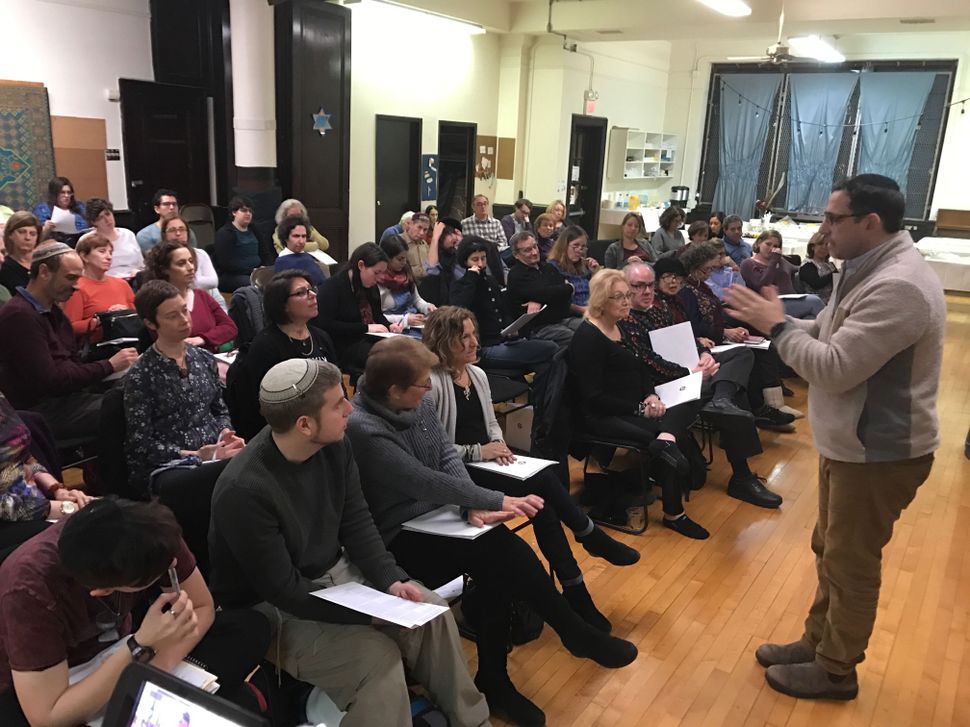 Image by Courtesy of Romemu

Wake up. For morning prayers, sit in silent contemplation. Have breakfast. Study Hasidic meditation. Study Kabbalah. Have lunch. Meditate. Study the Talmud. Do yoga. Have dinner. Chant the evening prayers.

This is how students at a new summer program from Romemu, the congregation on Manhattan’s Upper West Side, will spend their days.

The six-week program is different from similar learning intensives at yeshivas, or Jewish schools, that primarily serve the non-Orthodox world. For its source of spirituality, Romemu’s program will be uniquely focused on learning esoteric and advanced Hasidic and Kabbalistic traditions — foreign to many non-Orthodox Jews. The program will teach that Torah can be learned with body and heart, as well as the mind.

“When people think of a yeshiva, they think Talmud, and they think a certain kind of intellectual learning,” said Rabbi James Jacobson-Maisels, who will be the rosh yeshiva, or dean, of the Romemu program. “And we don’t want to let go of that, but we want to add these other pieces as well.”

Romemu was founded by Rabbi David Ingber in 2008, and now has over 600 members, according to its website. It is the foremost community of Jewish Renewal, a style of Judaism founded by the late Rabbi Zalman Schachter-Shalomi that incorporates meditation and music. Romemu services feature a live band, and prayers and chants that come from the Hasidic tradition, an amalgamation of contemporary Jewish worship and Orthodoxy that Ingber refers to as “neo-Hasidic.”

The summer program will begin with a mostly silent weeklong retreat in New Lebanon, New York. The students -– organizers hope for between 15 and 25 — will then spend the next five weeks studying and praying together, with about six hours per day reserved for text study and close to two hours cumulatively devoted to prayer and meditation.

Romemu is one of several Jewish organizations that are working on transforming the traditional concept of the yeshiva to make it more egalitarian and more accessible: places like Hadar, in New York City; Pardes, in Jerusalem; and Svara, in Chicago. Though each has a slightly different flavor of learning, all are based on the goal of mastering Jewish text study. All also offer programs of different lengths, from one-night learning sessions to yearlong certificate programs.

What makes Romemu different from the other yeshivas, Ingber and Jacobson-Maisels say, is the extent to which meditative practices will be integrated into the curriculum — and especially by drawing those practices not from outside Judaism, but from Hasidic and Kabbalistic sources.

“For sure I’ve never been in a yeshiva where there was time blocked out for sitting in meditation every day,” said Rabbi Sarah Mulhern, a faculty member at the Shalom Hartman Institute. She has also studied at Pardes and Hadar, and said both institutions are doing cutting edge work in bringing higher levels of spirituality and zeal to Jewish practice.

Indeed, Jacobson-Maisels taught has meditation at Pardes and Hadar, although Romemu’s program envisions a more intense focus on that practice. Hadar, through its closely affiliated congregation Kehilat Hadar, is also known for a focus on liturgy and the peak experiences afforded by singing.

Jonathan Bressler is a graduate student in Chicago who has studied at Svara, Pardes and Hadar. He said that, at the latter two yeshivas, text learning is more technical and “legalistic,” and reflection on the deeper meaning of the words is segmented from the process of figuring out what the text means.

But leaders and other alumni of Pardes, Hadar and Svara say that spirituality is central to those institutions — just a different kind of spirituality.

“One of the things that’s really core to Pardes is that we believe that Torah study itself is transformative,” said Rabba Yaffa Epstein, director of education for Pardes’ North American offices. Her remarks echo how Rabbi Benay Lappe, the founder of Svara, has spoken about the spirituality of Svara.

Many yeshivas teach Hasidic and Kabbalistic texts as ways to explore questions about identity and personal growth, said Rabbi Ethan Tucker, the president and rosh yeshiva of Hadar.

“What is distinctive and exciting about Romemu, is that you have a full team of people who are not just learned and talented, but really passionate about translating those texts into contemporary spiritual practice,” Tucker said.

Ingber said that the idea for the Romemu yeshiva comes from his own spiritual journey, which took him from Orthodox Judaism, to Eastern religious practices, to yoga, and finally back to Judaism. He says that the Romemu yeshiva will study the kinds of questions about mindfulness and self-awareness that he felt traditional yeshivas tend to gloss over.

“We had a sense that what we’re offering is not exactly the same thing [as Pardes and Hadar], and there’s enough room,” Ingber said.

Especially today, as meditation becomes an increasingly widespread practice due to the popularity of apps like Headspace, many spiritual seekers of various religious backgrounds might assume it’s exclusively Buddhist in origin. Yet it can be found in many mystical Jewish texts, as well as the teachings of early Hasidic masters, who encouraged a Jewish spiritual revival in the 16th and 17th centuries. But because of the Jewish turn towards assimilation in the 19th century, and the decimation of the Hasidic community in the Holocaust, Jacobson-Maisels said, those traditions are not widely known in the Jewish world. By focusing primarily on these texts, and not on the Jewish legal scholarship of the Talmud as most yeshivas do, Jacobson-Maisels says the Romemu yeshiva will be doing a kind of “spiritual archaeology.”

In its first year, the program is being limited to people who can already read and understand Hebrew texts (with the aid of a dictionary), and organizers plan to give most of the spots in the program to people aged 20 to 39. The course is aimed at aspiring Jewish educators, clergy and lay leaders — people who can take a summer off, and who have the potential to influence and teach others.

Romemu says its program is partially funded at the moment; the donations that support it come from individuals and not foundations. Tuition for the program is on a sliding scale, from $500, at the lowest level, to $15,000, for individuals who are able and willing to pay the full cost. They are also offering living stipends and a limited number of fellowships.

However, support for such programs is becoming easier for educators to find, because they’re becoming more popular among national philanthropists for Jewish causes, said Rebecca Ennen, who has studied at Hadar and has observed trends in philanthropy while working as the deputy director of Jews United for Justice, a not-for-profit.

“There’s been so much money invested in [millennials], and our Jewish young adulthood, and frankly it’s great to see that money go towards programs that are intensively about Torah learning, instead of like, Jewish bowling,” she said.

Ennen said that what is driving demand for text study is both a “search for meaning,” as well as the kind of accountability that comes from making a commitment to learning with a group.

“When you have a cohort, people have more of a reason to show up, to be with their community,” she said.