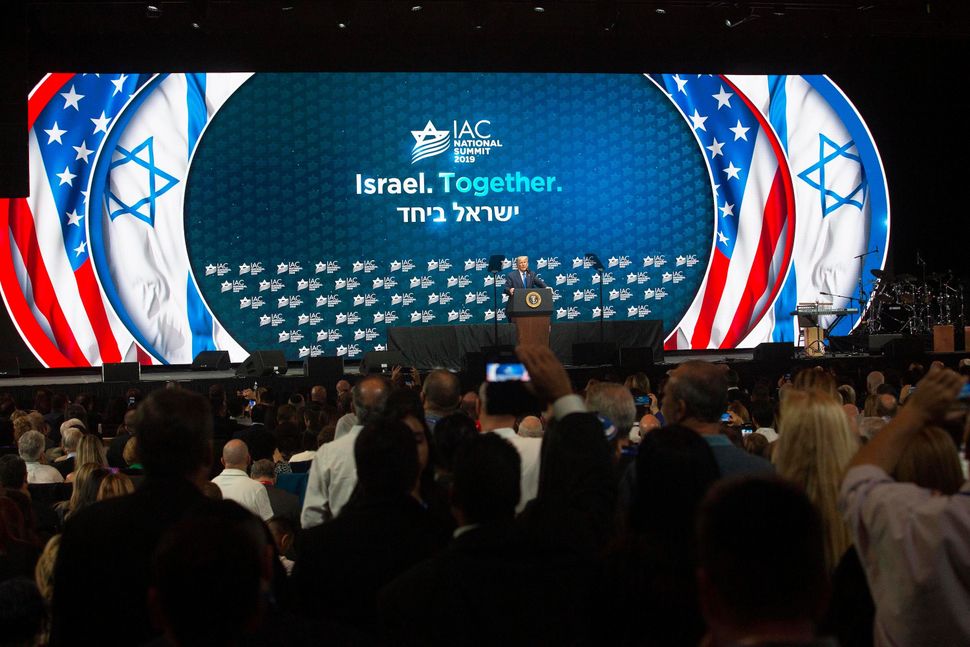 President Donald Trump speaks during a homecoming campaign rally at The Diplomat Conference Center for the Israeli-American Council Summit on December 7, 2019 in Hollywood, Florida. Image by Saul Martinez/Getty Images

In his latest controversial comments about the Jewish community, President Trump said in a speech to an Israeli-American group on Saturday that some Jewish people “don’t love Israel enough” and that Jews are “not going to vote for the wealth tax” proposed by Sen. Elizabeth Warren.

Trump’s speech caused further debate over whether he uses anti-Semitic language. But it also shined a spotlight on the organization he spoke to, the Israeli-American Council. Here’s what you need to know about the group:

It was founded to provide services to Israeli-Americans in Los Angeles:

The organization was founded in 2007 in Los Angeles, which along with New York City has the biggest population of Israeli-Americans in the United States. Community leaders in the City of Angels noticed that a community rally in support of Israel during the Second Lebanon War the previous year hardly had any local Israeli participants, so they started an organization – then called the Israeli Leadership Council – to organize that segment of the community and bring them together around their shared culture, language and history.

The organization would help integrate Israelis into the traditional American Jewish organizational infrastructure – many observers say Israeli Jews living in the U.S. are less likely to join synagogues or other local Jewish institutions than their American-born counterparts – while also providing unique Israeli-themed programming and serving as a voice for their specific concerns.

It has hugely expanded in the last few years:

The organization’s main financial backer for its first few years was Israeli-American entertainment guru Haim Saban, who is also a major Democratic donor. But in 2013, casino mogul and Republican megadonor Sheldon Adelson, whose wife Miriam is Israeli, started giving millions of dollars a year to the organization, allowing it to massively expand across the country. That was the same year the organization rebranded to be the Israeli-American Council.

Is it a social group or a right-wing political organization?

But critics argue that since the Adelsons became its most generous supporters ($6.5 million of the group’s $19.7 million of revenue in 2017), the IAC has moved in a right-wing direction, engaging far more in pro-Israel political advocacy, and a hawkish brand of advocacy at that. While last year’s conference featured both Republican Vice President Mike Pence and top Congressional Democrats Sen. Chuck Schumer and Rep. Nancy Pelosi, the only major Democrat present this year was former Democratic National Committee chair Rep. Debbie Wasserman Schultz, according to Jewish Insider.

Adelson himself said at the IAC’s annual conference in 2017 that the IAC would be more supportive of Israel than AIPAC, the biggest pro-Israel lobby. Though reporters who attended the conference have found that many rank-and-file members are less conservative than its leadership.

They represent a growing population of Israeli-Americans

Nobody knows how many Israeli-Americans live in the United States, largely because demographers don’t have the same definition of what makes someone Israeli-American. But all scholars agree that the population is growing. A 2014 research roundup from Haaretz put the number anywhere from 200,000 to 1 million, though the Census Bureau found only 142,000 Israeli-born people living in the United States in 2016.