Defying the governor but heeding the President, a Los Angeles synagogue opens its doors 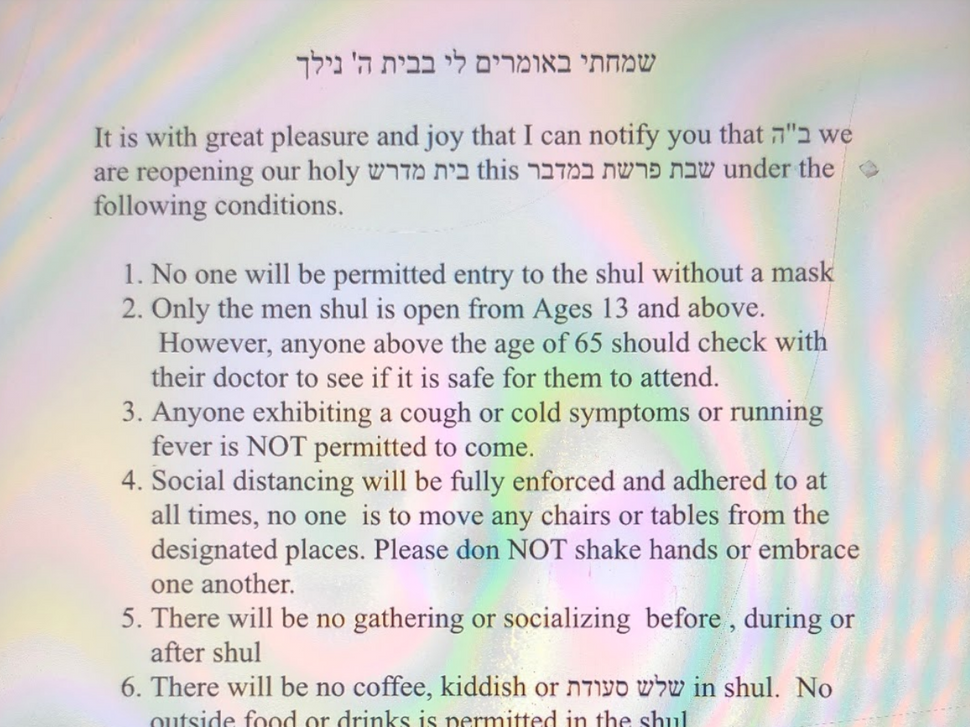 A partial list of the rules Congregation Etz Chaim enumerated for its reopening.

Mere hours after President Donald Trump called on governors to open places of worship, calling the institutions “essential,” one Los Angeles congregation pounced on the opportunity. In defiance of a California state ban on religious gatherings due to the potential spread of coronavirus, it opened for Friday night services.

Members of Congregation Etz Chaim, an Orthodox congregation of about 70 families that meets in a house in Hancock Park, received an email on Friday announcing “with great pleasure and joy” that Sabbath services would convene again beginning this evening.

Rabbi Chaim Baruch Rubin, who leads the synagogue, said that California permitting some businesses to reopen while prohibiting religious gatherings was a violation of his constitutional right to worship, and thus did not have to be obeyed. 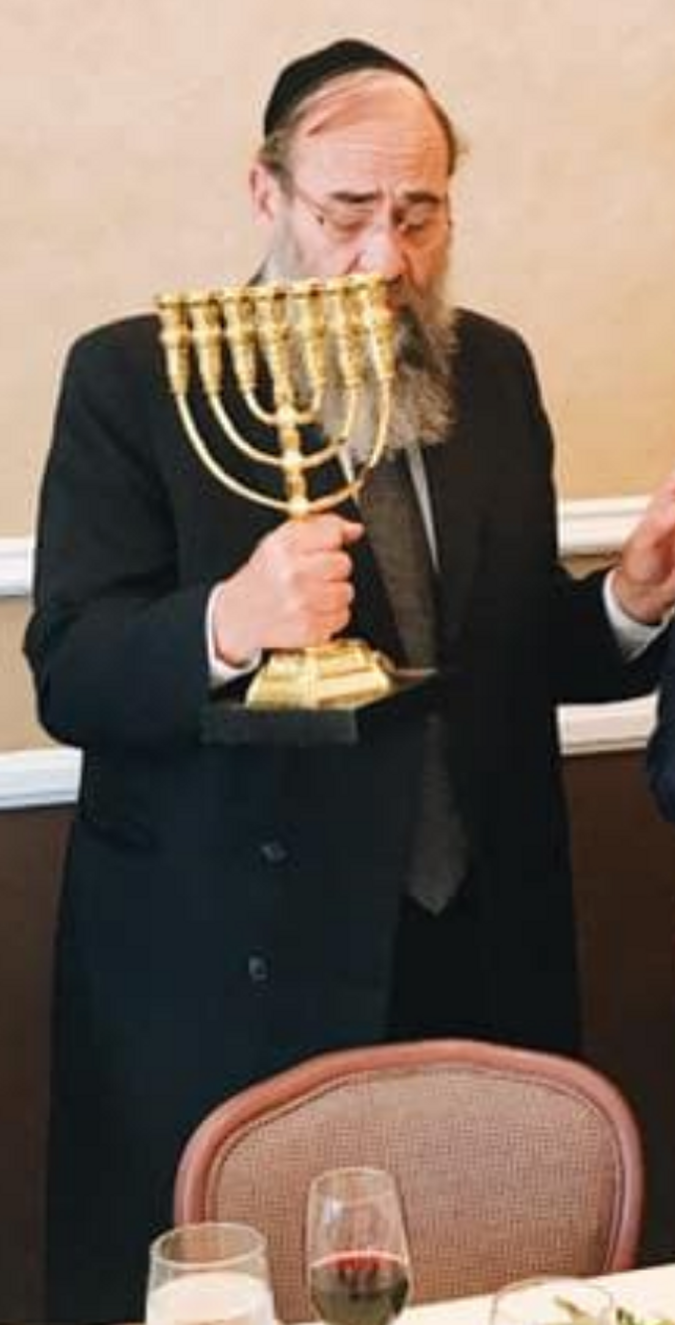 “Sometimes the state law becomes so ridiculous, so adverse to God’s law, without any rationale,” Rubin said. “When you have public safety as a primary concern, I agree with that. But when you allow sports activities, and massage parlors, and marijuana distributors and liquor stores, and every activity that is non-essential, or not as essential as prayer, then quite frankly, the law is useless.”

In Rubin’s view, Trump’s demand, issued during a press briefing Friday morning, gave him all the authority he needed to reopen.

“Sometimes it’s better to ask for forgiveness than permission,” the rabbi said, adding that the local police had assured him they wouldn’t arrest anyone. “Jokingly, I said, If you do, I’ll have the president just pardon me.”

An officer at the Wilshire precinct said he was unaware of such a conversation. The office of Los Angeles Mayor Eric Garcetti did not return a request for comment.

The decision to reopen breaks ranks with other Orthodox institutions in Los Angeles, over a dozen of whom signed a letter committing to staying closed an additional two weeks after the state permits gatherings of ten or more. Ten men, age 13 and older, make a minyan, or quorum, for Orthodox communal prayer.

Rabbi Jason Weiner, who has been convening local Orthodox rabbis with medical experts and state officials during the pandemic, said that some Orthodox congregations who signed the letter had been clamoring to hold services again, but until today the line had held.

“All the shuls had been kind of united and waiting for government guidance,” said Weiner, director of spiritual care at Cedars-Sinai Medical Center and head of Congregation Knesset Israel in West Los Angeles. He expected an update from the governor’s office as early as Monday.

But nothing had been unclear about the current instruction, he said. “As far as I know, it’s still illegal.”

Rubin’s contention with the state and local public health order stemmed from what he saw as an inconsistency between the standards applied to religious institutions and secular ones.

Some businesses and offices had been allowed to reopen in California as of May 8 under its Stage 2 guidelines, but social gatherings — including religious ones — were still proscribed.

Rabbi Rubin pointed out that he had been quick to close Etz Chaim ten weeks ago when the pandemic first hit, and had condemned secret minyanim since then. Hancock Park may have been the Jewish neighborhood hit hardest by the Covid-19 pandemic in Los Angeles, but Rabbi Rubin said none of his congregants had fallen ill, a claim The Forward was unable to verify before publication.

If everything were closed, Rabbi Rubin said he could abide by it, but restrictions have been eased.

“The governor has approved so many other activities,” he said. “For him to equate my going to shul to his going to the movies, is just insulting to me. I find that repulsive.”

Dr. Julie Higashi, an Orthodox Jewish public health physician, said that while she, too, was eager to get back to shul, the ban on social gatherings remained necessary so the effect of smaller openings could be evaluated. “It’s hard to know what the impact of an intervention is without waiting a few weeks to see what happens with the numbers,” she said.

The effective transmission number, which indicates how many people an infected person spreads the disease to on average, is below 1 for the first time in Los Angeles County, an important threshold that could put contact tracing within reach. Higashi said skipping steps on the way to reopen could jeopardize that progress.

The notion of social distancing, outlined in Rabbi Rubin’s letter, will force some modifications to services at Etz Chaim. For example, the blessings over the Torah,or _aliyot__, will be given to seven people, each of whom will recite the blessing from their seat. Masks will be required at all times, and the chairs will be spaced out. There will be no kiddush after shul, and socializing before or after services is prohibited.

Other rituals will proceed as usual.

“I don’t think that hagbah is going to kill anybody,” said Rubin, referring to the traditional raising of the Torah.

Higashi said that safely implementing social distancing into any type of gathering wasn’t as simple as putting on a mask and standing six feet apart.

Even if reopening goes smoothly and no one gets sick, Weiner expressed the concern that it would bring shame upon the Jewish community.

In an interview last week, Rabbi Dr. Aaron Blatt, an infectious diseases expert who is assistant rabbi at Young Israel of Woodmere in New York, said that caution to avoid chilul Hashem, or desecration of God’s name, was among the factors considered by poskim, or experts on Jewish law, in the drafting of the OU’s guidelines for reopening.

Rubin said insisting on the right to pray was just the opposite. “I think it’s a kiddush Hashem,” he said, or a sanctification of God’s name, as well as a positive display of American citizenship. “We are praying for the state government, for the health of our community, for the sick and the disabled, for our economic success. We’re praying to God for you get the wisdom and the courage to enact right laws, so that our society can get back to where it was.

The Jewish legal concept of dina d’malchuta dina, that the law of the land is the law — stipulated dozens of times in the same book of Jewish law that contains the rules of communal prayer — did not apply in this case, Rubin said, because the law of the land was effectively moot.

“If you enact laws that the people do not want to adhere to, it’s an invalid law,” he said.

Opening in defiance of local and state orders is familiar territory for the synagogue.

When the congregation, once a small daily minyan that met in the house of Rabbi Rubin’s father, began holding Shabbat services, neighbors complained. The synagogue then requested a variance to build a new synagogue on a nearby property, which the city denied, ruling that Etz Chaim was in violation of local zoning ordinances.

After the state of California affirmed the ruling, a new federal law granting special privileges to religious institutions forced the city to back off its stance. Etz Chaim was allowed to build its current home, which looks like a two-story house, and the city of Los Angeles paid the synagogue nearly a million dollars in attorney’s fees.

When asked if he was worried his decision would ostracize him in the Orthodox community, Rubin replied, “Do you know anything about me?”

Etz Chaim’s modified seating plan will accommodate about thirty men, about a quarter of the usual capacity, and when there are no more open seats, security has been instructed to turn people away. Because Rubin is older than 65, he plans to sit in the upstairs balcony, in what was the women’s section before the pandemic.

Women, who do not have the same communal prayer obligation as men, will not be permitted to attend.

Louis Keene is a journalist in Los Angeles.

Defying the governor but heeding the President, a Los Angeles synagogue opens its doors