Jews without buffets — and your weekend reads 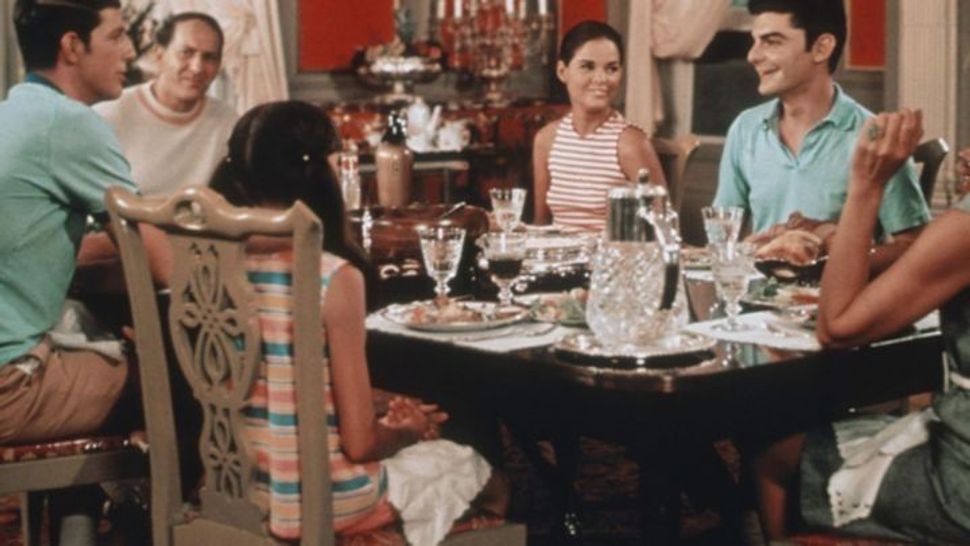 Jodi Rudoren, our editor-in-chief, is off today for her twins’ bnai mitzvah, so Rob Eshman, our national editor, is filling in.

In the throes of another wave of COVID-19, on the brink of Thanksgiving, Jews have still not come to grips with one of the worst effects of this pandemic: no buffets.

The enormity of the problem occurred to me shortly after the first lockdown lifted. We had three families over to our backyard for a birthday celebration. Reflexively, I used one table to set out all the food — a huge paella I had just made over oak logs, a Spanish potato-and-egg tortilla the size of a DISH antenna, a tapas plate of olives, fried almonds, roasted peppers and home-pickled vegetables. To be able to cook and serve food I love to people I love felt like a healing.

“You can’t do that,” one of my friends said. “What are you thinking?”

What was I thinking? I brought out some paper plates, put on gloves, and dished out portions to each table. It wasn’t the celebratory communal feast I imagined; it was a socially-distanced boxed lunch.

The buffet, it turns out, is one of those underappreciated cornerstones of American Jewish life. It’s mocked plenty. Think of the Fellini-esque relatives gorging on a chopped liver sculpture in “Goodbye Columbus.” Think of “The Marvelous Mrs. Maisel” when the shofar blast signals the end of the Yom Kippur fast and the congregants break for the buffet en masse. “God, I would kill for the hole of the bagel right about now!” says one.

There’s nothing wrong with table service, but there’s something very haimish about waiting in that line, whether at the kiddush, or the bat mitzvah, the shiva, or the backyard. You talk, you inspect, you help yourself — remember helping yourself? — you walk back to your table like you just won a prize. You sneak seconds.

At least until this week’s spike, modified buffets were making a comeback at clubs and restaurants, the food behind plexiglass, masked and shielded servers dishing out portions as you point your finger, turning a celebration into a school cafeteria. The days of digging into a nice spread with your own two tongs may be a long way off, likely to make a comeback sometime after restaurants reopen but before, say, your local shvitz does.

I don’t know where all of this leads us. I do know that eating from a common table has always been a marker of common faith. The communal Passover table gave rise to the Catholic mass. “Before it was a service, mass was a meal,” writes Alain de Botton in “Religion for Atheists.” We applied the power of the common table to our life cycle celebrations, not to mention to our fundraisers. To steal from Ahad Ha’am, as much as Jews have kept the buffet, buffets have kept the Jews. Did we eat together because we are a community, or are we a community because we eat together?

In the meantime, we don’t even have the buffet’s kid brother, which is dining family-style. People who aren’t in your bubble can’t share from the same platter, period. Thanksgiving will require vigilance, planning and disposables.

May you have a happy holiday, just the same. Next year, may we all be together, in line.

Click here to download and print a PDF of the following stories from the Forward this week.

As of this writing, the president who could never say “I’m sorry,” still can’t find it within himself to say “I concede.” Dov Linzer illuminates how the Torah speaks exactly to this predicament in his op-ed, “What does the Torah say about refusing to concede? A lot.”

In the Department of Silver Linings, Dean Obeidallah argues that four years of the outgoing administration has actually brought America’s Jews and Muslims closer together.

When the new administration settles in, rumors are it might include Los Angeles Mayor Eric Garcetti. Danielle Berrin takes a deep dive into whether his supporters and critics think L.A.’s first elected Jewish mayor deserves a place at President-elect Joe Biden’s table.

All eyes are on Georgia, where a Jan. 5 runoff over two seats will determine whether the Senate flips to the Democrats. This week, Democratic contender Jon Ossoff, who is Jewish, defended the other Democratic candidate, Rev. Raphael Warnock, against charges that he is anti-Israel. The charges, Ossoff said, “make me sick.”

As the virus rages, it’s taking a toll on the Jewish community of Chicago. But this week also brought three viable vaccines, including the one developed by Moderna’s Chief Medical Officer (and former IDF medic) Dr. Tal Zaks.

Bad news: antisemitism is up, according to the just-released FBI report. Even more bad news: Molly Boigon, who covers extremism for the Forward, reports that the actual incidents are likely undercounted. “This is a big problem,” said ADL’s Jonathan Greenblatt.

Need some escapism? Try Netflix’s “The Queen’s Gambit,” the Scott Frank-created limited series based on the 1983 Walter Tevis novel. And PJ Grisar’s profile of Susan Polgar, the first woman to qualify for the World Chess Championship, is a must-read accompaniment.

Or maybe “The secret Jewish history of the condom.”Enough of disease, political drama and uncertainty — read Nathan Abrams’ account of Jessica Borge’s new book, “Protective Practices: A History of the London Rubber Company and the Condom Business” to learn that a) a Jewish sausage maker started London’s first condom factory using, yep, you guessed it; b) England’s largest condom maker, Durex, was the brainchild of Russian Jewish immigrants; and c) there is no limit on the number of double entendres a writer can slip into a story on condoms.

Finally, Thanksgiving. Read how our experience with Passover and the High Holidays can teach America how to celebrate during a pandemic. Make this Middle Eastern-spiced pumpkin pie. Learn the Yiddish Words of the Day shver and shviger — father-in-law and mother-in-law — in case they are in your bubble. And have a very safe and happy holiday.

Jews without buffets — and your weekend reads