A Jewish look at Tuesday’s Senate runoffs in Georgia 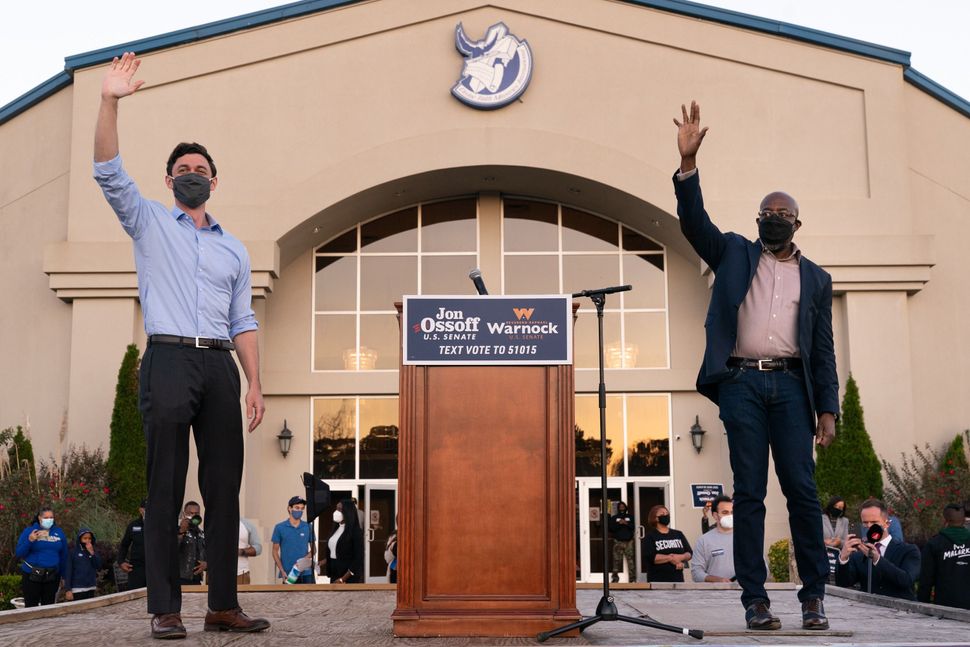 Georgia’s twin Senate runoff elections on Tuesday have drawn intense national attention, as they will determine which party controls the Upper House. They also have several significant Jewish storylines.

The Democratic challengers, Jon Ossoff and the Rev. Raphael Warnock, each raised more than $100 million between mid-October and mid-December, compared to $68 million and $64 million, respectively, for the Republicans they are trying to oust, Sens. David Perdue and Kelly Loeffler. But polls favor the incumbents.

Ossoff would be the first Jew elected to the Senate from a Deep South state since Reconstruction. He and Warnock have formed a tight alliance in an ugly race where Israel and white supremacy have emerged as major themes. Here’s a quick Jewish look at the race in its final hours:

Politically, Ossoff, 33, is a center-left Democrat whose positions line up with the majority of American Jews. He supports J Street, which supports Israel but is critical of its occupation of the West Bank, and is known for his advocacy of reproductive rights.

Personally, he’s the next-best thing to a Jewish doctor: He’s married to one, Dr. Alisha Kramer, to whom he proposed during his 2017 run for Congress. He lost that race, but his election-night party was apparently a great time, with the vibe of a Bar Mitzvah.

A darling of Southern Jewry

Luke Goldstein, a Forward contributor with family roots in 19th-century Georgia, wrote recently about how much an Ossoff victory would mean to the Jews of the South.

The 1915 lynching of Leo Frank still haunts Southern Jews, Goldstein wrote, and while Ossoff’s race is a symbol of hope, it has also highlighted the persistence of Jew hatred in the South and across the United States.

There are very Jewish elected officials of any kind in the Deep South. Georgia, where Jews are 2% of the population, has only one Jewish state legislator out of 236. That’s one more than there are in Alabama, Arkansas, Mississippi, North Carolina or Tennessee.

While Georgia’s November balloting saw Ossoff do well enough to force this week’s runoff, it also resulted in the election Marjorie Taylor Greene, a promoter of the antisemitic QAnon conspiracy theory, to the House of Representatives, Her district sits just a few miles from where Frank was murdered. Senator Loeffler endorsed Greene. She has also posed for a photo with Chester Doles, a former member of the Ku Klux Klan. (Her campaign disavowed him afterward.)

And last summer, the Forward broke the news that the Perdue campaign used an image of Ossoff with his nose artificially enlarged, a classic antisemitic caricature. The ad was removed shortly after the story was published.

Loeffler has tried to cast Warnock as a fierce opponent of Israel, although he has the support of many rabbis, and in the company of one of them even attended the AIPAC policy conference. Liberal Jewish groups backing the Democrats have tried to target Loeffler as an antisemite, spreading pictures of her with Doles. and other members of his group, American Patriots USA. The tactic has been at least somewhat successful: the hashtag #KKKKelly was trending on Twitter last week.

They’re at it again.

We’ve come too far to go back to Jim Crow.#GASEN pic.twitter.com/xD757FUfmd

When Loeffler’s comments about Warnock and Israel first started to gain traction, Ossoff issued a statement — in response to a call from the Forward — saying that her attacks made him “sick.”

Indeed, the runoffs have been notable for the intensity of the cooperation between Warnock and Ossoff. Political experts say the partnership may be mutually beneficial: as a Jew, Ossoff’s backing on the Israel issue protected Warnock against accusations of antisemitism, and Warnock’s wider name recognition is expected to draw more Democrats to the polls, where they will likely support both men.

A Jewish look at Tuesday’s Senate runoffs in Georgia