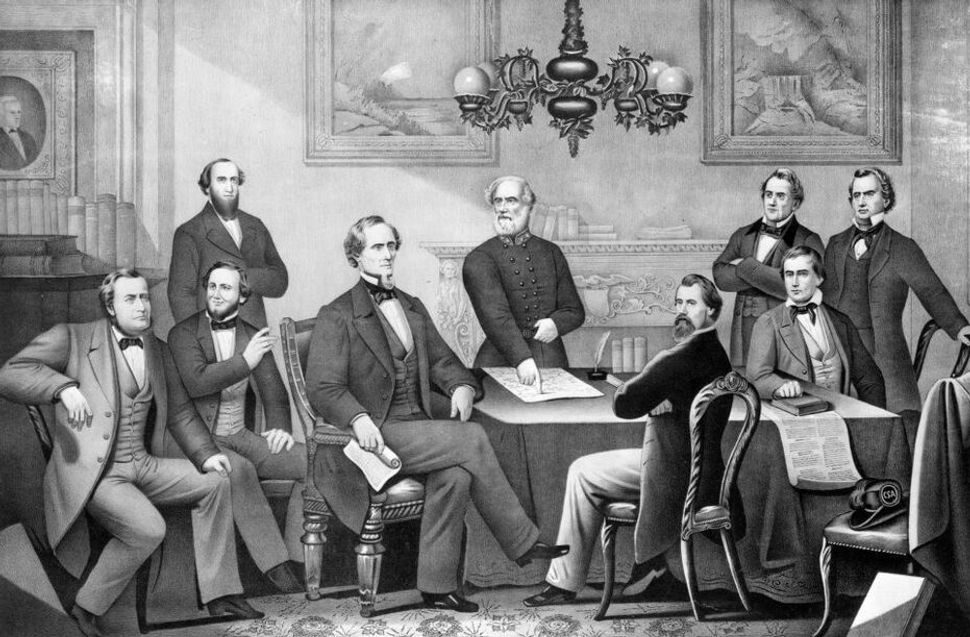 After the Washington Post released the first complete accounting of members of Congress who owned enslaved people, the Forward ran all nine Jews who entered Congress before the ratification of the Thirteenth Amendment, which abolished slavery, through the database.

What we found: Only two Jews on the list of more than 1,700 congresspeople — David Levy Yulee, who eventually converted to Episcopalianism, and Judah P. Benjamin — were enslavers. While many of the lawmakers in the Post’s database, which draws on thousands of pages of census records and historical documents, have not been publicly acknowledged as enslavers, Yulee and Benjamin’s history of enslaving has long been well known.

But as the country grapples with tensions over the history of racism, historians say it’s still worth re-examining their legacy.

Yulee and Benjamin’s history isn’t a surprise, said Michael Hoberman, an English studies professor at Fitchburg State University who is currently writing a book about how early American Jewish history is remembered today. But, he said, it’s a reminder that “many Southern Jews owned slaves, just like any other wealthy Southern family did.”

Yulee, who was the first Jewish senator, represented Florida from 1845 to 1851 and 1855 to 1861, and over the course of his life enslaved more than 1,000 people. He was known as the “Florida Fire-Eater” — the latter term referring to pro-slavery Democrats who supported secession before the Civil War.

Yet it is only recently, historically, that the public has begun to contend with the fact that the two Jewish lawmakers were enslavers.

For instance, it was only in June of 2020 that a plaque in Charlotte, N.C. dedicated to Benjamin and paid for by two synagogues was removed. Hoberman mentioned that Benjamin, who held multiple significant posts in the Confederate government, was for a long time romanticized both by Southern Jews and in popular literature. One example: famed writer Viña Delmar’s 1956 novel “Beloved,” which celebrated Benjamin’s tireless devotion, including to Louisiana’s political interests, the Confederacy’s success and, most of all, his marriage to his wife — while failing to account for his dedicated advocacy for slavery and his ownership of enslaved people.

And while the plaque honoring Benjamin was removed during the nationwide movement to remove statues of Confederate figures that surged during the racial justice protests of 2020, a statue of Yulee, who also became a leader in the Confederacy, remains standing in the small northern Florida town of Fernandina Beach.

Hoberman said removing such monuments is a valuable step, but far from the only one needed to reckon with the effects of the actions and beliefs of Yulee, Benjamin and their contemporaries.

That reckoning, he said, requires examining the racial wealth gap, the mass incarceration of Black people and the many other disparities and injustices that are the legacies of slavery.

And while Benjamin once declared that “slavery is against the law of nature,” Hoberman noted that there was no evidence that he — or Yulee — treated the people they enslaved more humanely than other enslavers did.

“These were people that enthusiastically participated in slavery,” he said.

But, he said, we also shouldn’t single them out for criticism among the ranks of enslavers, noting that Benjamin Wade, a Republican senator from Ohio and Benjamin’s contemporary, publicly referred to Benjamin as an “Israelite with Egyptian principles.”

“The guy had a point — here’s a Jew who inherited the legacy of Exodus, and yet he is an enslaver and advocate for slavery,” Hoberman said. “But why should Benjamin be held to a higher standard than anyone else?”

That kind of pointed criticism, Hoberman said, “means that when Jews do something unpopular or problematic, they did it because they were Jewish. It invites the rest of the world to condemn us every time we fall short or cross some line. It’s deeply problematic and dangerous.”

And, according to Hoberman, holding Jews like Benjamin and Yulee to a higher standard than everyone else also does a “disservice” to the Jewish people.

“We can’t morally improve them — they’re dead, and it’s a mistake to try to redeem them,” he said. “But what we can do is try and understand how these figures from the past shaped the world in which we live today.”