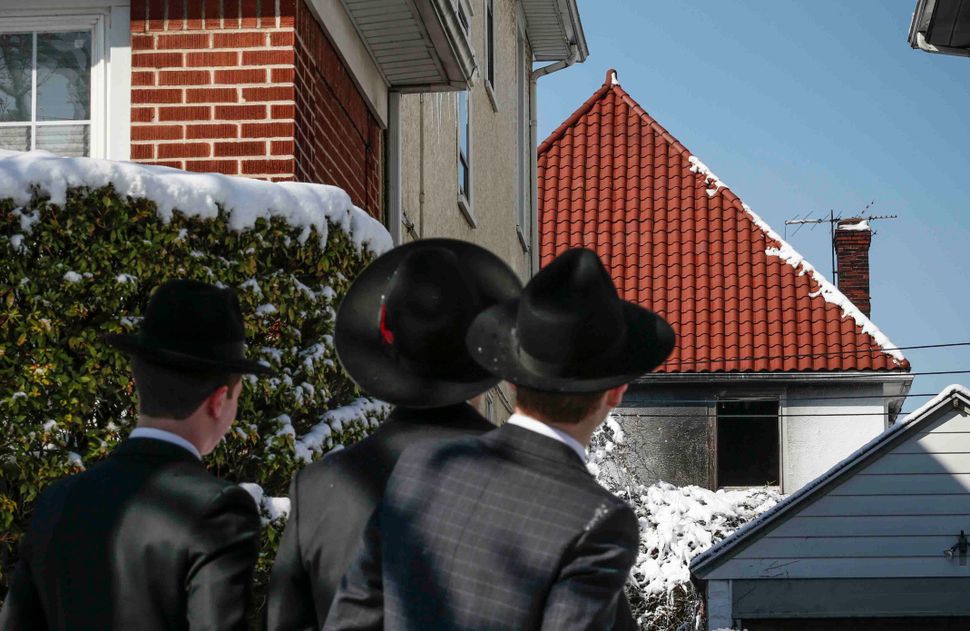 Orthodox Jews gaze at Brooklyn home destroyed by fire started by a malfunctioning hot plate left on over Shabbat. Image by Getty Images

(JTA) — The Brooklyn mother who lost seven of her children in a house fire said in her first public remarks on the March 2015 tragedy that she wants to build a center for families on the site of her razed home.

“What consoles me most is working on the positive — not lamenting on the negative,” Gayle Sassoon told the New York Post in her first interview since the fire in the Midwood neighborhood of Brooklyn.

Sassoon and one daughter, Siporah, 16, escaped by jumping out a window on the second floor.

Sassoon first ran into the fire to try to save her children, leading to third degree burns on 45 percent of her body, including her face, which is covered with an elastic medical mask.

Her seven children killed in the fire –  Yaakob, 5; Sara, 6; Moshe, 8; Yeshua, 10; Rivkah, 11; David, 12; and Eliane, 16 — are buried in Israel, where her husband Gabriel lives. Gabriel Sassoon was out of town at a religious conference when the fire consumed the family’s home.

An investigation determined the cause of the fire was a hot plate left on for Shabbat. FDNY Commissioner Daniel Nigro told the Post that it would have been “impossible” for Sassoon to save her children.

The family center envisioned by Gayle Sassoon and already designed by an architect has seven pillars to represent the seven children which would each bear one of their names, and a “magnificent atrium for Siporah,” she told the Post.

Sassoon thanked the public for helping her start to recover from the tragedy.

“I’m just so appreciative for what the world did. The people all held up my family when we were about to crumble,” she told the Post.  “I’m so grateful the world got to know who my kids were, even if it was in an unfortunate light.”