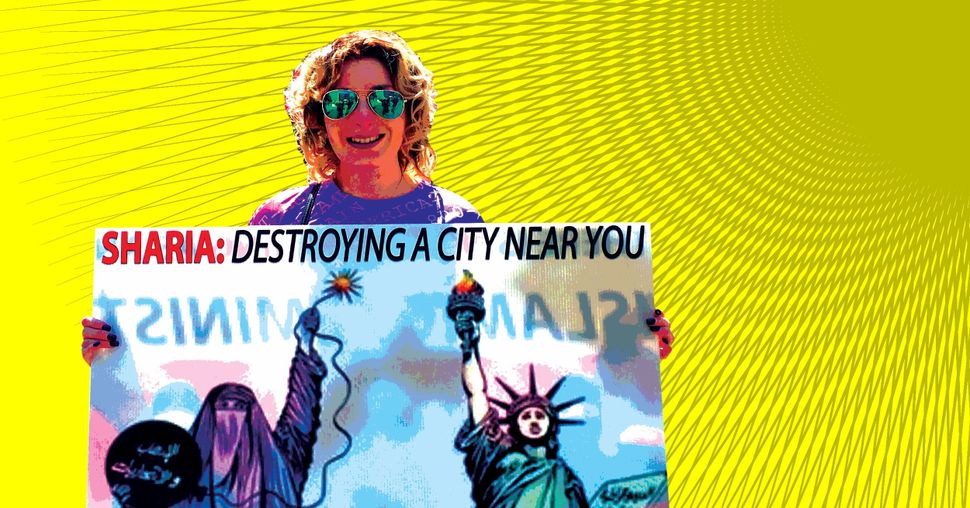 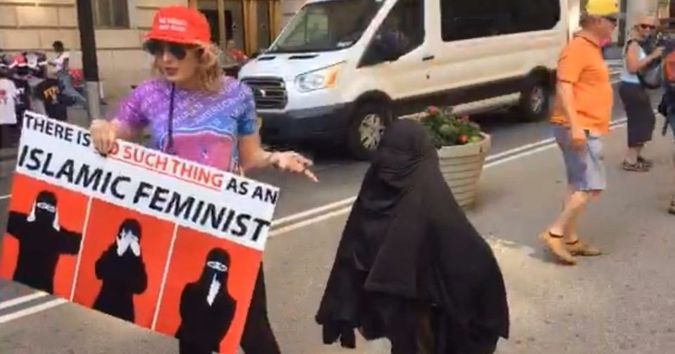 Laura Loomer put a burqa on the “Fearless Girl” statue in New York’s Financial District during the March Against Sharia on June 10th. Image by Laura Loomer

On Tuesday afternoon, Laura Loomer was busy prepping her Halloween costume while tweeting about how the FBI had mishandled the Las Vegas shooting investigation. But as soon as she saw news of a vehicular terror attack in New York City, she sprung into action. Responding to reports that the driver had yelled “Allahu akhbar” upon exiting the vehicle, Loomer began a days-long tweet-storm to register her hatred of Islam.

“Leave it to Muslims to ruin everything,” she wrote. “People can’t even enjoy #Halloween without those savages f**king everything up for everyone.”

“Then let me be the first to say I never want another Muslim entering this country EVER AGAIN!” she tweeted out a few minutes later. She added the hashtag #ProudIslamophobe.

Her tweets and videos led her to become a Twitter trending topic. She received condemnation from public figures, coverage in outlets like NBC and a ban from one of the most popular apps in the world.

Loomer, a self-styled “citizen journalist” who frequently contributes to the conspiracy program Infowars, has seen her profile rise over the past month due to her coverage of the Las Vegas shooting.

By gaining more attention for her theories about shooter Stephen Paddock and employees of the Mandalay Bay casino, she has rebounded from her split with her last employer, Rebel Media, over her refusal to stop pestering Hillary Clinton on her book tour.

Now, fueled primarily by her own money and crowdfunded donations, Loomer is in the national news once again. Though she first emerged into the national spotlight after interrupted a production of “Julius Caesar” to protest what she called the “normalization of political violence against the right,” her focus has shifted away from attacking liberals to attacking Islam.

On the night of the truck ramming, Loomer was live streaming from the scene of the attack, tweeting out hashtags like #BanIslam, #CNNisISIS and other attacks on the “#FakeNews media” until 3 a.m.

Loomer then began a litany of tweets about Muslims who happened to be walking near the scene of the crime, and blamed the attack on New York City Mayor Bill de Blasio.

“Muslims are out in full force at the scene of the NYC #ISIS attack today rubbing it in everyone’s face,” she wrote. “Aimlessly walking around in hijabs.”

Muslims are out in full force at the scene of the NYC #ISIS attack today rubbing it in everyone’s face. Aimlessly walking around in hijabs. pic.twitter.com/UV0DOikmJy

Uber and Lyft quickly banned Loomer from their ridesharing services after she publicly attacked the companies for hiring Muslim drivers. Loomer also complained of not being able to find a rideshare driver who was not Muslim, despite the fact that the companies’ apps show only a driver’s name and picture.

Loomer is one of the few women — and one of only a handful of Jews — prominent on the far right. Her history of anti-Islamic activity stretches back to her time at Barry University in Florida, when she tipped off a local blog that an imam had been invited to a 9/11 memorial event on campus.

“We live in a Judeo-Christian country, and they let the imam open up the ceremony,” she said. “He was literally chanting ‘Allahu akhbar.’ That’s not cool, because that’s what the terrorists were chanting.”

Loomer gained some notoriety in far-right circles when she posted a video “exposing” her school’s willingness to let her create a group that would ostensibly provide “relief” — like flashlights — to the Islamic State.

Though the Islamic State group fundraising incident “was a stunt,” Loomer told the Forward in July, it was meaningful because it “prov[ed] a point about how politically correct universities are.”

Stunts have remained central to Loomer’s repertoire. On Election Day last year, she requested a ballot under the name Huma Abedin while wearing a burqa. At the New York edition of the national March Against Sharia on June 10, Loomer put a burqa on the “Fearless Girl” statue in the Financial District.

Though Loomer has clashed in the past with prominent conspiracists and leaders of the “alt-right,” she has tried to remain in a detente with far-right anti-Semites who share her fear of Muslims.