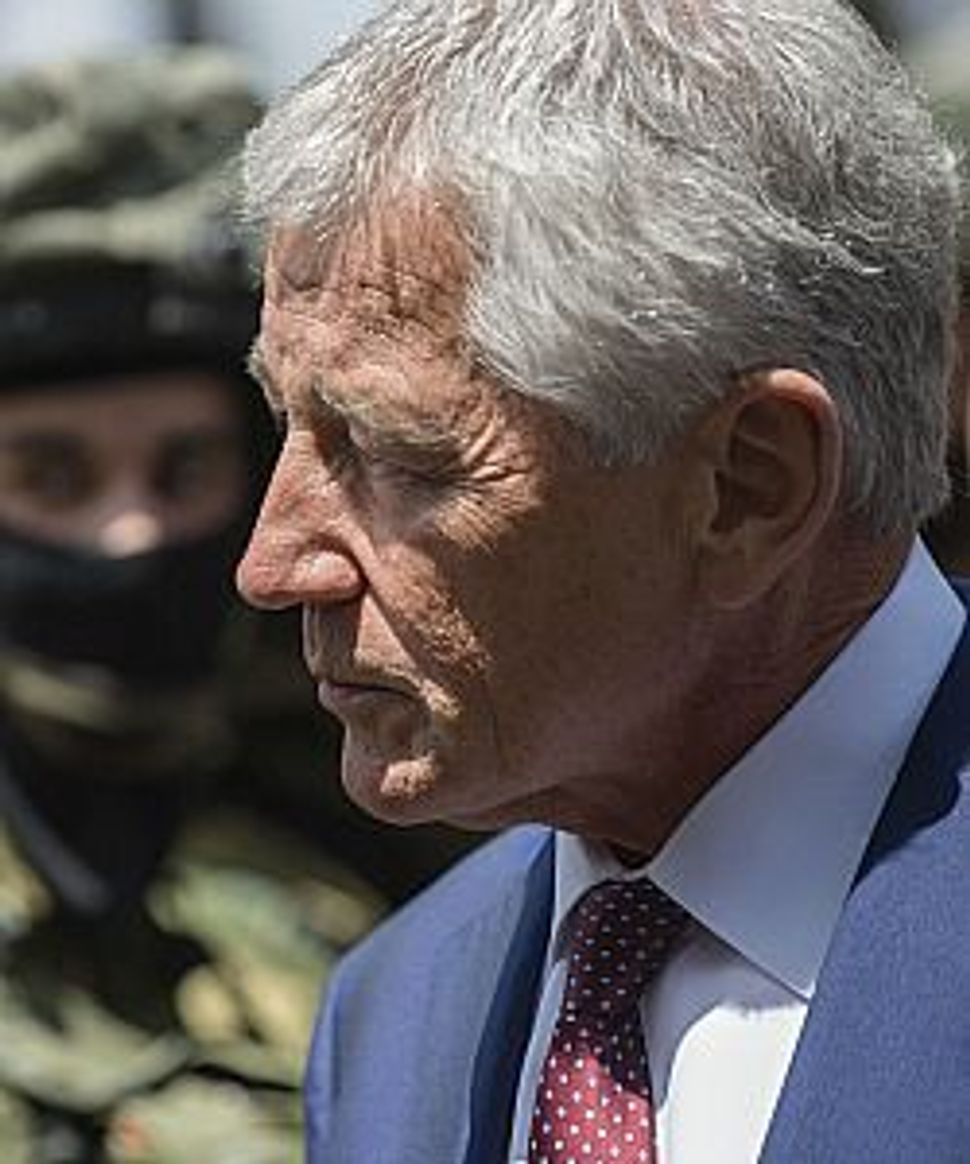 Defense Secretary Chuck Hagel’s April 23 visit to Israel has yielded some interesting fallout. Not least is the apparent puncturing of the image his opponents tried to paint of a sworn enemy of Israel. Haaretz’s Chemi Shalev does a pretty nifty job of skewering the anti-Hagel crowd, suggesting satirically that the secretary’s effusive embrace of Israel and the huge new arms sale he announced (details of which are here and here) are meant to “lull Israel into a false sense of security,” which “will only make it easier” for Hagel, Obama & Co. “to fulfill their lifelong dream of ‘throwing Israel under a bus.’”

It’s a sinister plot, Shalev writes. Hagel couldn’t have changed his tune in response to the “intimidating” powers of the “Jewish lobby,” since we all know those powers are imaginary. The only other two possibilities are that he’s engaging in psychological warfare, to lower Israel’s guard—or that “Hagel’s critics were wrong.” But that last possibility, he concludes, “can’t possibly be true, because by now Hagel’s critics would have owned up to their mistake and profusely apologized, no?”

Also essential reading is this analysis of the Hagel visit by Bloomberg News columnist (and former Forward staffer) Jeffrey Goldberg (no, for the last time, he’s not me). The new weapons systems Israel is to receive, especially advanced long-distance radar systems, the KC-135 midair refueling tankers and the V-22 Osprey tilt-rotor transport aircraft (a combination helicopter and jet plane, never before sold to another country), all make it easier for Israel to attack Iran. But given Hagel’s longstanding opposition to attacking Iran, what does this sale mean? Goldberg makes two key points:

First, he says, based a conversation with a “senior Defense Department official,” Hagel’s “been awakened” to the depth of the Iranian threat by “now-daily exposure to intelligence concerning Iran’s nefarious activities around the globe.” He’s no longer the iconoclastic outsider.

Second, by visiting, expressing appreciation for Israel’s security concerns—and, of course, enhancing Israel’s ability to defend itself the way it sees fit—he increases Israeli trust in the Obama administration. And that, paradoxically, makes it easier for Israel to delay its own attack on Iran, trusting that Washington will keep its promise to act if and when the time comes.

I would add two more points. First, the new arms systems help resolve one of the three key challenges to an Israeli attack. They greatly increase Israel’s offensive range, making it easier for its jets to reach Iran and return. But they don’t give Israel the bunker-busting capacity that America possesses to break through heavily fortified Iranian nuclear installations. And they do nothing to address the need, as former Israeli national security council chief Uzi Arad explained to me last July, for an international inspections regime following an attack to ensure that Iran doesn’t turn right around and rebuild its reactors.

Thus, the new weaponry gives Israel new last-resort capacity. It extends the red line that Israel had drawn, past which it said it couldn’t wait. It can launch the attack it’s been threatening to launch at a later date than it previously said was possible. But it doesn’t solve the problems that made a solo Israeli attack a poor second choice to an American or coordinated American-European operation with a prolonged follow-up regime.

In that sense, it strengthens the hand of those within the Israeli decision-making echelons who’ve been arguing against a solo Israel attack and urging that it wait for America. It increases Israel’s ability to trust the Obama administration’s intentions. It shows that one of Israel’s leading presumed opponents in the administration, Hagel, is closer to the Israeli view than previously supposed. And it reduces the cost of delay should Israel feel in the end that it’s forced to go it alone.

Finally, it’s worth noting that despite the retirement of some of the best-known Iran moderates in the last Netanyahu government, including Dan Meridor and Benny Begin, one of the most effective moderates is now the defense minister. Moshe Yaalon has a deserved reputation as a hard-liner because of his views on the Palestinians, but they don’t carry over to his position on Iran. Now Yaalon has some new arrows in his quiver as he argues against a hasty action. And he has a new BFF in the Pentagon.