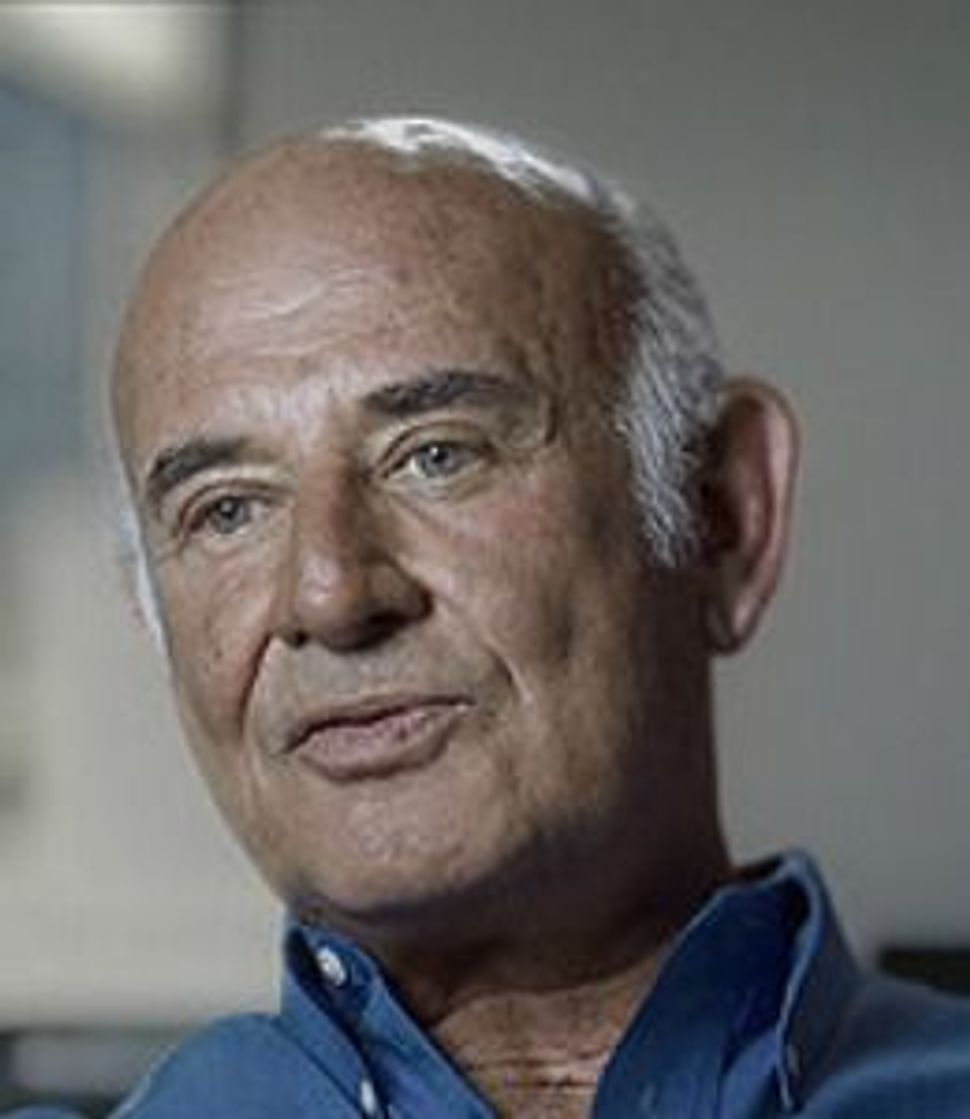 Yaakov Peri Image by “The Gatekeepers”

Israel’s state-owned Channel 1 Television aired the first part of a five-part miniseries version of “The Gatekeepers” on Sunday night. That’s the Oscar-nominated Israeli documentary in which all six living ex-directors of the Shin Bet security service criticize the government’s West Bank policies. According to Walla! News, the miniseries will include previously unseen material from the director’s hours of interviews with the six plus new documentary footage. Each segment is to be followed by live, roundtable discussions of the issues “for balance.”

Yediot Ahronot’s respected military analyst Ron Ben-Yishai, after watching the first episode, called it “even more important than the movie.” Eyal Levi of the conservative Maariv called it “required viewing.”

One thing that’s likely to result from the screening is a serious national discussion of the ex-Shin Bet leaders’ position, shared by most of the heads of the military and the Mossad, that peace with the Palestinians is achievable and within reach on terms that would make Israel more secure, not less so. Another likely outcome is an escalation of the tension that’s been growing in recent months between the security establishment and the political right.

Prime Minister Netanyahu had vowed not to see the movie when it was released this past winter. It remains to be seen whether he’ll stand firm once the miniseries airs and the rest of the country starts talking about it. Up to now, critics on the right have mostly directed their ire at the filmmaker, Dror Moreh, on the assumption that the film’s anti-occupation viewpoint can’t possibly represent the genuine opinions of all those security professionals. It’s “hardly a film that lets Shin Bet directors speak for themselves” (Alex Joffe, Jewish Ideas Daily). They were “they were manipulated by a film maker with an agenda” (Gidon Ben-zvi, Algemeiner). Moreh “should have laid greater emphasis on the swarms of suicide bombers that targeted and murdered more than 1,100 innocent Israelis during the second intifada” (Isi Leibler, Jerusalem Post). And considering the funding the government provides to Israel’s struggling film industry, “we should find a means to bring an end to the lunacy of employing Israeli taxpayer funds to promote global anti-Israeli propaganda designed to defame the nation” (Leibler again).

Once the interviews hit the small screen—on state-owned TV, noch—it won’t be possible to pretend the film’s viewpoint is leftist, anti-Israel propaganda, as opposed to standard Israeli security doctrine. The interviewees will be showing up on live television to explain themselves. I spoke to several of them in January, after I’d seen the film, and they made it clear at the time that the film fully and accurately represented their views. In fact, as former Shin Bet director Ami Ayalon told me, if the film had avoided the political question of the occupation, “there would have been no point to the film.”

Another of the interviewees, Yaakov Peri, who was elected to the Knesset with Yair Lapid’s Yesh Atid party and now serves as minister of science and technology, declared in a lengthy Yediot Ahronot interview this past Friday that he’s about to launch a major campaign to win Israeli acceptance of the Arab Peace Initiative. Peri has spent the last few months heading up the so-called Peri Committee, which was in charge of crafting new legislation to bring Haredi or ultra-Orthodox Jews into military service.

The Peri Committee wrapped up its deliberations last week. Peri’s next big project will be convincing the government to accept peace negotiations based on a modified version of the pre-1967 armistice lines and a Palestinian state with its capital in east Jerusalem. Peri said he had hoped Yesh Atid would raise the peace process during the election campaign, but the party’s American consultant, Mark Mellman, had advised against it. He said he was disappointed, but intended to raise it as a member of the peace negotiations advisory committee headed by Justice Minister Tzipi Livni. He said he knew he and party leader Lapid disagreed on Jerusalem and other issues, “but Yesh Atid is a democratic party and the issue will be clarified when it reaches the agenda.”

Coincidentally, tensions between the military and the right came to a head on another front last week when IDF chief of staff Lt. Gen. Benny Gantz locked horns with Likud-Beiteinu representatives on the powerful Knesset foreign affairs and defense committee over the army’s rules of engagement with Palestinian rock-throwers. Recent months have seen a wave of rock-throwing and arson directed at settler homes and vehicles. In one incident in March the rocks allegedly caused a car to crash, critically injuring a toddler. Settlers have repeatedly marched and protested and in some cases retaliated in kind, but much of the anger has been directed at the military for what settler leaders see as excessive leniency. Most of the criticism has been directed at the chief of Central Command, Brig. Gen. Nitzan Alon, a longtime settler target because of his reputedly liberal views. But Gantz, who appointed Alon to the post, has stood by him and made it clear that the don’t-shoot orders come from the top.

Last Tuesday in the Knesset Gantz faced grilling and criticism from foreign affairs and defense committee chair Avigdor Lieberman and former Knesset speaker Reuven Rivlin for a policy that they charged amounted to fleeing rather than confronting. Gantz replied that responding to rock throwing with live fire would escalate the tension into a regional conflagration, which touched off a new round of criticism from the right.

Thus the miniseries version of “The Gatekeepers” opens in an already combustible atmosphere.