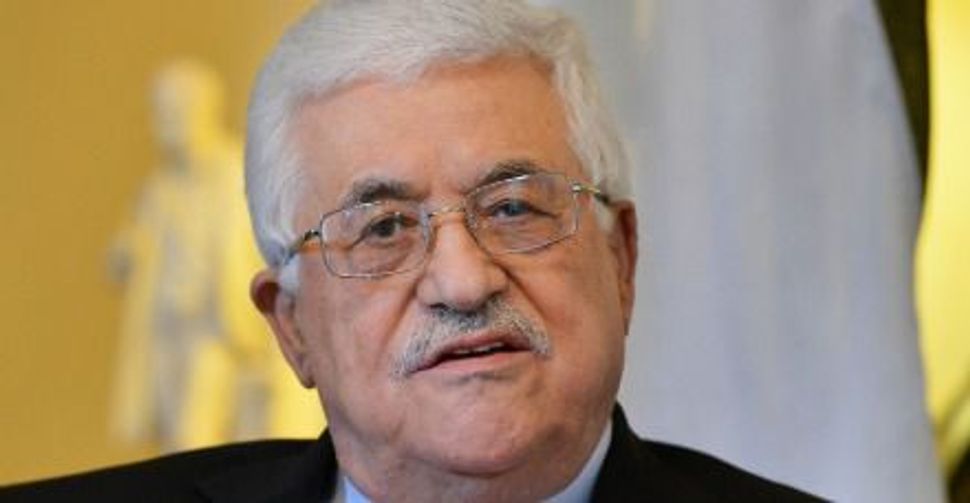 Palestinian leader Mahmoud Abbas met with a group of prominent American Jews in New York Monday evening for a dialogue over a dinner of trout and saffron rice. Also on the menu were servings of hope, flattery, mutual frustration and a just soupcon of evident peace-process exhaustion and perhaps a hint of unstated despair.

Abbas, in New York to address the United Nations General Assembly, seemed intent on driving home his views on peace, which Palestinians claim are frequently misrepresented by Israelis. He repeatedly condemned the recent murders of Israeli soldiers in the West Bank, declared himself committed to a “two-state solution” with Israel and “the state of Palestine” living “side by side in security and peace,” and he insisted that “70% of Palestinians” share that goal.

And, in a seeming rebuke to persistent Israeli and Western skepticism, he stated several times that his goal in negotiations is a “comprehensive agreement with Israel that will end the conflict and end further claims” by the two sides against one another. Pro-Israel analysts commonly claim that the Palestinian leader has no intention of agreeing to a final end to the conflict and cannot agree to sign a deal ending all further claims against Israel.

The 30-odd Americans in attendance, mostly liberal activists, peppered him with questions about how he planned to convince Israelis of his sincerity, at times seemingly wanting to be convinced themselves. Of 13 guests who were called on to ask questions, no fewer than six asked him bluntly to use the U.N. pulpit to reach out to Israelis, to let Israelis “hear words of hope from you,” to “dispel the pessimism” plaguing the diplomatic process and “make clear that you are a partner for peace.”

Abbas’s replies to each were variations on “no”: “I don’t think the Israelis need to be convinced that two states are good for them—they want their state and we want our state.” And: “My speech will be addressed to the Palestinian people and the Israeli people at the same time, but when we talk we don’t have double language.” And, after being asked the same question a sixth time: “It’s not my job alone to dispel pessimism — we both have to work, both me and Mr. Netanyahu.”

To numerous guests chatting among themselves afterward, the most notable feature of the dinner was who wasn’t there. The Abbas dinner has become something of an annual September ritual when the Palestinian leader comes to address the General Assembly. It’s organized each year by the S. Daniel Abraham Center for Middle East Peace, which is named for the Slim-Fast diet food mogul who founded it and is headed by former Florida Rep. Robert Wexler. In past years guests have included heads of the Anti-Defamation League, American Jewish Committee, Conference of Presidents, Jewish Council for Public Affairs, the main synagogue unions and others.

This year the organizational leaders present were limited to heads of the Union for Reform Judaism, the National Council of Jewish Women and a roster of peace organizations: Israel Policy Forum, J Street, Americans for Peace Now, One Voice and the Abraham Center itself. In effect, Abbas was preaching to the choir. And yet even the choir needed convincing, or so it seemed. One former Clinton administration jibed afterward (on condition of anonymity): “I wish somebody could have asked him why nobody believes him.”

Last year Netanyahu’s office discouraged organizational leaders from attending, because talks were frozen and Jerusalem saw the meeting as an attempted Palestinian end-run around Israel’s government. As a result, only 15 or so persons were present.

Wexler told me the heads of the centrist organizations who had attended in the past had been personally invited to attend this year but had begged off with a variety of prior scheduling commitments. He said it would be a “mistake” to read any pattern of deliberate avoidance into their absence.

Several participants in last year’s meeting said the repeated pleas to Abbas to tailor his U.N. speech for Israeli ears were partly a result of last year’s meeting. At that time, Abbas was reassuring in his meeting with Jewish figures, but went on to deliver a slashingly hostile speech at the U.N. (text, news account). Among other things, Abbas accused Israel in his 2012 speech of “ethnic cleansing” in Jerusalem, of “murder, torture and abuse of peaceful civilians” and creating a “racist climate fueled by a culture of incitement” in its school curriculum. The speech caused outrage in Jerusalem, New York and Washington.

This year, despite Abbas’s repeated deflecting of appeals to temper his speech, several Americans who have spoken with Abbas’s aides this week said the Palestinians had assured them that they “will be happy” with the speech. He’s scheduled to address the assembly on Thursday, September 26.