Another Way To Join the Jewish People? 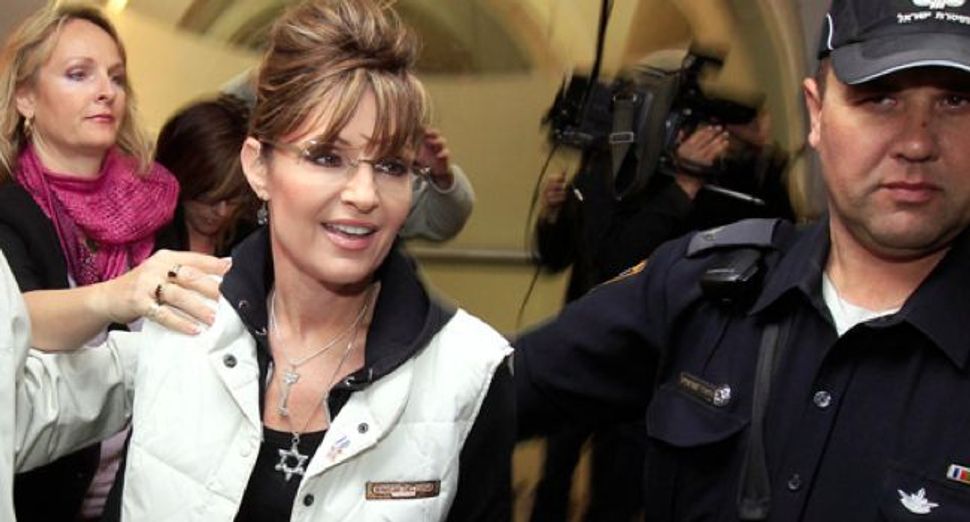 A Joiner: Non-Jews like Sarah Palin sometimes wear Jewish stars as a sign of affection for the Jewish people. Image by Getty Images

Almost two weeks ago, the two of us proposed that Jewish communities consider instituting an alternative pathway to joining the Jewish People. As the Jewish Community Study of New York: 2011 demonstrated, thousands of Americans – many married to Jews, many with Jewish children and grandchildren, and many with Jewish friends – have already chosen to identify as Jews without converting. Though not raised Jewish, these people – amounting to 5% of the adult Jewish respondents in the New York study – affirm their sense of Jewish belonging without necessarily taking on a Jewish religious identity. In contrast, those who have undergone conversion constitute barely 2% of the respondents in the study.

We believe this already widespread phenomenon merits encouragement and enrichment. Not only do we wish that more people embrace being Jewish, we seek to deepen their Jewish identification by their encountering the full breadth of Jewish civilization – history, literature, politics, music, Israel, communal life, social action, acts of caring, and, yes, holidays, congregations, sacred texts, and ritual practice. For those who would prefer not (yet?) to acquire a Jewish religious identity but still want a Jewish social/cultural identity, they could undergo what we tentatively called, “Jewish Cultural Affirmation.”

We believe that some prospective converts to Judaism feel that religious conversion demands what, for them, would be an insincere affirmation of religious faith. Perhaps they are agnostic or atheist or secular, or even committed to another faith tradition. As a result, many would-be members of the Jewish People have no possibility of engaging in a course of study and socialization leading to public recognition of their having joined the Jewish People, and they have limited access to enriching their familiarity with “lived Judaism,” the actual culture and ethos of Jewish life as lived in families and communities.

“Jewish Cultural Affirmation” would be clearly distinguished from Jewish religious conversion, which remains a rabbinic prerogative ; but while “non-religious,” JCA would not at all assume an “anti-religious” ethos. Nor are we suggesting that JCA undermine or obviate the traditional path to conversion. Rather, by offering an additional vehicle to acquiring a Jewish social identity, Jewish Cultural Affirmation would allow prospective candidates to acquire a measure of familiarity with being Jewish, and undergo a non-religious pathway to recognized belonging to the Jewish People.

Now, many rabbis and religiously committed Jews find our proposal troubling because they regard religious commitment as absolutely essential to Jewish identity. We certainly understand and even sympathize with that position, which is one reason why we distinguish religious conversion from Jewish Cultural Affirmation. At the same time, we know that major segments of the American Jewish population exhibit little religious commitment and even go so far to say as they have no religion. Why shouldn’t newcomers to the Jewish People have the same option? As Yossi Beilin of Israel once asked, “Why should an agnostic Gentile need to go to a rabbi to become an agnostic Jew?”

Now, along comes Rabbi Andy Bachman – whom we hold in very high esteem – and he dismisses the need for Jewish Cultural Affirmation with the curious argument that he already converts people to Judaism even if they “don’t believe in God” or are “ambivalent about religion or God.” To which we have a few questions that are especially pertinent to people who want to join the Jewish group (or family, or community, or People, or some of the above), but have an aversion to God and to religion.

First, how many rabbis do, in fact, convert those of other religious, ethnic and cultural backgrounds who don’t believe in God and/or do not want to assume a religion, Judaism or otherwise? Our personal experience is that Rabbi Bachman is in the rabbinic minority.

Second, assuming that rabbis with views as, well, un-orthodox like Rabbi Bachman, how many potential converts (and their Jewish family members) know that agnosticism or atheism are no barrier to conversion?

Third, how would Rabbi Bachman answer the follow would-be member of the Jewish People: “Rabbi, I would like to join the Jewish community, to let our children know that both their parents are Jewish. But, I’m really a secular person – I don’t believe in God, or religion, or see the holidays or rituals as religious in nature. For me they’re historical, cultural, or political – but just not religious. And, from what I read in the Pew report, lots of American Jews say they have no religion; and most of the rest say that being Jewish is mostly a matter of ancestry or culture.

“I want to be a Jew like lots of Israeli and Russian Jews. I’m sure my spouse/family will accept me as such, and begin to see our intermarriage as an in-marriage.

“To me being Jewish is about family, and ethics, and community, and Israel, and holidays, and politics, and literature, and all that – and not about religion, or God, or prayer, or synagogues. I’m not at all asking you to convert me to Judaism. I just want to be Jewish by cultural affirmation, following a period of study and Jewish experiences. Why is that wrong?”

Another Way To Join the Jewish People?