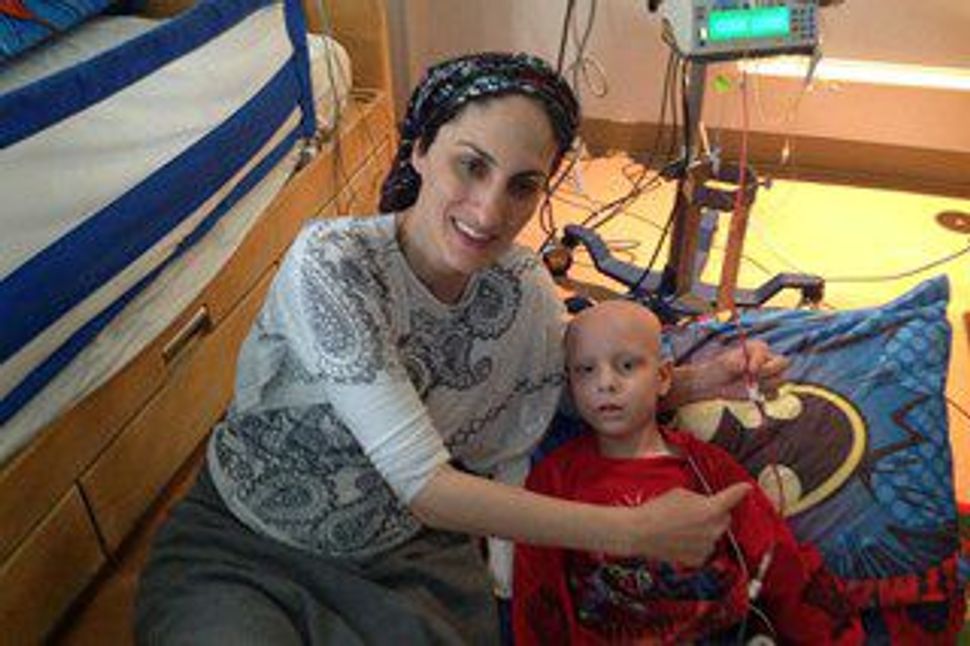 Raphael Elisha with his mother Devorah Cohen. Image by youcaring.com

Rabbi Yaakov and Devorah Cohen have run out of medical options to save their six-year-old son Raphael Elisha, who suffers from a malignant brain and spine cancer.

Desperate to save their son, the Cohens have turned to the internet. The couple posted a petition which asks the FDA to authorize a compassionate exemption so their son can undergo an experimental treatment that the government has shut down research on. Over 40,000 people have signed the petition since it was posted to the White House website on December 3.

“The fact that people are so concerned is really heartwarming and really the greatest sense of comfort that this family can get at this difficult time,” said Rabbi Aryeh Wolbe, executive director of TORCH, a Houston-based Jewish outreach program run by Orthodox educators which has employed the Cohens for the past two years.

Online supporters have donated over $74,000 to assist the Cohens through youcaring.com, a fundraising website.

“Money is coming in from all over the country and it’s not just [from] Orthodox Jews,” said Randy Barnes, a friend of the Cohens, who has spearheaded the fundraising efforts. “The story is starting to go viral.”

Money raised on the site is primarily used to cover Raphael Elisha’s mounting medical costs, many of which are not covered by insurance. The boy’s health is deteriorating and he cannot walk or swallow.

The Cohens also have five other children, which the funds have helped support. “We want them to be focused on helping Raphael Elisha and not have to worry about how is rent going to be paid,” Barnes said.

The Cohen’s petition to the FDA still needs almost 60,000 signatures before it reaches the 100,000 threshold required for a response from the federal government. Even if that happens, the likelihood of the FDA being willing to assist is quite low, according to Yaakov Cohen.

Antineoplaston therapy, the treatment for which the Cohens are petitioning the FDA, is an unproven cancer treatment called “snake oil” by its critics and praised as a last resort by its supporters. The controversial Burzynski Clinic, which administers the drug, has been barred by the FDA from continuing its clinical trial due to serious safety and ethical concerns.

“The family is aware of the controversy surrounding the clinic,” Barnes said. “However, they believe that this could be Raphael Elisha’s only hope.”

Sadly, the Cohens are not the first to turn to the internet for help for a sick child. A year ago, the story of Ayelet Galena, a two-year old Jewish girl who struggled with and died from a bone marrow disease drew national attention. A blog about Ayelet run by her parents drew 14,000 visitors each day, most of whom had never met the girl.

“On an almost daily basis, I receive a notification on email or on Facebook about a different family’s story that I am following,” said Hindy Poupka, Ayelet’s mother. “I am not sure if it is unique to the Jewish world, but families with sick children are increasingly turning to social media for support. At times, that support is quite practical.”

For now, Yaakov Cohen is asking for spiritual support. “Now we just pray – that’s what we need,” he said. “He’s a loving sweet little kid who is going through something that nobody should ever go through.”