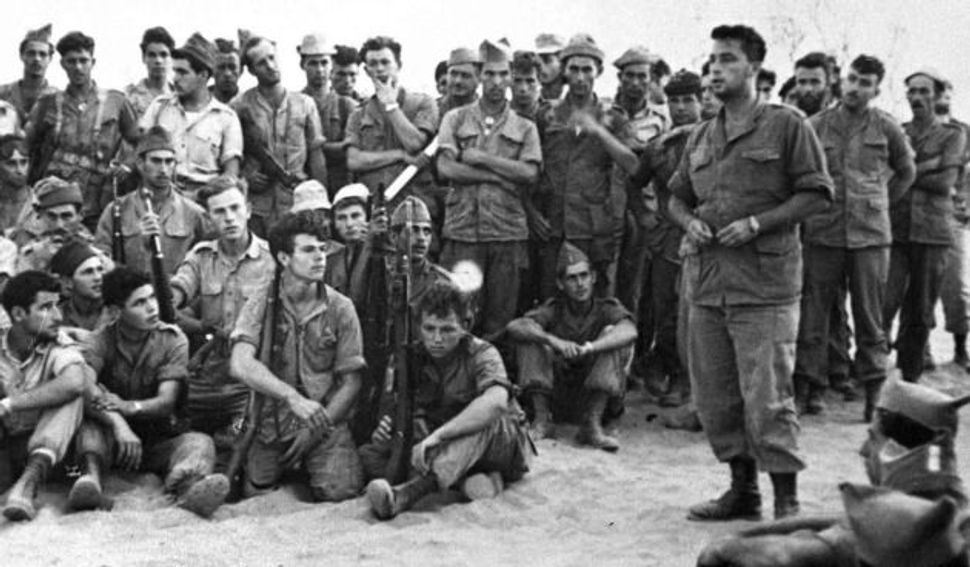 Ariel Sharon in Knesset, preparing his speech for opening of summer session, May 7, 2001 / Getty Images

Amid the outpouring of tributes to Ariel Sharon following his death, a few seem particularly noteworthy for their unexpected insights — some into the life and character of Sharon, others into the character of the writers.

Chemi Shalev writes in Haaretz about the first time he met Sharon, serendipitously bumping into him at Southern Command headquarters in Sinai one evening during the Yom Kippur War in 1973. Chemi was a 20-year-old enlisted man. Sharon was already the legendary, notorious General Bulldozer. When Sharon saw young soldier Shalev gaping at him from a distance, he invited him over to share some food, cooked by his personal chef. Chemi was surprised by Sharon’s enormous personal charm, which seems to have contradicted the man’s fearsome reputation. Over the years, Chemi writes, it is Sharon’s gargantuan contradictions that stand out as the defining characteristics of the man. The piece is well worth reading in full.

Another story comes from the late David Twersky, who wrote in the New York Sun at the time of Sharon’s stroke in 2006 about the first time he had met the old general. It was in the early 1990s, about a decade after Sharon’s Lebanon War, in which David had served as a gunner in an artillery unit outside Beirut and come away with a profound disliking for Sharon. On this particular day Sharon was dropping by the Forward’s offices in New York to visit his old friend Seth Lipsky, our founding editor (and later editor of the Sun). David, then the paper’s Washington bureau chief, was summoned to New York to sit in. Like Chemi, David was struck by Sharon’s personal magnetism, and began to find that while he “remained critical of many of his policies,” the “rancor was gone.”

Now, though, with Sharon felled by a stroke, David wrote that he was “beside myself with sadness at the prospect that Mr. Sharon will no longer be leading Israel and full of trepidation over what will come next.” He saw in Sharon a rare ability for decisive leadership that made him “this generation’s David Ben Gurion.” Like BG, Sharon had the courage to stand up to his own comrades when it became necessary by “doing to the settler movement what Ben Gurion had done to the leftist Palmach militia, disbanding it in the interest of the state.” And when Sharon formed his Kadima party in 2005,

The Israeli columnist Nahum Barnea had only half in jest suggested that the new party be named Rashi (after the famous rabbinic commentator on the Bible and Talmud) as an acronym for Rak Sharon Yachol – Only Sharon Can.

Two more items that are particularly telling, both from Israeli settlers in the renewed Jewish quarter of Hebron. The authors are prominent leaders of that subsector of Israelis who benefited more than any other single segment of Israeli society from Sharon’s actions, namely West Bank settlers. One is from a Knesset member who wrote this weekend, after Sharon’s death, to express thanks to God that Sharon had been felled by a stroke before he could carry out any further withdrawals from settlements. The other is from a spokesman for the Hebron community who calls Sharon a “monster” and expresses confidence that he is damned to eternal suffering for his sins.

The first is a news report from The Times of Israel about Orit Struck, a Jewish Home party Knesset member and a prominent figure in the Hebron community. She wrote on Facebook after learning Saturday of Sharon’s death that it was “impossible not to thank the lord almighty” for Sharon’s 2006 stroke, by which he was “taken from public life” before he could do more damage after what he’d done to the settlers in Gaza. (She later clarified, the paper writes, that she hadn’t actually prayed for him to be cut down—she was merely glad that it happened.)

The other is an essay by David Wilder, the longtime spokesman of the Hebron community, written after Sharon’s sudden decline last week but a few days before his death. He expresses solemn satisfaction that Sharon had suffered for a long time before his well-deserved death. He predicts that Benjamin Netanyahu will suffer a similar fate if he continues to cooperate with the “defilement of body and soul” that is John Kerry. Note to those conservatives who are outraged by liberals who remember Sharon with anything less than reverence: This piece was published in the Jewish Press of Brooklyn, the settler-run Arutz Sheva-Israel National News and the Jerusalem Post. Yeah, those nasty leftists…

Ariel Sharon is dying. It’s not considered nice to say bad things about dead people, especially immediately after their passing. So I’m writing this while he’s still alive. Barely.

When I heard the news I wasn’t sure if I wanted to laugh or cry. Laugh, that finally, he’s leaving us. Or cry, because his ‘this world’ suffering is coming to an end.

That’s how much I like Ariel Sharon. He had many positions, and many titles. I will remember him as a monster. …

After recounting Sharon’s sins—failing to stop the terrorism of the Second Intifada the moment he entered office in 2001. “He was Prime Minister when most of the over 1,500 people murdered during that war. He could have stopped it. He didn’t.” But, Wilder writes, “that was just the beginning.” Then he went on to withdraw Israeli troops and settlers from Gaza, or “the southern tip of Israel,” as Wilder calls it.

What then is the punishment of people who remove cities from Israel, abandoning the land, expelling the people, endangering the population?

What happened to them, what was their fate: Begin, the hero of Jewish underground, the leader who destroyed the Iraqi nuclear threat, secluded himself for years following his resignation as Prime Minister, unseen until his dying day. Rabin was assassinated. Olmert, one of the primary initiators of the Gush Katif catastrophe, has undergone numerous trials on charges of corruption, facing disgrace. Katzav, who as President refused to oppose the Gush Katif expulsion, imprisoned following conviction for rape, from the president’s mansion to a jail cell. Ariel Sharon, suffering the worst kind of hell, neither here nor there, not dead, not alive, for the past eight years. Some 8,600 people were expelled from the Gush, a year for every thousand people. And one can only image what he will face when trying to enter the pearly gates of heaven.