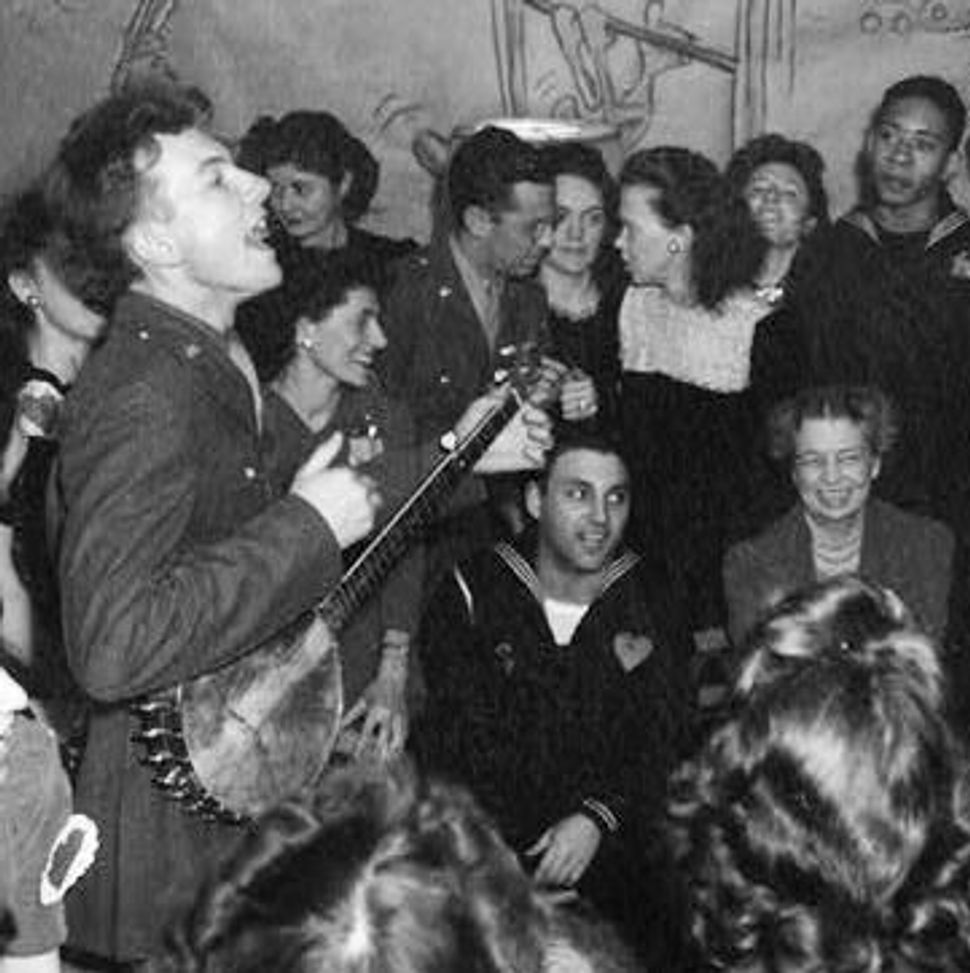 As you’ll recall, Part 1 took us through Magid, the Seder narrative, and up to the meal. Part 2 opens with Jon Stewart hosting Jason Bateman, a self-described “goy” who attended his first Seder and describes it to Stewart with a sense of wonder.

(It should be noted that Jon Stewart acknowledged after the break that he’d been wrong about the word chazerai, which has nothing to do with chazir and does indeed mean, as Bateman said, Tchotchkes, flotsam or junk.)

After the meal, of course, comes Birkat Hamazon, the blessing after the meal. Here are two of them.

The first picks up the spirit of the traditional Birkat Hamazon, giving thanks for the land and its bounty, inch by inch and row by row. Some people think the best way to hear “The Garden Song” is from the guy who wrote it, David Mallett. It’s fine, but I don’t think anyone will ever match Arlo Guthrie’s madcap rendition:

The second way to give thanks is in the spirit of the Israeli pioneers, via Chaim Nachman Bialik’s Shir Ha’avoda Vehamelacha, “The Song of Work and Labor” (“Who will save us from hunger? Who will feed us bread and pour us a glass of milk? O, who gets our thanks, our blessing? Work and labor!”) Sung here by the 1980s supergroup Kolot Shluvim, featuring (front row and top left) Gidi Gov, Yitzhak Klapter and Alon Oleartchik, all of Poogy fame; plus Shlomo Gronich, Yehudit Ravitz and Ariel Zilber. Also worth watching: a wonderful clip from 1937 of the song’s composer, Nachum Nardi, accompanying his first wife Bracha Tsfira as she sings “Shir Ha’avoda Vehamelacha.”

After drinking the third cup of wine, we open the door for Elijah the Prophet, hoping he’ll come this year to herald the messianic era. Here’s the Vienna Jewish Choir, conducted by Roman Grinberg, with a fine version of the prophet’s traditional song.

Bob Dylan laid out his messianic vision of the time of liberation: “The Hour That the Ship Comes In,” with Joan Baez at the 1963 March on Washington for Jobs and Freedom. (I’ve uploaded this before. I’ll keep doing it until it hits No. 1.)

Next comes the holiday cycle of readings from Psalms, known as Hallel. Since it’s getting late, we’ll run through it with a single song that captures all the main themes of the Hallel in just a few lines. It’s the 1942 pop tune “Praise the Lord and Pass the Ammunition,” words and music by Frank Loesser (“Guys and Dolls,” “How to Succeed in Business”), who donated all the royalties to the war effort. This 1943 version, by Kay Kyser (of College of Musical Knowledge Fame) and His Orchestra, hit No. 1.

If there was any justice, this version by the Southern Sons Quartet should have gone to No. 1, but there’s isn’t and it didn’t.

Chad Gadya, as reimagined by Chava Alberstein on her 2006 album “London”: “On all other nights I asked only 4 questions. On this night I have another question: How long will the cycle of terror be continued? Chase and be chased, beat and be beaten, when will this horror end?” It was banned on Army Radio. Here are the lyrics, in Hebrew and English.

Echad Mi Yodea (“Who Knows One?) is in a long line of counting songs. Probably the most familiar example to the American ear is the old English Christmas song, “The 12 Days of Christmas.” Here’s a wonderful little adaptation, “The 8 Nights of Passover.”

Finally, before we leave the subject of numbers, here’s a handy little math lesson from Bud Abbott and Lou Costello:

The Seder ends with the words, “Le-shana ha-ba’a b’Yerushalayim” — “Next year in Jerusalem.” For centuries it was just a wish. Paul Simon captures that traditional mournful yearning and sings of how she “weeps alone” and “calls my name” in “Silent Eyes (Jerusalem),” from his 1975 “Still Crazy After All These Years” album.

In May 1967, Naomi Shemer wrote what became the classic song of longing for Jerusalem for the annual Israel Song Festival. The ethereal, pitch-perfect performance by Shuli Nathan became a monster hit. (Here are the words in Hebrew and English.) A few weeks later, the Six-Day War brought Israelis back to the Old City and the Western Wall. The song has been magic ever since. Here’s the original performance by Shuli Nathan:

For an even more ethereal version, if that’s possible, try this one by Phish. That’s right, Phish. Singing “Jerusalem of Gold.” In Hebrew.

Shortly after the war, the kibbutznik folksinger (and onetime Habonim shaliach) Meir Ariel wrote a takeoff, “Yerushalayim Shel Barzel” (Jerusalem of Iron), that tells his hard-edged story of Jerusalem’s reunification — the stench of gunpowder, the grieving mothers — and asks whether stone walls are what’s meant by freedom. It made him a star.

Two takes on the vow in Psalm 137, “If I forget thee, O Jerusalem,” written along the banks of the rivers of Babylon, the Tigris and Euphrates, way back when it was still a decent neighborhood and you could still walk around at night. First, by Matisyahu. (If you have a hard time following his faux Jamaican accent, (this version has the words on screen.)

Second, by the Melodians, who really do come from Jamaica. “By the Rivers of Babylon,” their biggest hit, first came out in 1970 and was popularized in the 1972 Jimmy Cliff film “The Harder They Come.” By the way, the song is a Rastafarian hymn, reflecting the belief in Ethiopia as the African Zion and the redeemer who will bring the faithful back home, King Haile Selassie, known by his birth name Ras Tafari Mekonnen (Hence “Rastafarian” – Ras means leader or head, as in Rosh). He’s often referred to as King Alpha. Hence “How can we sing King Alpha’s song?” and the closing words: “… be acceptable in thy sight, O Fari.”

Yearning for Jerusalem is a pretty widespread sentiment. There are so many versions of “12 Gates to the City” that it’s hard to know where to begin. This one by Blind Reverend Gary Davis is a classic, but this one by James Taylor has (despite an awkward opening) a great gospel spirit and stirring visuals.