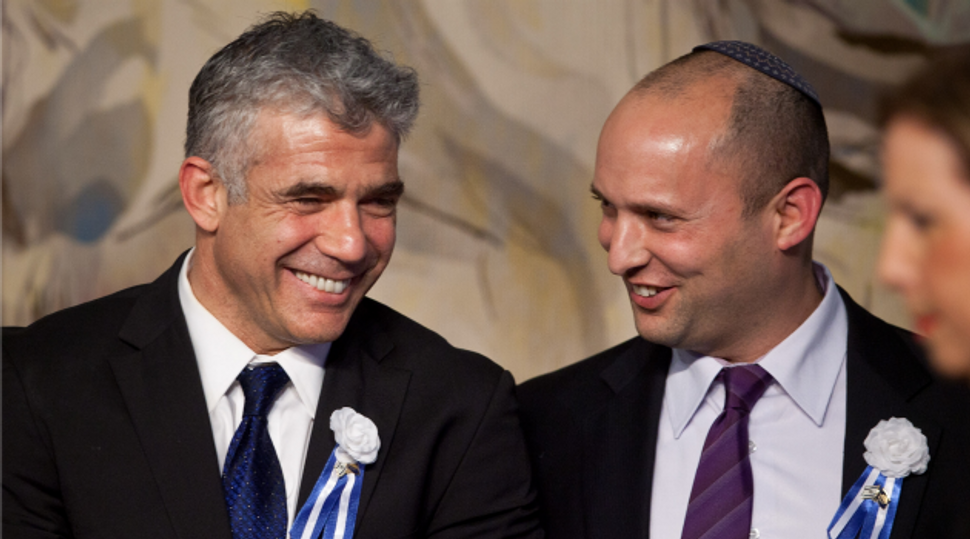 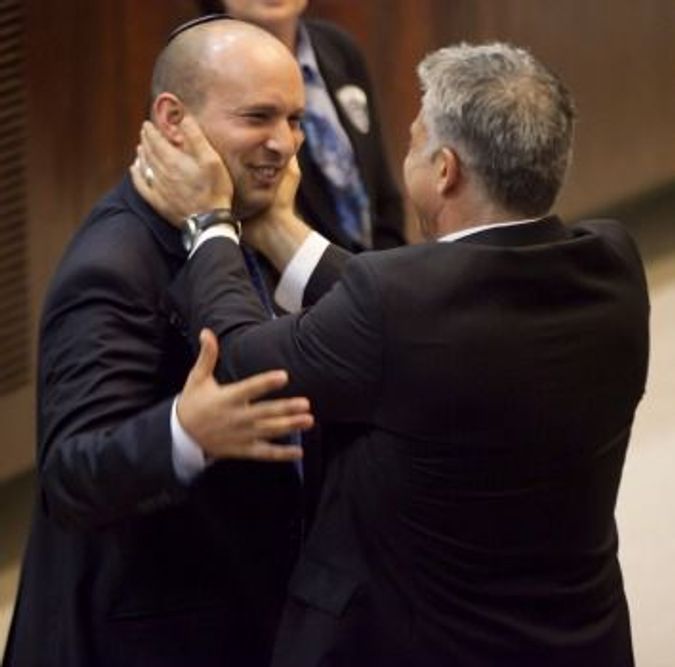 Israel gave the world an unusually raw look at its internal divisions this week when the annual Herzliya Security Conference, traditionally the top showcase for the country’s defense doctrines, turned into an extended food fight.

By the end of Day 2 of the three-day gabfest, angry exchanges of retorts and threats had broken out on the main stage among ministers in the Israeli cabinet and between leading Israeli and American defense experts.

More subtle, but arguably more significant, were dueling assessments of the threats facing Israel — on one side, a united front of government spokesmen, and on the other, the uniformed generals who had been asked to present their professional assessments. Government spokesmen presented the Iranian threat as pressing and mortal, while the generals presented it as part of a larger and clearly manageable range of challenges in the region.

Government spokesmen presented the Palestinian Authority as an ongoing threat with no peace solution in sight, particularly given Hamas’s unalterable commitment to attacking Israel. The generals said Hamas had been effectively deterred from attacking Israel — “they’ve learned the price of attacking us,” chief of staff Benny Gantz said laconically — and made no mention whatever of the Palestinian Authority or the peace process.

“They’re soldiers. They didn’t want to stick their necks out by giving their views,” legal scholar and former education minister (and conference staffer) Amnon Rubinstein told me.

The exchange among the ministers drew the most media attention. In a Sunday evening session featuring the heads of Israel’s main political parties, finance minister Yair Lapid and justice minister Tzipi Livni both threatened to quit the government if it decided to begin annexing West Bank territory, as demanded by economics minister Naftali Bennett, who was sandwiched between them. Also appearing was opposition leader Yitzhak Herzog of Labor, who mocked Lapid and Livni for remaining in a government that was building settlement units they oppose, and told Lapid he “should have thought about peace before you dragged your ‘brother’ Bennett into the coalition.”

Lapid also blamed Israel — presumably meaning Prime Minister Netanyahu — for the current “unprecedented crisis” in Israeli-U.S. relations. And he demanded that the government present a map of its desired borders and begin staged withdrawals accompanied by negotiations. That drew a sarcastic retort in Knesset the next day from Netanyahu, who called Lapid “naïve” and “inexperienced.”

The American-Israeli confrontation came earlier in the program and caused some gasps in the audience. It came during a panel discussion on “regional and global threats” featuring American and Israeli defense experts.

Among them were Anthony Cordesman of the Center for Strategic and International Studies, a longtime Washington fixture and former defense aide to Senator John McCain, and Yaakov Amidror of the Begin-Sadat Center at Bar-Ilan University, former national security adviser to Prime Minister Netanyahu and onetime head of research in Israel’s military intelligence.

Cordesman gave a wide-ranging scan that included strong warnings about Chinese intentions and mild rebukes of presidents Obama and Bush — one who “likes theory better than execution” and his predecessor who “liked execution better than planning.” As for Iran, he said its military was a “museum,” armed with equipment dating back to the 1970s. “You can’t compare U.S. threats in the Middle East and Asia,” he said, indicating that Asia was a far more pressing threat.

Amidror’s talk, by contrast, was a presentation of implacable dangers surrounding Israel that was so unrelentingly dark — “any agreement with Iran” can’t be counted on; “the Arab and Muslim states are a monolithic anti-Israel bloc” — that when he was done, session moderator Tali Lipkin-Shahak aske if it was “safe to come out of our shelters now,” drawing chuckles from everyone on stage except Amidror.

But after the other presentations — including U.S. strategist Edward Luttwak and former Israeli ambassador Michael Oren — the speakers were invited to respond to each other. Cordesman looked at Amidror and said:

The dispute between the politicians and the military was more subtle, and seemed to go unnoticed by much of the crowd. It wasn’t a frontal confrontation, but rather a marked difference in outlooks. Speakers representing Netanyahu’s point of view — Amidror, Oren, intelligence affairs minister Yuval Steinitz and others — spoke at great length throughout the conference about the mortal threat Israel faces from Iran’s nuclear plans and the fear that America and the West would accept a negotiated agreement that left Iran with any ability to enrich uranium to bomb strength. Several also spoke at length about the failure of the Palestinian peace process, which they uniformly blamed on the Palestinians’ unwillingness to accept Israel’s existence.

The two military leaders invited to present their global scans were chief of staff Benny Gantz and the chief of research in military intelligence, Itai Brun. Both gave detailed analyses of every potential front Israel faces, from jihadist militants in Sinai to Hezbollah rockets, unrest in neighboring Arab states, Syrian chaos and Iran, both as a force on its own and as a lynchpin in what they called the “radical axis.” Gantz spoke in broad terms about alliances, capabilities and intentions, while Brun focused mainly on weaponry. Both distinguished the relatively stability of the moderate Arab states — Saudi Arabia, the Gulf States, Egypt, Jordan — from “radical” Iran and its allies, “jihadists” and the troublesome but manageable Muslim Brotherhood.

Strikingly, both made virtually no mention of the Palestinians. Gantz said there are “local incidents in Judea and Samaria” and left it at that. Brun never mentioned the West Bank or the Palestinian Authority at all. As for Hamas, Brun said it “remains committed to maintaining the calm.” Gantz said it “has learned the price of attacking us. Deterrence works against state-like entities,” like Hamas and Hezbollah, as opposed to roving, unattached bands of jihadis.

Both depicted Iran as a manageable problem. Brun said that in Iran the “Rouhani era represents a struggle for the nature of the state.” He depicted the recently elected president as “trying to strengthen the civilian establishment over the military, with partial success.”

We believe the vision of Iran to achieve nuclear weapons will remain. Whether they can achieve it depends on the nature of the agreement.

Gantz said that in Iran “we need to prevent it from getting a nuclear weapon or having the capability to get one in a short time,” a subtle difference but important difference from Netanyahu’s repeated insistence on preventing such capability at all.

It’s possible to reach a situation where Iran doesn’t have that capability, militarily or not. We’d prefer not.

It’s worth noting that Steinitz, speaking after Gantz, said Iran should be forced to give up “most” of its centrifuges so that it is at least “a year” away from weapon readiness, a break from Netanyahu’s consistent “no nuclear capability” position that may have come in reaction to Gantz.

The exchange among ministers drew the most attention outside the conference hall. It happened during a Sunday evening session featuring the heads of three coalition parties, finance minister Yair Lapid of Yesh Atid, economics minister Naftali Bennett of Bayit Yehudi-Jewish Home and justice minister Tzipi Livni of Hatnuah, along with opposition Labor leader Herzog.

Lapid opened up the evening program by accusing the prime minister, who wasn’t present, of causing an “unnecessary confrontation with America” that crippled Israel’s ability to “explain our situation to the world.” He went on to insist that Israel must present a map of the borders it seeks and laid out a staged process for withdrawing from its least desired areas, negotiating with the Palestinians over its border aims and then negotiating “core issues,” meaning Jerusalem and refugees.

Israel’s failure to present a map of what it seeks is a key complaint of Palestinian negotiators.

Then, in an apparent response to recent proposals from Bennett (who had a given out a glossy printed proannexation booklet before the session), Lapid declared that “if there is an attempt to annex even one settlement, Yesh Atid will not only quit the government but we’ll topple the government.” He concluded by repeating his accusation about Israel-U.S. relations: “We are in an unprecedented crisis in our relations with the United States, and it’s due to irresponsible behavior on our side.”

He was followed directly by Bennett, who began by declaring that “the world is in a period of moral fog,” and that Israel should be a beacon of morality by refusing to release prisoners in the context of negotiations. A bill to that effect is currently before the Knesset. He then laid out his annexation plan, which he calls his “sovereignty plan,” for extending Israeli sovereignty step-by-step over the entire West Bank territory. Currently the area is under military rule but not part of Israel under Israeli law. He said in the long term Palestinians could have limited independence in their population centers. He said “the world” would “say we don’t recognize your sovereignty,” but “so what?” He added: “The world will get used to it when it sees through its blindness.”

He was followed by Livni, who seconded much of what Lapid had said in angry, passionate tones that drew applause from the audience. “We need to clear aside all the background noise about is there or isn’t there a partner — all that can be addressed after we have established our own vision.”

She went on to echo Lapid’s threat: “There will not be a government with my participation that annexes. I heard Lapid. Let the government understand.”

She concluded with an indirect dig at Bennett’s annexationist plan: “Judge it [the Palestinian government] by its actions, just as the world judges us by our government’s decisions and not by the platforms of its constituent parties.”