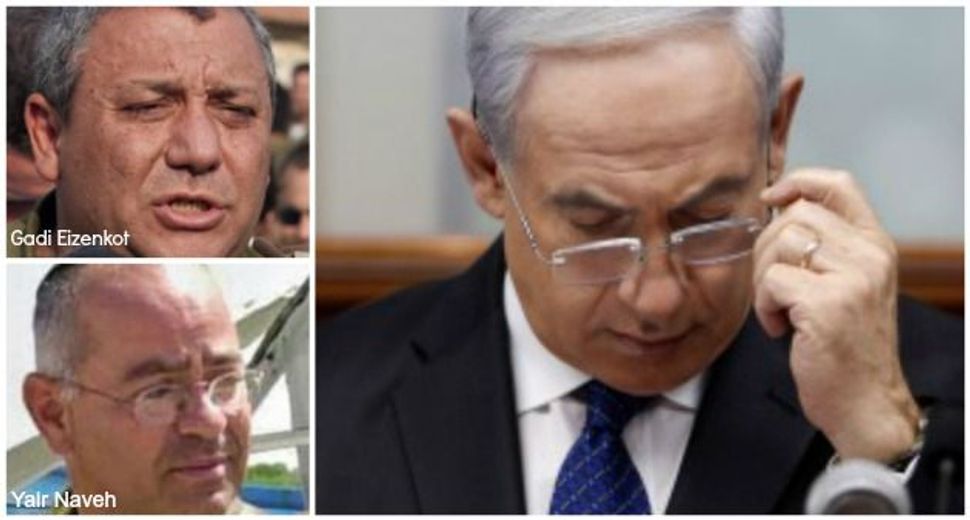 By law the nomination of a new chief of staff is the job of the defense minister. He’s supposed to present his choice to the cabinet for approval three months before the incumbent’s term ends. That deadline was November 15. Since then, though, Netanyahu has twice asked for delays so he could interview the candidates, most recently last Friday. He’s now asked to meet with the defense minister, Moshe Yaalon, before a name is presented to the cabinet.

Yaalon has stated publicly that his preference is the current deputy chief of staff, Gadi Eizenkot, who is also the unanimous choice of the top generals who make up the General Staff. The other nominee is Yair Naveh, a former deputy chief of staff who retired two years ago.

Suspicions are running high within the senior military command, according reporter Noam Amir in the right-wing Maariv, that Netanyahu is deliberately trying to sideline Eizenkot despite his support from the IDF and the defense minister. Officers tell Amir that if Eizenkot isn’t appointed there will be an “earthquake.” Cohen in Haaretz reports speculation that Netanyahu is weighing in to avoid accusations later that he failed to pay attention, as some accused him of doing in 2010 and in a previous round in 1998.

Eizenkot is identified with the mainstream IDF defense doctrine that favors minimum necessary use of force and activist pursuit of diplomacy to settle disputes. Naveh is an Orthodox Jew and identified with the political right, though he’s clashed with the settler movement in the past over his refusal to disobey orders involving dismantling settlements, including the 2005 disengagement from Gaza.

In some ways the current competition seems like a rerun of the scandal-ridden contest in 2010. Eizenkot, then chief of Northern Command (overseeing the Lebanon front), was the favorite of the IDF senior command, particularly then-chief of staff Gabi Ashkenazi. Netanyahu and then-defense minister Ehud Barak favored the chief of Southern Command (overseeing the Gaza front), Yoav Galant.

That competition turned explosive when officers close to Ashkenazi were revealed to be conducting a dirty-tricks campaign to discredit Galant and promote Eizenkot. The resulting scandal, known as the Harpaz Affair, continues to ripple through the legal system, tarring Ashkenazi and several of his aides. (Investigators cleared Eizenkot of any involvement in the scheme.)

In the end, Galant was appointed to succeed Ashkenazi, but was disqualified at the last minute over an unrelated real-estate scandal. The search was reopened. With Ashkenazi’s term due to expire in days, Barak announced the appointment as acting chief of staff of Yair Naveh, then serving as deputy chief.

Naveh, a former chief of Central Command (overseeing the West Bank), had been called from retirement the previous fall (November 2010) to serve as deputy under fellow hardliner Galant. His appointment as acting chief was challenged before the Supreme Court by a group of leftist activists who cited a controversy from four years earlier.

In 2006 Naveh, then heading Central Command, had been challenged by junior officers — in the presence of a journalist — over an assassination order he issued, which they said violated legal guidelines issued by the Supreme Court. Naveh’s reply was “Don’t bother me with the Supreme Court” (azov oti im ha-Bagatz).

The justices in the 2011 suit rebuked Naveh for his earlier behavior but cleared him for the acting post. Before that took effect, however, the cabinet settled on former deputy chief Benny Gantz, everyone’s second choice, to succeed Ashkenazi.

This time, however, Netanyahu’s apparent attempt to sideline Eizenkot comes in the midst of a crisis of confidence between the prime minister and the defense and intelligence leadership on a scale never before seen in Israel’s brief history. In recent months every single living ex-head of the IDF, Mossad and Shin Bet — with the sole exception of Yaalon — has questioned Netanyahu’s failure to pursue what they unanimously believe to be existing openings to a permanent peace agreement with the Palestinians and the surrounding Arab states. Nearly one-fourth of all retired IDF generals recently signed a statement along the same lines.

No less remarkable, the dissent has spread from retirees into the uniformed brass. Current IDF chief Gantz and Mossad director Tamir Pardo have both dissented publicly from what they see as the prime minister’s overly alarmist stance toward Iran. Last week Shin Bet director Yoram Cohen, the one current service chief who’s seen as sharing Netanyahu’s hardline views, made waves by telling a Knesset committee that Palestinian leader Mahmoud Abbas was not promoting terror, flatly contradicting repeated statements by Netanyahu.

Up to now Netanyahu has responded, as I’ve reported, by patiently replacing mainstream commanders as they step down with newcomers closer to his way of thinking, frequently from the Orthodox community, where views tend to be well to the right of the current military-intelligence leadership.

His current intervention in the IDF chief nominating process, normally outside the prime minister’s purview, suggests that he’s losing patience.

Maariv’s Amir quotes officers speculating that Netanyahu does not expect to win the job for Naveh, but hopes to create a deadlock between Naveh and Eizenkot that will open the way for a dark horse, current Northern Command chief Yair Golan, who is seen as having support from the settler community while remaining within the mainstream IDF consensus.