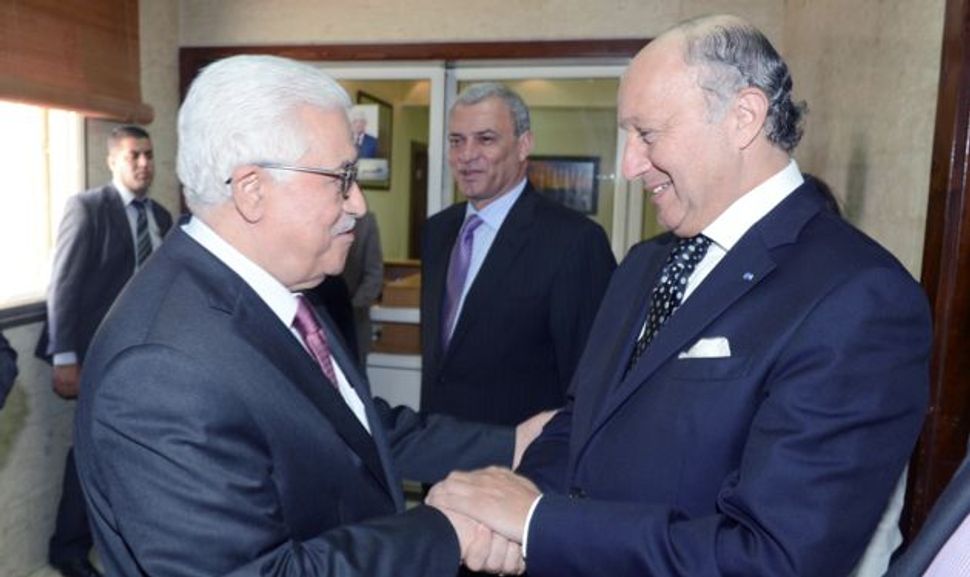 ‘Le moment venu” — when the moment is right.

This has long been the default response of the French minister of foreign affairs when asked if and when his government will officially recognize the Palestinian state. Over the past few weeks, forces both domestic and foreign have brought this particular moment ever closer. But it may well be that the moment, once France decides it is right, will have already passed to have any real influence on matters in the Middle East.

Both President François Hollande and his foreign minister, Laurent Fabius, were protégés of François Mitterrand, who founded the current incarnation of the Socialist Party and was France’s president from 1981 to 1994. No doubt neither man has forgotten that his mentor was the first president of the Fifth Republic to make a state visit to Israel. In 1982, when the bloom was still on the rose of his historic electoral victory, Mitterrand flew to Israel and addressed the Knesset. It was an iconic moment that healed more than two decades worth of bruising and bitter exchanges between the two countries.

While the image of Mitterrand standing in front of the Knesset to read his address remains vivid, the speech’s contents have grown blurred over time. Yet it pays to return to certain key phrases, if only to better understand France’s current position on negotiations between Israel and the Palestinian Authority. Denouncing the PLO’s refusal to accept Israel’s right to exist, Mitterrand insisted upon the Jewish nation’s right to security — a declaration, in the context of France’s pro-Arab tilt under Charles de Gaulle, hardly as self-evident as it now seems.

Yet, under the hard stare of Menachem Begin, Mitterrand also called for a Palestinian homeland. Using the phrase “le moment venu,” Mitterrand declared that this homeland can “at the appropriate time… mean a state.” The reason, he explained, was simple: “Because it is impossible to ask anyone to renounce their identity, nor to speak in their place.” In a political career clouded by dubious ties to the past — in particular, the period of the Nazi occupation — Mitterrand’s speech in Jerusalem was a shining moment of political courage and foresight.

More than 30 years later, the moment has yet to come. Late last year, Hollande followed in Mitterrand’s footsteps to Israel and the Knesset. In language that deliberately evoked his mentor’s earlier speech, Hollande declared, “Colonization must stop, because it is compromising the two-state solution.” And then, nearly word for word, Hollande ended his speech with the same flourish as his predecessor: “Longue vie et paix au peuple d’Israël.”

While Hollande did not take much of a step toward “le moment venu,” neither did he take a step back — that is, until this past summer and Israel’s offensive in Gaza. On July 9, as the exchanges of rockets and air attacks between Hamas and Israel intensified, the Elysée Palace announced that Hollande had spoken to Prime Minister Benjamin Netanyahu. According to the communiqué, Hollande “had expressed France’s solidarity in the face of rocket attacks from Gaza” and, critically, asserted that the Israeli government was “justified to take every measure in order to protect its population against these threats.”

Hollande’s apparent blank check to the Israeli government — which, according to the daily Le Monde was demanded by Netanyahu, who had been angered by the government’s earlier criticism of both sides — outraged not only pro-Palestinian movements in France, but also his own rank and file, appalled by what they considered Israel’s disproportionate response to the attacks. This anger has spurred the Socialist deputies in the National Assembly to present a nonbinding resolution to prod their irresolute president. In the draft — the final version will be voted on November 28 — the Assembly’s Foreign Affairs Committee criticizes the “illegal pursuit of colonization on Palestinian lands, which undermines the viability of a future Palestinian state,” and insists that the status quo is “untenable and dangerous.” Moreover, France’s recognition of a Palestinian state should be part of a “definitive solution to the conflict.”

Tellingly, Fabius has not opposed the vote — on the contrary, he has expressed his conditional support. Molded by France’s elite administrative school, the ENA, Fabius became in 1984 the youngest prime minister in the history of the Fifth Republic. And, during the two years he served, perhaps the most unhappy: Not only did unemployment continue to climb under his watch, but French Secret Service agents in New Zealand also sank the Rainbow Warrior, while at home hemophiliacs were given HIV-infected transfusions.

While Fabius was acquitted of responsibility in both cases, his political star nevertheless dimmed for a few years. With what hair he has left turning gray, he has since become one of the party’s elder statesmen and he will play a pivotal role in the government’s position on recognition of the P.A. No doubt in part because of his background — Fabius’s parents, born Jewish, converted to Christianity — the extreme left and right have attacked him as an unconditional supporter of Israel. Yet Fabius has not hesitated to lambaste both Israel’s Gaza offensive and its settlement policy.

In fact, following Israel’s bombing of the United Nations’ school in Gaza in early August, Fabius denounced what he called the “carnage of Gaza.” In a brittle communiqué, his office twice referred to the desirability of a solution “imposed” on both sides. Little came of this scarcely veiled warning, of course. But it is now clear that Fabius, unlike Hollande, has decided to emphasize Mitterrand’s insistence that Palestine must be and will be recognized. During this approaching winter of the world’s discontent, le temps venu seems that much closer.