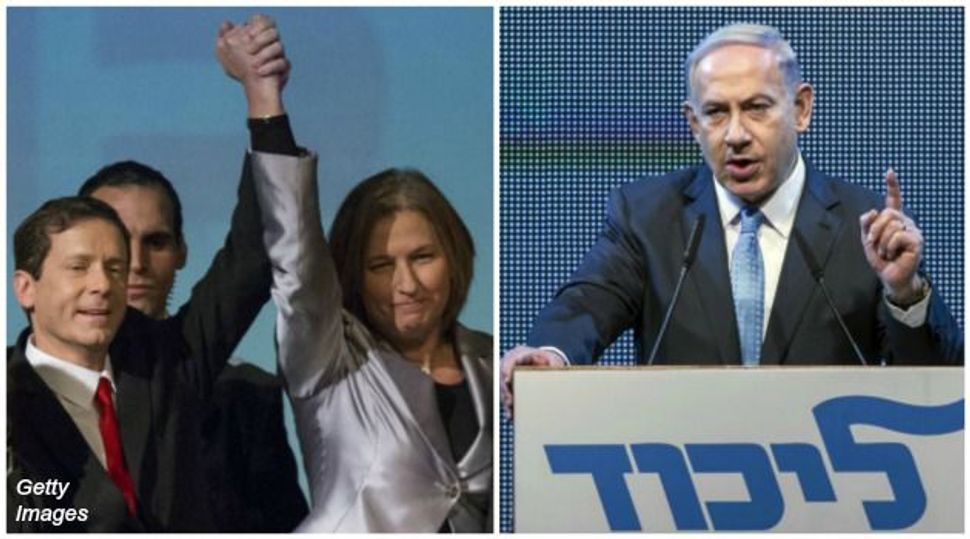 Of six polls released last Thursday and Friday, January 15 and 16, one — also the largest poll, with 830 respondents — showed Labor winning 24 seats to Likud’s 20 in the 120-member Knesset, while another showed Labor leading 25 seats to 22. The remaining four polls showed Labor ahead by one or two seats, the gap that’s separated the two parties as they’ve scrabbled for the lead over the past five weeks. (All the latest polls can be found here.)

Most observers called Labor’s new lead a post-primary bump, following the January 13 party vote that boosted women and popular young social activists to the top of the slate. At the same time, Netanyahu might be suffering from the bad publicity he got from his clumsily planned and executed trip to Paris for the post-Charlie Hebdo solidarity demonstration.

The polls don’t change the fact that the Likud still holds an advantage in the bargaining to form a coalition that will follow the election. The Likud has a natural ally to its right in Naftali Bennett’s Jewish Home party, which has been polling consistently in third place with about 16 seats. Labor’s equivalent to its left is Meretz, which is polling at 5 or 6 seats. Thus Likud begins the post-election coalition bargaining with a solid 38 to 40 seats lined up, while Labor begins with about 30.

Labor’s coalition-building disadvantage could potentially be closed by Yair Lapid’s Yesh Atid party, which left the Netanyahu coalition on particularly bitter terms in December and is widely considered unlikely to go back into a new Likud-led government after the election. Netanyahu himself vowed December 23 that he wouldn’t give Lapid a ministry in a new government. All this suggests that Yesh Atid will likely be in the Labor camp when the post-election bargaining begins.

Lapid will drop considerably from the 19 seats he won in the 2013 elections, but his fall doesn’t seem likely to be as severe as once feared. He was polling in single digits through much of December. Polls last week showed him winning from a low of 7 to as many as 12 seats.

Lapid is a double-edged sword for Labor, though. If the current poll numbers hold up — and with slight variations they’ve been remarkably stable for a month — then any conceivable Labor-led coalition will have to include the Haredi parties, Shas and Torah Judaism.

Both Haredi parties have made it plain in recent days that they’re open to a partnership with Labor. It will be a lot harder, though, to get them to sit down with Lapid, whose top campaign issue in the last elections and through the early months of the outgoing government was trimming Haredi privileges by forcing them into army service and the job market.

Of the two Haredi parties, Shas will be the easier nut for Labor to crack. Shas’s founder-turned-felon-turned-returning-chairman, Arye Deri, is sitting pretty after theatrically quitting politics last month. His resignation came after rival Eli Yishai released a tape of the late Rabbi Ovadia Yosef badmouthing Deri. The resignation brought cries from the party’s base and rabbinic leaders for him to return, and he came back this week stronger than ever, strengthening his left-leaning diplomatic and economic faction within the party. Yishai left Shas in the fall to form his own far-right party, but polls consistently show him falling short of entering the Knesset. Some far-right settler rabbis are trying to arrange a partnership between Yishai and the ultra-right, Kahanist-leaning Otzma Yehudit party, which could put both of them over the line and into the Knesset, polls show. There’s also talk that they could be joined by Moshe Feiglin, the messianist whom Bibi forced out of the Likud last month.

It will take a lot of ingenuity on the part of Labor leader Yitzhak Herzog and his partner, Tzipi Livni, to find a formula that puts Lapid and the Haredi parties around the same table. The one clear advantage that they hold is the intense level of bitterness toward Netanyahu among the Haredi party leaders right now, after he left them out of his last government and agreed to the legislation they disliked.

Those two parties hold the key to the next government. Kahlon, a onetime Likud rising star who quit the party in 2012, has been running a lackluster campaign and has chosen a distinctly colorless slate of candidates, but he’s still running almost even with Lapid at 8 to 10 seats in most polls. He calls himself “a Likudnik who agrees to yield territory,” and his leanings after the election remain a mystery.

As for Lieberman, his party, once a rising powerhouse to the right of Likud, has been plummeting in the polls in the wake of the corruption scandal that saw some two dozen party leaders and activists arrested in late December. The latest polls this week show him dropping as low as 5 seats if elections were held now, dangerous close to the threshold below which a party may not enter the Knesset.

Under a recent legal change, a party must win 3.25% of the popular vote, roughly equivalent to 4 seats, to enter the Knesset.

In addition to the bad publicity from the scandal, Lieberman has seen a wave of resignations by top lieutenants in recent days. In addition to party director-general Faina Kirschenbaum, the highest-ranking person suspected in the corruption investigation, four other top figures have informed Lieberman that they won’t be running in the next election: agriculture minister Yair Shamir (son of former prime minister Yitzhak Shamir); tourism minister (and onetime Likud “prince”) Uzi Landau; internal security minister Yitzhak Aharonovitch; and Knesset law and legislation committee chair David Rotem.

Shamir’s resignation came this week, after Lieberman announced the party’s catchphrase for the election: “Ariel for Israel, Umm el-Fahem for Palestine.” Shamir, a hardline hawk on the territories, said that he couldn’t support Lieberman’s new diplomatic line.

Ariel is an urban settlement, deep in the heat of the West Bank, that’s been a consistent source of tension between Israeli and Palestinian negotiators. Umm el-Fahem is an Israeli-Arab town close to the Green Line between Tel Aviv and Haifa; it’s the heart of Israel’s largely Arab Little Triangle region, which Lieberman wants to transfer to Palestinian sovereignty in any land swap that follows a peace agreement.

Lieberman’s Little Triangle plan is enormously controversial, particularly on the liberal left, where it’s regarded as tantamount to racism since it’s aimed at ridding the state of non-Jewish citizens. On the other hand, the right reacted angrily this week when Lieberman unfurled his new slogan, since it essentially concedes Palestinian statehood with borders near the pre-1967 lines. In fact, conceding Umm el-Fahem to the Palestinians leaves Israel’s narrow central waist even narrower than it is today.

There’s turmoil among the Arab parties, too. The three parties that represent Israel’s Arab community in the Knesset, the communist-led Hadash, the Arab nationalist Balad and the Islamist-leaning United Arab List, have been under pressure to unite out of fear that the new threshold would eliminate some or all of them from the legislature. Negotiations have been tough, partly because the ideological differences among them are so deep. Talks have been particularly tough within Hadash, which despite its mostly Arab voting base is a Jewish-Arab party with a mixed leadership.

This past week, as the deadine for submitting Knesset slates approached and unity talks switched into high gear, several of Hadash’s top leaders announced that they were quitting politics, including party chair Muhammad Baraka as well as fellow Knesset member Afou Agbaria and onetime lawmaker Issam Mahoul, who had been expected to challenge Baraka for party leadership this spring. A Hadash convention this week chose party secretary-general Ayman Oudeh, a Haifa lawyer, to replace Baraka as chairman. The party’s top Jewish figure, Dov Khenin, also known as the Knesset’s leading environmentalist, was reelected to the third slot on the slate.

Recent polls have shown that if they ran separately, Hadash would win five Knesset seats, the United Arab List would win six and Balad would fail to enter the Knesset. Running jointly, the three parties would pick up an extra seat for a total of 12. The unified Arab list is expected to be for the elections only; they’re expected to retain their separate organizations and caucus separately once the new Knesset convenes. Khenin and several other top Jewish Hadash leaders had reportedly threatened to quit if the parties actually merged into a single Arab-nationalist caucus.