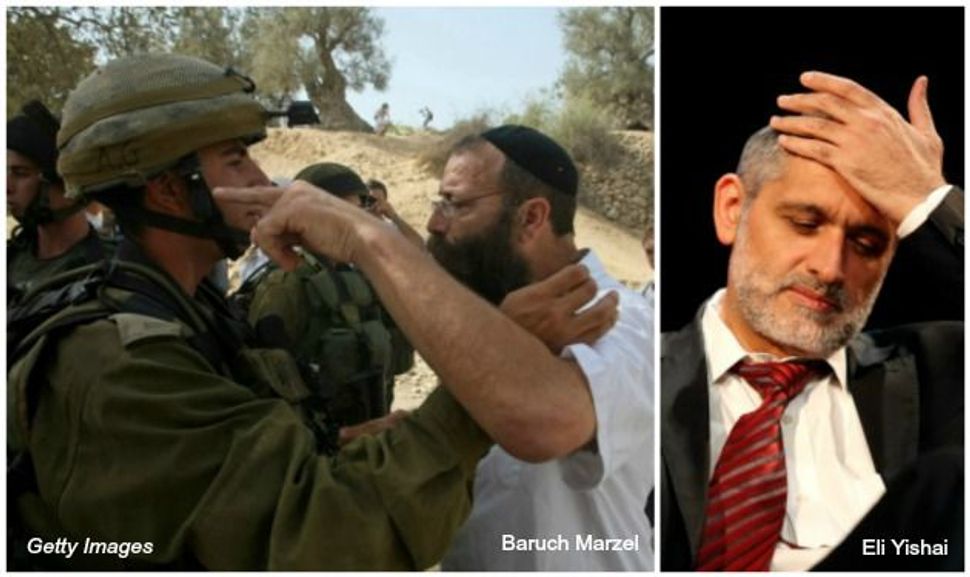 Kahanism Redux: Eli Yishai, the former Shas party chairman who quit in December and formed his own religious-right party, Yahad-Ha’am Itanu (“Together – The People Are With Us”) has joined forces with the Kahanist Otzma Yehudit (“Jewish Strength”) party of Baruch Marzel and Michael Ben-Ari. Polls have consistently shown that neither of them would pass the vote threshold and enter the Knesset separately, but together they would get the required minimum 3.25% of the popular vote, which translates to 4 Knesset seats. Accordingly, it now looks like Baruch Marzel, onetime spokesman for Meir Kahane’s Kach party, who inherited the party leadership after Kahane was assassinated in 1991 and today is arguably the most militant leader on the far right of the settler movement, will enter the Knesset in March.

Yishai had tried earlier to join forces with Tekuma, the right wing, settler-dominated wing of the Jewish Home bloc led by housing minister Uri Ariel. But that fell through after Yishai’s spiritual mentor, Rabbi Moshe Mazuz, forbade the placing of women on the party list. Ariel continued to support the Yishai alliance, but lost a vote in the Tekuma leadership.

Yishai was appointed head of Shas in 1999 by the party’s spiritual leader Rabbi Ovadia Yosef, after party founder Arye Deri was convicted of graft. When Deri entered prison in September 2000, Yishai began moving the party from Deri’s dovish, pro-Labor and moderately social-democratic policies toward his own arch-conservative views.

Among other things Yishai pulled out of Ehud Barak’s coalition in December 2000, leaving Barak with a minority government and ultimately torpedoing the Camp David negotiations that had resumed informally in August in Jerusalem. The talks resumed officially in December in Washington and then in January at Taba, but Barak had lost his majority and called for new elections, which he lost to Ariel Sharon (thanks in large part to the outbreak of the Second Intifada the previous October). From then on Shas was considered a staunchly hawkish party, firmly allied to the Likud. In 2012, though, after Deri had finished his 7-year post-prison cooling off period, Ovadia put Deri back in command, of a 3-member party troika – himself, Yishai and centrist Ariel Attias. Deri managed to give the No. 4 slot to his ally Yitzhak Cohen, who called right after the January 2013 elections for Israel to endorse the Arab Peace Initiative. Trench warfare between Deri and Yishai has been a constant ever since.

Benny Begin’s Back: Prime Minister Netanyahu took a big step toward blunting the far-right and anti-democratic image of his Likud party by recruiting Binyamin Begin, the onetime senior statesman and son of the former prime minister. Begin was named to the No. 11 slot on the party slate, a spot that’s reserved for personal appointees of the party chairman, outside the primary system.

Begin, 71, first entered the Knesset in 1988 and served more or less continuously until last year’s elections, with timeouts for a couple of angry retirements from politics because of ideological objections (mostly related to the Oslo accords, which he opposed). He’s a hardliner on territories, against Palestinian statehood, favors keeping military control of the entire West Bank, but a strong champion of civil liberties and democracy issues. His defeat in the 2012 party primaries (for the 2013 elections), along with fellow democracy champions Dan Meridor and Michael Eitan, was seen as a blow to the Likud’s moderate wing and a victory for the far-right young turks.

Bennett’s Blunder: Naftali Bennett, Israel’s current economics minister and head of the Jewish Home party, lost big this week in his effort to turn his party from a sectoral religious-nationalist grouping into a mainstream movement with clear ambitions to govern. On Monday evening Bennett announced a huge coup in recruiting Eli Ohana, beloved onetime Betar Jerusalem soccer star, to join the party as No. 8 on the party’s Knesset slate. The appointment of Ohana, who isn’t religious, caused an uproar among party leaders, most of whom are committed to the party’s religious identity and principles.

Bennett previously had been inching toward a nonsectarian identity. His current caucus includes one secular lawmaker, Ayelet Shaked (here’s the Forward’s recent profile of her), who serves as the party’s Knesset faction chair (or whip). A few weeks ago he recruited Ronen Shoval, founder and leader of the right-wing pressure group Im Tirtzu, famed for trying to paint the New Israel Fund as subversive. But Ohana was evidently a step too far for the party faithful, partly because he openly endorsed Ariel Sharon’s Gaza disengagement plan a decade ago (he’s since recanted). And partly because, having spent his career drawing throngs of Israelis to watch the national sport on Saturdays, he embodies much of what much of the Orthodox rabbinate — the ultimate authority in religious politics — most bemoans. Today Ohana announced that he was dropping out, saying “I’m not made for this.”

In another challenge for Bennett, onetime Yesha Settlement Council head Danny Dayan today quit the party. He’d been slotted to number 20 on the slate, which made it unlikely he’d make it into the Knesset as polls show the party winning between 15 and 17 seats. But Bennett moved him to number 17 at the last minute in what’s been interpreted as a naked move to shove another candidate further down the list and out of the running. That would be Avichai Buaron, who caused a stir when Yediot Ahronot last month found statements he’d made calling for the Dome of the Rock to be removed from the Temple Mount in order to make way for the Third Temple. At one point Dayan said he didn’t want to be part of an undemocratic move to sideline Buaron, who won his slot in a democratic primary. At another point he said he’d joined the party slate in order to enter the Knesset and make a difference, and he didn’t want to be window dressing for the campaign.