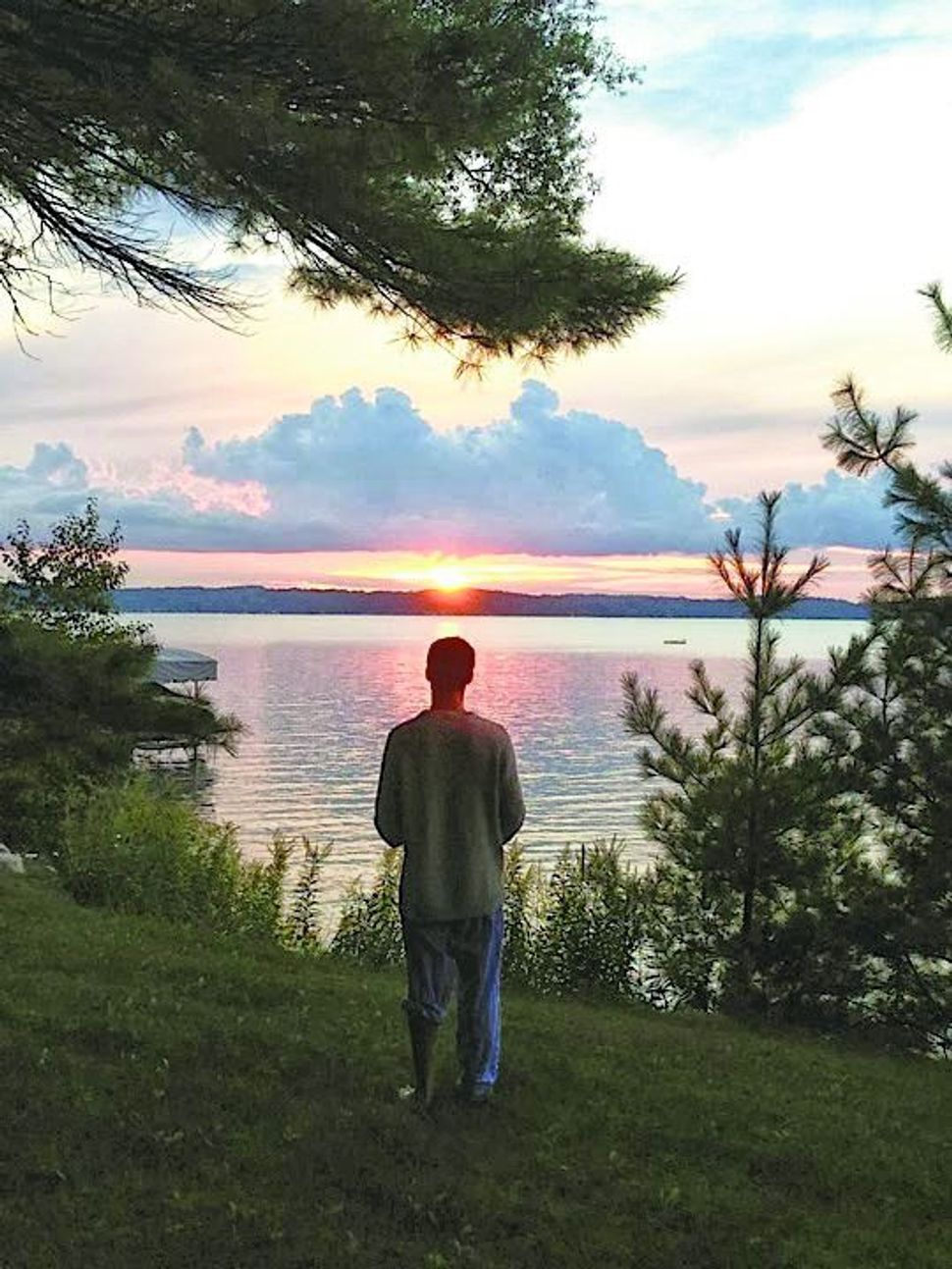 Meditation: 'I do not fear death,' Gordon wrote when he posted this photo on his blog. Image by Aaron Massey/Shiffman Cottage Productions

What does a meditation retreat have to do with the attacks in Paris?

I asked myself this question as my co-teachers and I sat down to plan the details of the upcoming Elat Chayyim Meditation Retreat, a week of silence, meditation and davening that takes place around Christmas. It felt incongruous to mull over the passing time between yoga and dinner while the world was once again engulfed in flames.

And then came the reaction.

Unbelievably, we have seen some of the worst of human nature on display since the Paris attacks, along with some of the best. Consciously-or-unconsciously-racist politicians, either cynically exploiting xenophobia or manifesting it themselves, have called for some of ISIS’s most devastated victims — innocent civilians in Syria — to be victimized again, denied shelter in a country that once lifted up a lamp beside the golden door.

Of course, there are terrorists masquerading as refugees, and we cannot afford to let a single one gain entry to our shores. But have any of the pundits and politicos shutting the golden door actually examined the exhaustive processes required for refugee status? The sieve is already fine; it will already sift out the bad, and many of the good will be caught in it out of caution.

Moreover, if we’re worried about terrorists coming to America, what about tourist visas? Hundreds of Belgian and French nationals arrive at JFK every day, with nary a background check. Don’t they pose a far greater threat than refugees who must run through the ICE dragnet? No, rationality has nothing to do with these draconian, un-American, and ugly calls to turn our collective back on these people. What, then? Fear, mostly; opportunism; ignorance.

After the attacks in Paris, my first reaction was rage — just like after the Paris attacks last January. In my heart, I sounded a lot like these conservative politicians. I wanted someone, somewhere to strike back, and hard.

But as the time passed, it became clear to me that underneath the rage was sadness, vulnerability, pain, anxiety. What could be more innocent than going to a soccer game, sitting at a café, or seeing a band at a club? And yet, as Israelis know all too well, innocence is a luxury. The trivialities of daily life are, in fact, quite fragile, and can be taken from us at any moment — if not by acts of violence, then by illness, time, or just bad luck.

That pain is uncomfortable, especially, I think, for men. To admit that we lack power over our own lives is terrifying and considered unmanly. It feels better to pretend we have some control. And so, we will smash ISIS, we will slam the doors, we will collectively punish the innocent for the misdeeds of the guilty — even though those innocents are precisely the ones the guilty have hit the hardest.

That fear is not unjustified; it is real. The Americans and the French are now getting a taste of what it means to be Israeli or Palestinian. It is not paranoia to fear that your whole life could be destroyed in an instant; it is an accurate assessment of the situation. It is random, it is awful and it is evil.

But to have that fear exploited by opportunistic politicians who should know better (Ben Carson excepted) is inexcusable. Real leaders wouldn’t pander to fear and ignorance, let alone stoke them. They would address their worried constituents with cold, ruthless reason.

Yes, they would say, we will pursue the evil men who seek to provoke World War III. We will also root out the causes of their appeal, strengthen moderates while isolating rejectionists. In other words, we will do exactly the opposite of collective punishment: we will divide and conquer.

To be coldly calculating in this way means recognizing and coexisting with the fear and uncertainty that lies within, and recognizing that macho posturing will only make matters worse.

Which, of course, is exactly what one learns in the practice of meditation. It is possible to coexist with difficult emotions — my new book focuses on sadness — and set down the burden of trying to make them go away. In fact, once that burden is released, it’s possible to feel joy and sadness at the same time. This is how it is. This fear, this anxiety, this grief is just part of how things are right now.

To reiterate, that doesn’t mean we shouldn’t act to address the situation, including with force. On the contrary, it means that we should act, but in a way that will actually make the situation better, instead of just make me feel better.

This is true in our mundane, daily lives; it is true on the streets, in solidarity with Black Lives Matter; and it is true in our nation’s response to Islamic extremism. Actually, the sitting, walking, breathing and noticing we’ll be doing on our retreat has everything to do with acting skillfully and justly in the world. Spirituality isn’t a narcotic, it’s a vaccine. By experiencing the range of human emotion on a tiny, confined scale, it’s possible to develop resistance to the habits of mind that cause harm to ourselves and to others.

Acting on fear or anger is unwise and self-defeating, even if it yields short-term benefits for demagogues. It can also be immoral. When Donald Trump said of ISIS, “I would bomb the s—t out of them,” and when an entire arena burst into applause, was anyone thinking of the consequences? Bombing the s—t out of ISIS would require thousands upon thousands of innocent civilian deaths. Sure, some of those people might be ISIS sympathizers, but most are not. So those people are applauding a call to mass murder.

It probably felt good in the moment, to feel like we can actually do something about these evil bastards and their medieval war. It might even feel good if we did it. Indignation often feels good if you feel righteous about it.

But it wouldn’t be good, or even smart. To discern what is wise and what is just requires more than infantile braggadocio. It requires a moral mind that is powerful, malleable, aware. A mind that is trained to pay attention.