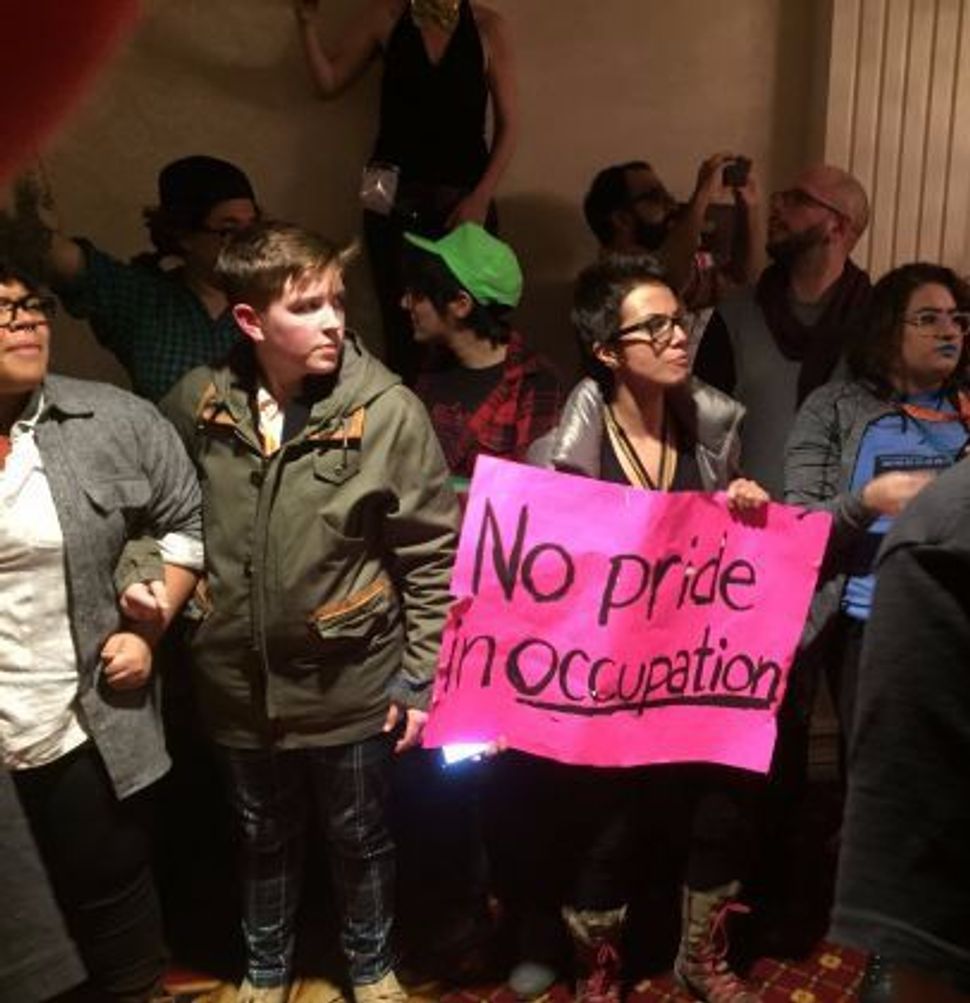 This column is not about the recent anti-Israel , which partially shut down a reception featuring Israeli LGBT activists.

It’s about the ugly, angry way we talk about such things. And as usual, I’m going to call out both the right and the left.

As journalists and Internet trolls “discussed” the events at the conference last week, incendiary rhetoric reigned, and rained down on all sides.

The protest shut down a Shabbat service! (False) The event was an Israeli government initiative! (False) And of course, the protesters were anti-Semitic. (False)

Worst of all was the prevalence of a certain right-wing insult aimed at the anti-Israel protesters, which deserves special opprobrium and which should never be tolerated in civilized conversation: “Let them try being gay in Gaza.”

“Let them have a gay parade in the Palestinian land,” one person said. “Send the parade to Iran,” said another.

Let’s parse this insult for a moment.

First, it implies that anyone who sees a linkage between the oppression of Palestinians and the oppression of LGBT people is hopelessly naive, believing Palestine to be some queer paradise of unicorns and rainbows. No, that’s not what we believe. We believe that to fight oppression means to fight oppression, wherever we see it and whoever the victims are. We don’t think victims are noble, but we don’t think they have to be. Sexists and homophobes still deserve the right to vote, the right not to be victims of collective punishment, the right to national autonomy.

This is the same idiocy behind the Adelson-Boteach ads proclaiming “In Gaza they kill gays like me, but in Israel I am free.” As if Hamas’s homophobia were the reason for Israel’s “shock and awe” bombing of Gaza, or somehow makes it all okay.

It’s a genocidal insult. Telling LGBT people to go have their parades (protests, actually, but who’s counting) in Iran or Palestine serves to reveal the speaker’s own vicious homophobia. In fact, it confirms the claims of those who critique pinkwashing: that some people only care about LGBT people when it serves their interests to do so.

When I’m a Good Gay living in Tel Aviv, you put me on a poster for hasbara. When I criticize your actions, you wish me death in Gaza.

Here’s the message, then: Support Israel, gay people, if you know what’s good for you. And if you don’t, well, why don’t you go get yourself killed by a brutal homophobic mob that ties a burning tire around your head or pushes you off a building. What a surprise that such messages don’t seem to work.

Meanwhile, while pro-Israel folks wish me death by torture, they claim that the anti-Israel crowd is anti-Semitic. They say that Israel is being “singled out” among all the horrible countries in the world, and that Jews are being blamed for its sins.

Israel is not being singled out by protesters; it is being singled out by the United States, which since World War II has given it $124.3 billion, at a current pace of roughly $3 billion per year. For this reason, Israel is unlike any other country in the world. It is practically a client state of America.

And yet, unlike our other allies, it occupies 4.75 million people and denies them the basic rights of autonomy. The ostensible reason is security, but the majority of Israel’s current government has pledged to oppose a Palestinian state in principle as well as in practice. This, too, is unlike any American ally in the world.

Israel doesn’t have a marketing problem. It has a product problem. And until it changes a core feature of that product — the denial of basic human rights and the violent occupation of territory — no amount of Adelson propaganda will work.

To say that criticism of these policies is anti-Semitic is to demean the fight against anti-Semitism. It may well be that Israel’s critics are unfairly anti-Israel, myopic, confused, ignorant and dangerous. And yes, there are anti-Semites and anti-Semitic themes among them. But to protest an Israel-related event is an act of protest, not bigotry.

And then there are the hysterics on the left. Reports from the Creating Change conference say that Jews were called “motherf—king racists” and “Ku Klux Klan.” While shocking, such rhetoric is not surprising. Increasingly, words mean nothing in the struggle against Israeli “apartheid” or “genocide” or “racism.” Is it not possible to critique the occupation without these terms? Of course it is, but then the criticism wouldn’t sting as much, wouldn’t seem as powerful to those who utter it.

It’s a thrill, really, to utter terms like “apartheid” or “anti-Semitism.” I’ve faced the temptation several times in this column alone. You say the talismanic word, and an imaginary hush falls across the room. Oh, you went for it, you said it, you are strong.

Garbage. Without a two-state solution, an Israel-Palestine ruled by Israel will indeed become a state of apartheid, with two classes of citizens, one superior and the other inferior. But that is not yet the status quo, and outside the Israeli right’s imaginary bubble, the world will not stand for it. Using the term unseriously is irresponsible, and creates heat rather than light.

Likewise with terms like “genocide” and “racism,” which have formal definitions, but which are lobbed instead as insults.

Ironically, when maximalist rhetoric such as “from the river to the sea” is used at protests and other events, such rhetoric is, itself, genocidal — unless we are to believe that six million Jews are meant to live peaceably as a hated minority within Greater Palestine. Yet there has been a total failure by Jewish Voice for Peace and other anti-Israel groups to persuade their allies to avoid such rhetoric.

The Israel/Palestine conflict is tragic, complicated and hard to solve. Yet more and more voices, on the right and the left, are making it even worse. Instead of helping the difficult work of multiple narratives, truth-telling and nuance, such voices enflame the worst in each of us.

To quote the Internet, STFU.