Every morning when I walk my son Teddy to the subway station at the corner of St. Nicholas Avenue and 145th Street in our Hamilton Heights neighborhood in Harlem, we pass a sea of young men and woman making their way from the trains toward City College.

Founded as the Free Academy of the City of New York in 1847, “it was established to provide children of immigrants and the poor access to free higher education based on academic merit alone,” according to the college’s website.

After I wish Teddy a good day at school I turn toward home, walking with the tide of young people carrying backpacks; kids with faces so diverse — the school boasts a student body that represents over 150 nations.

They are all on their way to an institution of higher learning that’s turned out more Nobel Laureates than any other public college or university in the United States — a number of whom were Jewish, including Arthur Kornberg for physiology/medicine in 1959, Herbert A. Hauptman for chemistry in 1985 and Leon M. Lederman for physics in 1988. (In the early 1900s, as the number of Jewish students grew as a result of the migration of Ashkenazi Eastern Europeans to New York, the school did away with mandatory chapel attendance.)

This morning, our path was decorated with messages, one after another, written in colorful chalk on the sidewalk — messages of hope and peace and protest and inclusion. I tried to catch them all. Here’s what I saw.

On My Morning Walk, Chalk Messages Mark Path of Hope for Immigrants to City College 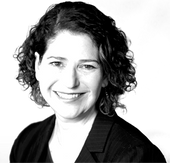 Liza Schoenfein is the senior food writer for the Forward. She is also a writer and recipe developer and author of the blog Life, Death & Dinner. She was editor-in-chief of Jewish Living magazine, executive editor of Saveur, and was the editor ofGoodhousekeeping.com and Parenting.com. She has written articles and developed recipes for a wide range of publications including Elle, Saveur, Self, Fitness, Cooking Light, Country Living and Epicurious.com. She is working on a cookbook and a memoir about food and family.

On My Morning Walk, Chalk Messages Mark Path of Hope for Immigrants to City College