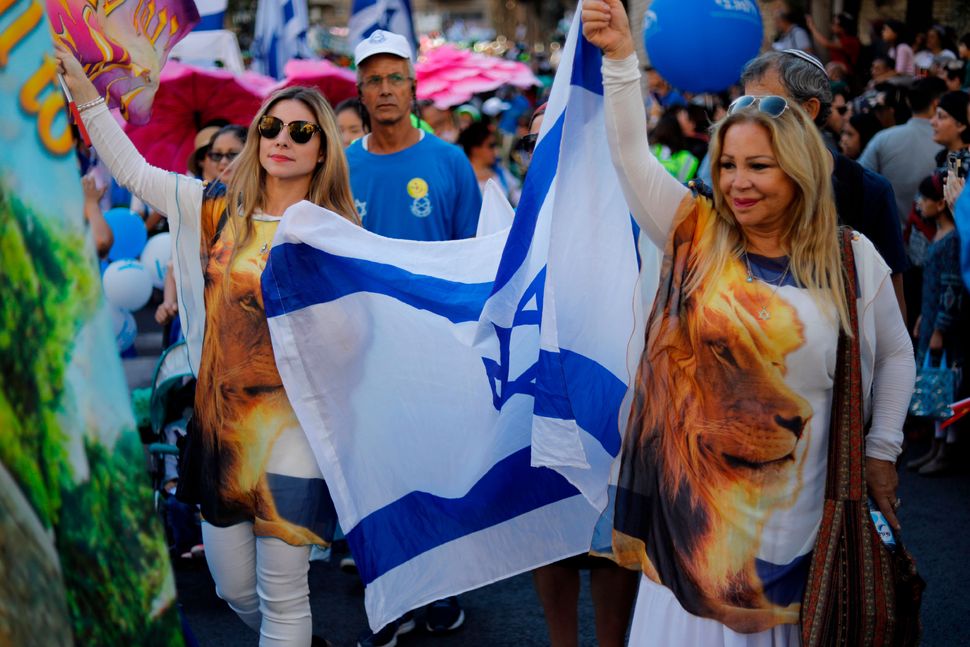 Over the past few months, a controversy has rocked the Jewish community. After David Myers was appointed president and CEO of the Center for Jewish History, in Manhattan, a small group of individuals published a scathing letter accusing Myers of supporting a boycott of Israel and undermining the Israel Defense Forces. On the grounds that Myers is “anti-Israel,” the group claimed he is unfit to lead an American Jewish institution.

Far from “anti-Israel,” Myers, a professor of Jewish history at UCLA and a critically acclaimed scholar of modern Judaism, is a member of the academic advisory board of J Street and is on the board of the New Israel Fund. He proudly considers himself part of the Zionist left.

But as ridiculous as this smear campaign was, it is not a unique or isolated affair. Rather, it exposed a new and deeply problematic trend in the American Jewish community, a trend of making support for Israel — and a very particular kind of support at that — a new litmus test for who gets to belong to the Jewish community. Say the wrong thing or belong to the wrong group, and you can have your funding pulled or your credentials revoked or your play canceled.

We Jews know all too well how pernicious litmus tests of belief can be. But this litmus test is not only policing –- and censoring — Jewish thought. It is unwittingly pushing our community as a whole away from the historic models of American Jewish identity, and right into the hands of Evangelical Christian Zionism.

For the past 2,000 years, Jewish identity in the Diaspora did not focus primarily on Eretz Yisrael as a source of its religious identity. The land was a place of pilgrimage and a source of messianic hope and certainly a central part of Jewish liturgy. But settling in the Land of Israel was more aspirational than real for most Jews.

The reality — and the genius — of the Jewish Diaspora was that Jews always found a way to construct models of identity and resilience within the societies in which they lived, fulfilling Jeremiah 29:5, “Build houses and dwell in them; plant gardens and eat of their fruit.”

The emergence of modern Zionism in the late 19th century did not displace the richness of Jewish Diaspora life but added to it. Nor was Zionism an ideological monolith. Rather, it was characterized by vigorous debate. The arguments were as intense as they were variegated, such as the debate between statists like David Ben-Gurion and non-statists like Ahad ha-Am, or the debate between secularists such as Herzl, Max Nordeau and Yosef Brenner on the one hand and religious Zionists such as Abraham Isaac Kook and Isser Yehuda Unterman on the other. You had spiritual humanists such as Martin Buber, and fierce nationalists such as Ze’ev Jabotinsky. There were even the territorialists who opposed the Land of Israel as the place of settlement because it was impractical, and argued for other lands that would expedite the process of saving Jews from an increasingly dangerous Europe.

Above all, Zionism as expressed in the Diaspora was about the rise of a new form of Jewish collective consciousness, culturally, politically and spiritually. And in America, in classic Jewish style, these debates existed within an orbit of legitimacy whereby different views, within limits, were tolerated, if sharply criticized. Think of American Zionist leaders such as Judah Magnus (1877-1948), a Reform rabbi who supported a binational Arab-Jewish state, and Nachum Goldman, president of the World Jewish Congress, who was openly and publicly very critical of Israeli polices. (According to the standards of David Myers’s protesters, neither would be fit to run the Center for Jewish History today.)

As everywhere, Zionism did not supplant the identity of Jewish Americans so much as give it another facet, one that, like socialism, or Orthodoxy, or even communism, was an epistemology American Jews could choose to add to their already thriving identities.

Even the advent of the State of Israel in 1948 did not erase the focus of Jewish diasporic life. Zionism in America, not a majority view before the World War II, certainly got a tremendous boost after 1948. And yet even then, American Jews were still not focused primarily on Israel to construct their identity. Before 1967, most American Jews had never visited Israel. This changed after the Six Day War, when Israel became a much more central part of American Jewish identity and when Zionism became, to some extent, “the law of land.” Norman Podhoretz wasn’t totally wrong when he wrote in Commentary Magazine in the early 1970s that “we are all Zionists now.”

Despite its current ubiquity in our ranks, until recently, American Jewry has continued to negotiate the boundaries and limits of Zionism within a broad range of viewpoints, from the radical right-wing supporters of Meir Kahane to American Friends of Peace Now. And throughout, Jews held tightly to the distinction between being an American Jew and supporting Israel, the historian of American Zionism Judah Bernstein argues. This is in part because of the threat of dual allegiance that always hovered over the American Zionist enterprise. American Zionists needed to assuage those who would claim, as some did in the 1930s, that American Jews were not fully committed to the American project.

But they were also proud of their identities as Americans, a pride that only increased as anti-Semitism in this country waned and Jews began to excel. The mass migration to Israel that was expected after 1967 simply never happened. And of course, we continued to debate the nature of Zionism, and what relationship we owe our Israeli brethren.

Even worse, it’s dragging us into a particularly evangelical Christianized view of the Jewish future.

For Jews are not the only Zionists in America. Indeed, Christian Zionism has a long history extending back before modern Jewish Zionism. The notion that the Second Coming is dependent on the Jews’ return to Palestine as a condition for the final rapture in the Book of Revelations has a long history in European and American Protestantism and later evangelicalism.

Perhaps the most well-known early Christian Zionist in America, William Blackstone (1840-1934), petitioned the U.S. government to restore Zion to the Jews. He believed the United States was chosen to play the role of a modern Cyrus who helped finance the Jews’ return from exile to build the Second Temple.

But Blackstone was only the first in a long line. Over time, especially after the Six Day War, Christian Zionism became more prominent in evangelical circles, while mainline Protestants became more sympathetic to the Palestinian cause. And these evangelical Christians weren’t always in sync with Jewish interests, either. Christian organizations such as the International Christian Embassy in Jerusalem began promoting strong right-wing policies that included a swift rebuilding of the Temple on the site of the Dome of the Rock, against the will of many in the Israeli government.

But many right-wing groups in Israel have supported evangelical Zionism, and Israeli Prime Minister Benjamin Netanyahu stands among them. Take, for example, his readiness to court evangelical Christian Zionists while dissing Conservative and Reform Jews who are pushing for religious equality in Israel. Or think of his willingness to attack a standing American president in Congress regarding the Iran Deal that a solid majority of American Jews support, or his attitude that American Jews best serve their historical purpose by supporting Israel. All these point to an Israeli leader who seems more aligned with Christian Zionists than with the majority of American Jews.

What few seem willing to admit is that Christian Zionism and Jewish Zionism have little in common. As we’ve established, Jewish Zionism — the belief in the national identity of the Jewish people and its right to self-determination –- has always been characterized by debate, a debate that includes the belief that Jews can have fruitful lives of self-determination in countries that aren’t Israel. By contrast, in the evangelical Christian Zionist vision, Jews are instruments of an unfolding eschatology. As such, Jews have no real role in the Diaspora other than as promoters of their own return to Zion.

Furthermore, the political, moral nature of the Jewish state –- or of the Diaspora Jewish community, for that matter –- is not a central concern for the evangelical Christian Zionist community; rather, American Jews have one basic role: maximizing the power and influence of the State of Israel so that all Jews can return and the Second Coming can happen. Like Blackstone, many evangelical Zionists believe that American’s role in this process is largely to serve as the facilitator of Israel’s rise in preparation for the Rapture.

The idea that Jews remain only visitors in America until they return home is actually an idea that the evangelical eschatology shares with some strains of Zionist thought; it’s known as “Negation of the Diaspora.” But in the evangelical model, there’s an implicit threat, too. For what happens after all Jews return to Israel, one can open up the Book of Revelations and be surprised. It isn’t pretty.

Moreover, in the evangelical dream of the Jewish return to Israel, there is a subliminal threat that one day we could lose our status as citizens here in America, because our role will have become complete (this is one reason that white nationalists such as Richard Spencer could call his movement “White Zionism.” Jews have a role to play -– and it is not here). For many Christians, we Jews in large part operate as stand-ins for the Jewish nation-state that evangelicals feel such a strong connection to for their own purposes. When we Jews are not sufficiently “pro-Israel” — defined by supporting Israel’s right-wing policies — we are not being “good Jews” in the eyes of many Christian evangelical Zionists.

And there are many Jews who would agree. Indeed, this is exactly where the new Zionism being foisted on us by those who advocate for pro-Israel litmus tests is headed.

The litmus test Zionism of today is essentially a capitulation to this Christian model of Jewish identity. Rather than moral actors, agents of our own destiny in a country we call home, we are double agents acting first and foremost for Israel.

The price of this litmus test is the loss of our ability to negotiate our Jewishness in a society that is not inextricably tied to a place where we choose not to live. And it significantly curtails our Diaspora history and identity. Recall that “Negation of the Diaspora” Zionism was rejected by those American Zionists who attended the Biltmore Conference with Chaim WeizmanN and David Ben-Gurion in May 1942.

Ben Zion Dinur, the first “Minister of Education” in Israel and a strong proponent of “Negation of the Diaspora” Zionism, once said, “All Jewish history is Zionist history.” Evangelical Christian Zionists would agree. But such a perspective does not bode well for the health of American Jewry.