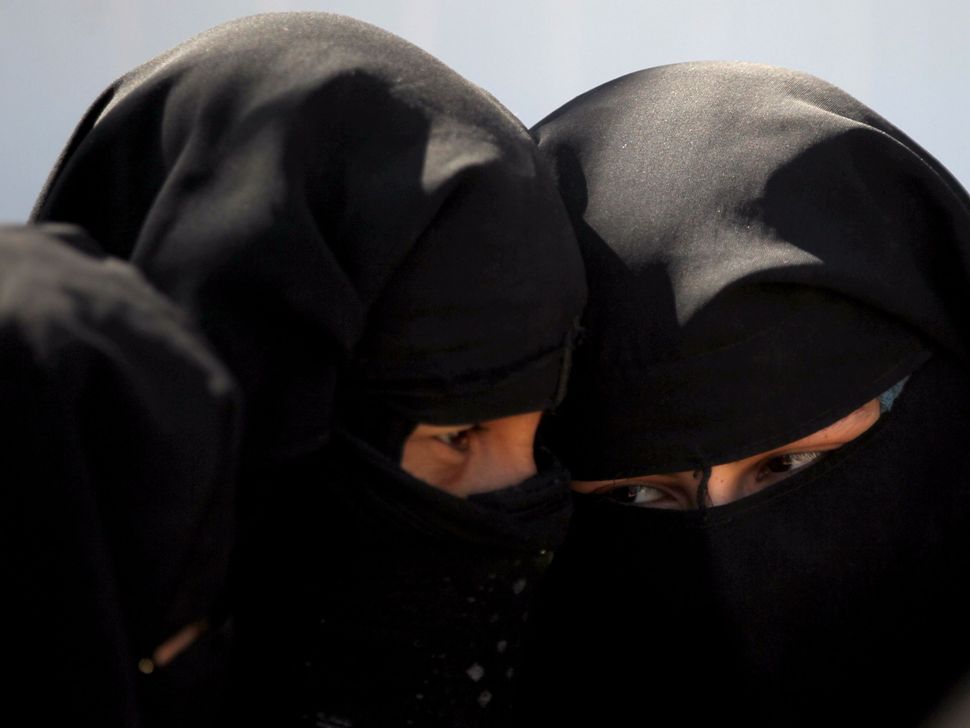 Earlier this year, I wrote about a town in New Jersey called Mahwah, where tensions have erupted between Orthodox Jews and their non-Jewish or nonreligious neighbors. Things were getting so bad that a group called Mahwah Strong formed, devoting itself to keeping the town “diverse.”

That diversity didn’t extend to Hasidic Jews, which many in the group seemed to view with fear and distrust.

While working on this story, I asked a self-identified Haredi Jew why residents of Mahwah were so afraid of a potential influx of religious Jews.

“Because we’re so visibly different, it’s so easy to ‘otherize’ us,” he told me. “People really do fear what they don’t understand.”

These words came back to me as I read about a new restriction against Muslim women in the Canadian province of Quebec. Last week, Quebec introduced a “burqa ban” — a prohibition against Muslim women wearing the full-face covering (which is actually called a niqab, not a burqa) in the public sphere. The law bans those working in public service or using public services from wearing veils or any sort of facial covering. Teachers and doctors, and anyone else who works for the government, would be subject to the law, as would anyone taking the bus.

Similar bans have been passed across Europe, like the national ban on burqas in schools in France, and the total ban on full-face veils in France and Belgium. When the bill was passed in the Belgian Parliament, lawmakers cited security reasons for the ban, also claiming the veil is a tool of oppression.

But the ban in Quebec is the first time such measures have been taken in North America.

Officials have cited social cohesion as their excuse for the ban. “This is a bill about living together in harmony,” said Quebec’s minister of justice, Stéphanie Vallée, who sponsored the bill. “It’s a bill about guidelines and clearly establishes neutrality of the state.”

But it’s a flimsy excuse at best. First of all, the number of women actually affected by this ban is minuscule. As Ihsaan Gardee, executive director of the National Council of Canadian Muslims, explained to The New York Times, “We don’t have hordes of women in niqabs trying to access or work in public services.” The ban is “an unnecessary law with a made-up solution to an invented problem,” according to Gardee.

We Jews especially should stand up for religious liberty rights, regardless of what that faith is. We especially should be in the business of opposing legislation like “burqa bans,” because any attempt to get a minority religious group to assimilate inevitably affects Jews as well.

Already in France, the law applies to Jews. In France, the ban doesn’t just include burqas and other Muslim religious symbols. The French believe in the concept of laïcité, or secularism in the public sphere. This means that all overt religious symbols — including large crosses and yarmulkes — are banned from public schools.

Unlike France, Canada’s law doesn’t target all overt religious symbols; it only bans women from wearing a facial covering while working in or partaking of public services. But precisely because it only seems to target Muslims, one has to wonder: Is social cohesion really the goal here?

I don’t think so. It’s more likely that this legislation is Canadian officials testing the waters before jumping in with both feet; we will very likely see an actual burqa ban before long.

And why would Quebec be pursuing anti-Muslim legislation against its scant Muslim population? A French-speaking province, Quebec maybe styling itself after France. As is well established, France’s Muslim population has struggled to assimilate into French culture.

With these bans against an almost nonexistent niqab-wearing population, Quebec is likely trying to avoid the same fate France is facing, along with other European nations. This burqa ban suggests an unholy calculus: If Quebec becomes inhospitable before large numbers of Muslims arrive, maybe the Muslims never will come.

The discriminatory ban received such a backlash that officials were forced to walk it back. “No one will be thrown off public transit, denied emergency healthcare or be chased out of a public library,” Vallée told reporters on Tuesday. “We do not have the intention of setting up an uncovered-face police.”

That this had to be explicitly clarified is horrifying. Instead of discriminating against Muslim women, Quebec should look south to the United States, where religious freedoms are protected and, as a result, Muslims are much better assimilated.

And as we saw in France, these bans don’t just affect Muslims, but almost certainly will come to affect Jews who also cover their heads for religious reasons. If Canada proceeds down this path, Jewish men will no longer be able to wear yarmulkes, and religious married women will be banned from wearing a sheitel or scarf.

If Jews are interested in practicing some ideological consistency, not to mention preventing ourselves from becoming collateral damage in a misguided attempt to assimilate Muslims, this is just the kind of legislation we should be pushing back against. We’re too well acquainted with religious discrimination to bow out of this one.

It’s time for Jews to stand up for Muslim women.