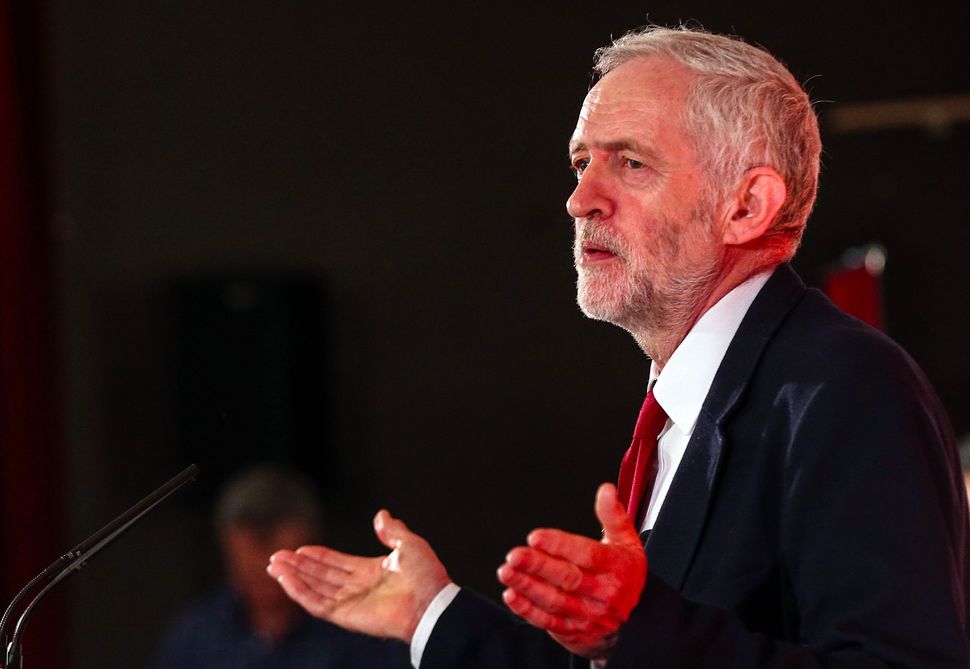 As an anti-Zionist and pro-Palestinian politician and activist for decades, British Labour leader Jeremy Corbyn has inevitably attracted at least some genuine anti-Semites to his party’s ranks. (Veteran pro-Zionist, anti-Palestinian politicians inevitably attract at least some genuine Islamophobes.) In an article last month in The Guardian titled “I will root anti-Semites out of Labour – they do not speak for me,” Corbyn himself admits, “We were too slow in processing disciplinary cases of anti-Semitic abuse, mostly online, by party members.”

He’s had to apologize or explain his way out of numerous incidents that many believe tied him to anti-Semites and their worldview. Plainly, the British Jewish uproar over Corbyn is not just an exercise by his political enemies; plenty of left-liberal Jews who are alienated by Israel’s behavior suspect him of being an anti-Semite to one degree or another.

This is especially so since August 23, when a 2013 video surfaced in which Corbyn says of a group of British “Zionists” that they “don’t understand English irony” despite “having lived in this country for a very long time, probably all their lives.”

The remark, made at a London conference sponsored by the Palestinian Return Centre, has caused outrage like nothing else he’s done or said. It’s being treated as the smoking gun in the case against him as a Judeophobe.

“When he implies that, however long they have lived here, Jews are not fully British, he is using the language of classic pre-war European anti-Semitism,” said the former British chief rabbi, Lord Jonathan Sacks. He called it the “most offensive statement made by a senior British politician since Enoch Powell’s 1968 ‘Rivers of Blood’ speech,” which was something out of a Ku Klux Klan rally.

Deborah Lipstadt, a renowned historian and debunker of Holocaust denial, wrote in The Atlantic (“Jeremy Corbyn’s ironically ahistorical anti-Semitism”) that the remark was Corbyn’s “lowest blow.”

“Corbyn may have said ‘Zionists’ and not ‘Jews,’ but listening to the speech, the two seemed interchangeable. It wasn’t their ideology he attacked, but what he deemed their lack of Englishness,” she wrote. “It was this latest recording from Corbyn that left many Jews utterly convinced that this was a man in whom contempt for Jews ran deep.”

On seeing the video, I, too, concluded that Corbyn’s remark was damning. Linking to a New York Times op-ed (“Getting off the fence about Jeremy Corbyn’s anti-Semitism” by the Sunday Times of London’s Josh Glancy), I wrote on Facebook, “I have to agree with this op-ed 100%, both with the writer’s not wanting to view Corbyn as an anti-Semite and his conclusion that this latest revelation makes it unavoidable.”

But I wrote this without being aware of the context of Corbyn’s remark, which was missing from Glancy’s op-ed and so much of the coverage of the video. Once I learned of that context, I retracted my opinion.

Knowing to whom and to what Corbyn was referring in his “English irony” remark makes it impossible, in my view, to consider it anti-Semitic in any way.

He was referring to an exchange that had taken place recently at a conference on Gaza that he hosted in Parliament. One of the speakers there, Manuel Hassassian, the Palestinian ambassador to the U.K., reportedly said, “You know I’m reaching the conclusion that the Jews are the children of God, the only children of God and the Promised Land is being paid by God! I have started to believe this because nobody is stopping Israel building its messianic dream of Eretz Israel to the point I believe that maybe God is on their side.”

Clearly, he was not being serious; he was being ironic.

Just as clearly, Hassassian is not a native Englishman. He was born and raised in Jerusalem, didn’t live in London until he was over 50. He speaks with an Arabic accent.

This is the crucial thing to know in order to understand what Corbyn says later at the Palestinian Return Centre about the Zionists in question and English irony.

As seen in the video, Corbyn recalls that after Hassassian’s speech in Parliament, some Zionists in the audience “berated” Hassassian for what he said. He then makes his infamous comment, but he does so in direct comparison with Hassassian, noting that those who berated the ambassador “don’t want to study history, and secondly, having lived in this country for a very long time, probably all their lives, don’t understand English irony either.” By comparison, Corbyn went on, “Manuel does understand English irony, and uses it very effectively.”

This context reveals that Corbyn was not calling out Jews; he was not even calling out Zionists in general. He was calling out those particular Zionists who’d berated Hassassian.

After the video came out, Corbyn explained that he had meant to “defend the Palestinian ambassador in the face of what I thought were deliberate misrepresentations” by people “for whom English was a first language, when it isn’t for the ambassador.”

“I am now more careful with how I might use the term ‘Zionist’ because a once self-identifying political term has been increasingly hijacked by anti-Semites as code for Jews,” Corbyn conceded.

Knowing the context of his remark, I don’t see how his explanation can be rejected.

Labour’s leader can be rebuked for lots of things, such as having made well-paid appearances on Iran’s propaganda station Press TV. And it goes without saying that he has a history of political antagonism toward Israel. But there is no evidence that he is an anti-Semite, and there are many indications as well as testimonies from his British Jewish supporters to the contrary.

Calling someone an anti-Semite is an awfully potent defamation of character. It should be used only with severe caution. In this case, Corbyn’s rough but clean political rejoinder was distorted into a now infamous anti-Semitic slur by lifting it completely out of context.

I’m sure only a tiny proportion of those convinced by this latest “scandal” that Corbyn is an anti-Semite are aware of that context. But by now, this defamation of his character, this branding of him as an old-fashioned Jew-hater, is probably indelible.

Larry Derfner is an American-born journalist in Israel and the author of the 2017 memoir “No Country for Jewish Liberals.”