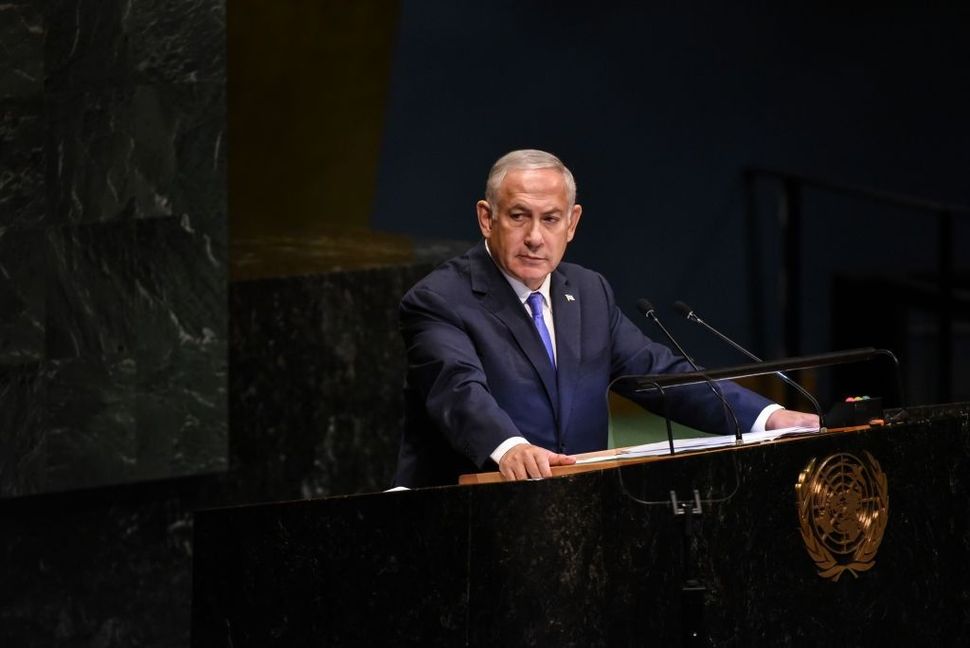 Benjamin Netanyahu, Prime Minister of Israel applauds U.S. President Donald Trump during a speech at the United Nations during the United Nations General Assembly on September 27, 2018 in New York City. World leaders are gathered for the 73rd annual meeting at the UN headquarters in Manhattan. Image by Getty Images

On Sunday, Israeli Prime Minister Benjamin Netanyahu began his weekly cabinet meeting with a moment of silence and said that “Israel stands together with the Jewish community in Pittsburgh, and with all Jewish communities in the United States, and with the American people.”

Netanyahu then talked about anti-Semitism in America, Western Europe, and the battle with Islamic extremism. He said he was “appalled by the loss of life in this horrendous anti-Semitic attack.”

But just four days earlier, speaking at the General Assembly of the Jewish Federations of North America in Tel Aviv, he said the biggest threat to the Jewish diaspora is the loss of their identity, and implicitly attacked Reform and Conservative Jewish communities in America who petition the Israeli supreme court to expand prayer rights and to break the hegemony of the Israeli Orthodox rabbinate.

The horrific massacre that happened Saturday in The Tree of Life Synagogue revealed a deep dichotomy in the way Netanyahu views the Diaspora. Netanyahu no doubt feels genuine sadness, and a desire to unite with American Jewry in their time of crisis. But he never stands up for these very Jews in other contexts.

Why fight for their safety but for not their values?

In his decades of political life, including his twelve years as Israeli Prime Minister, Netanyahu has sown fear and division in Israel and in the Jewish community in order to stay in power and push his extreme right-wing agenda. He doesn’t often speak him mind on the subject, yet he consistently frees the reigns of his government to fulfill their most divisive biddings.

If Netanyahu is the mouthpiece, then in the heart of his government beats a messianic, xenophobic heart.

This duality — of saying nice words about unity while pushing monolithic, anti-Diaspora policies — has been Netanyahu and his government’s main modus operandi when it comes to American Jewry. To the world, they represent Israel as a democratic, tolerant, multicultural state which unites all Jews. But in reality, Netanyahu and his government are working relentlessly to create a state where Jewish Orthodoxy is the only recognized institution, to curb rights of minorities, and to alienate the Jewish diaspora, especially American Jewry.

Though many criticized the choice, it is actually fitting that Naftali Bennet, the Minister of Education and of Diaspora Affairs — the minister of Jews as he likes to call himself — flew on behalf of the Israeli government’s to Pittsburgh.

Bennett, the head of the Jewish Home, a messianic, hard-right party that gets the lion’s share of its votes from settlers, famously, and shockingly, said that he is less worried about Iran than Jewish assimilation.

These are typical sentiments. Minister of interior Aryeh Deri, said about Reform and Conservative Jews — the Tree of Life is Conservative — that, “if this is Judaism, I don’t want any part of it,” since these Jews are leading to the demise of Judaism.

Deputy foreign minister Tzipi Hotoveli has also attacked American Jews, saying they’re “people that never send their children to fight for their country” and that “most of them are having quite convenient lives.”

Even in the wake of Saturday’s massacre, many officials, although offering their condolences, stopped short from calling the Tree of Life a synagogue.

This is the Israeli government’s modus operandi.

Netanyahu speaks in flawless English to American Jewry about unity and inclusivity, while in Hebrew, his ministers incite their religious, right-wing base against non-conservative Jews.

To many Israelis, American Jews are of a lesser stock; in fact, the term “Diaspora” is meant to signal that wherever they live, whether it’s America or France or Ethiopia, is not their home; that they are weak and need saving.

This sentiment was exemplified by Netanyahu’s audacious cry to French Jews to move to Israel after the Paris terror attacks, or when he insisted on creating a diplomatic flashpoint by speaking in front of Congress against the Iran deal, saying he was speaking for “all Jews.”

But the hypocrisy doesn’t stop with American and world Jewry.

Shooter Robert Bower’s anti-Semitism was supplemented by a deep hate for immigrants. His motive for action, according a post he put online hours before the shooting, was HIAS, the Hebrew Immigrant Aid Society, for “(bringing) invaders in that kill our people.”

“I can’t sit by and watch my people get slaughtered. Screw your optics, I’m going in,” he wrote.

HIAS was founded in 1881 to help Eastern European Jews flee pogroms. In recent years, they have been helping refugees from all over the world, including Honduras, where the migrant caravan began its slow, dangerous journey to the United States southern border.

Like HIAS, American Jews by and large support immigration as a human right. But Israel under Netanyahu has assumed a much more nationalist, ethnocentric, messianic attitude than under previous administrations.

Minister of culture Miri Regev referring to Sudanese asylum seekers as “cancer in our society.” While Israel’s government loves to paint its country as tolerant and inclusive safe haven for Jews, when it comes to other migrants, Israel has taken a stance much in opposition to HIAS’s mission.

In the cabinet meeting, the government decided to halt humanitarian status to refugees from Darfur, which will allow Israel to deport them back to Sudan.

This past year, Netanyahu gave a king’s welcome to nationalist leaders like Hungary’s Viktor Orban, the Philippines Rodrigo Duterte, and Guatemala’s Jimmy Morales.

In the wake of this horrific attack, American Jews have a choice: come together around ideals of unity and humanity, or fall for a demagoguery of hate and xenophobia peddled by politicians who thrive on division. Judging by the way Jews have persevered for centuries, the choice is quite obvious.

Etan Nechin is an Israeli journalist and author